In my quest to continue procrastinating rather than finishing up the writing of my PhD thesis (I have two weeks left!), I write yet another review.

RPGs are hard to review because so much of the experience is contextual to the group. With a single player video game, or a film, at a certain level everyone sees the same thing, though they may reflect upon it differently. Consequently if you read a lot of rpg reviews on somewhere like RPGnet.com a lot are really book reviews. They outline the content of the book and the review the writing style. It’s ok, but is it really better than the list the mechanic type reviews you get for board games?

I am not going to talk at great length about Dungeon Crawl Classics (DCC) mechanics here, or how the book is structured. What I want to consider is what does DCC set out to do? And how does it achieve it?

I sometimes classify rpgs into two groups. The first group are what I call universe in a book type games. The book describes the Starwars universe and gives the players rules to carry out every kind of interaction imaginable in that universe, whether thats hitting something with a lightsaber, or negotiating a trade tariff. It is then up to the GM to work out what kind of story or game to create around those rules.  The other type is a game focused on delivering a specific experience. A good example of this is Fiasco, an RPG about improvising a script for a Coen Brothers movie. Fiasco tells the players what the game they are going to play is, they cannot choose between an adventure story or a detective story, they are limited to the relationships between characters as defined in the game and the tropes of Coen movies. Dungeon Crawl Classics is closer to the Fiasco type of game than the Starwars type. You cannot choose to play the intrigue of A Game of Thrones, or epic of the Lord of the Rings, the players are going to leap across pits of lava and cut the tongues out of giant rainbow coloured Iguanas and then bludgeon the the witch queen to death with them. This is Wiz-War not Descent.

The game achieves this tone and focus through its art and rules. On the back cover is this dude; 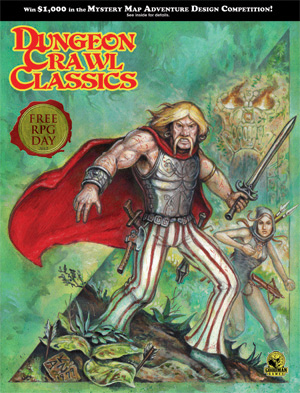 When I introduce people to the game, I generally just show them this image as it tells them most of what they need to know about DCC.

It is in the mechanics too. Starting adventures in DCC are a lot like the Japanese game show Takeshi's Castle. You start with a hoard of level 0 characters, four per player, each can die in one hit, you then charge them through a gauntlet style dungeon and see who makes it to level 1 and the choice of a character class at the other side. This is focus, it only works in a dungeon crawl situation. The magic system is another great example. When a wizard casts a spell, if he or she rolls badly they could turn themselves into a newt, if they sacrifice some of their player stats, burning their strength from 10 down 6 and then roll well, the fireball could become a veritable volcanic eruption spewing forth from their hands killing everything in a 5 mile radius. It is a chaotic game, not the stable experience offered by D&D 5e.

DCC is a compromise between Old school and New School flavour Dungeons and Dragons style games. The core rule set is Dungeons and Dragons, you roll a D20 to kill stuff and test your stats. It is old school in the sense that you can die easily from bad luck, the rules are simple (30ish pages of essential rules) and require the players and GM to bring their own interpretation. On top of that the encouraged universe is otherworldly, rather than the neatness of modern fantasy.  It is new in school in some of its numbers, armour class is ascending, skill tests are roll high. It also allows the players to mitigate the chaos. Players are given four starting characters for a reason, it lessens the sense of loss at a character death.

I’m running out of steam on this review, so i’ll bullet point some of the things people usually comment about.

The book is HUGE. Because I bike to games, this a key reason the game gets played less than Astonishing Swords and Sorcerers of Hyperborea. It is big to heft around. The actual core rules are short, but there are many tables, great playing ideas and extra rules. Reading the whole thing will take a few hours.

There’s lots of tables. This is a great way the game injects madness into the experience. Wizards roll on tables to determine the consequences of their fraternizing with unknown forces. There are also several character specific critical hit tables. This can be a downside for the GM, flipping between pages and rolling dice.

There’s custom dice.  When players level up they get to throw bigger dice, a D20 improves to a D24. This is great, but you have to buy these custom dice, or improvise them using regular dice and maths.

Really though, whether you should get into DCC or not depends on whether you want its specific brand of fantasy and its focus on dungeon crawling or something else. Do you want something zany with high character mortality or something that fits modern fantasy tropes where the players have a high degree of control over their fate?

A brief word on the modules

I never run modules, I write my own material, but I do read them. I’ve read three DCC modules, Sailors on the Starless Sea, Jewels of the Carnifex and Emirikol was Framed. A lot of RPG players don’t have the time to write tons of their own material so the quality of the modules matters. Each module delivers a one session linear adventure. The players will move through a wizard tower, or ruined castle containing about a dozen encounters. I say they are linear because a varied experience isn’t on offer here. The party cannot plan a multitude of different routes through the dungeon and exploration is limited. What these adventures do offer is lots of ingenious encounters and a good narrative hook at the start. The players investigate a ruined temple after being given a note, before they know it they are decrypting the ramblings of a mad hermit, or fending off waves of insane mutated warriors. Its imaginative stuff but some of it is pretty tough. I expect if I did run some of the higher level adventures for my group they would all get killed pretty quick, so you might have to temper the challenge depending on your groups play style. Despite their linear nature, they do have some replay as players can react to situations in different ways. All three are of decent quality both in their written content and game design.

Fellow Fattie Bryce Lynch has typed his thoughts on a number of DCC’s modules http://tenfootpole.org/ironspike/?p=2326.

If you are still unsure about DCC, here are the beta rules http://www.goodman-games.com/downloads/DCCRPGBeta060811.pdf

The difference between the beta and the actual book is mostly formatting and a few clarifications. There might be some mechanics changes but not enough to skew your judgement.

* I do not claim to have any knowledge of Beat Takeshi's rpg leanings.