The State of Laser Tag: Real-Life FPS is Now a Thing 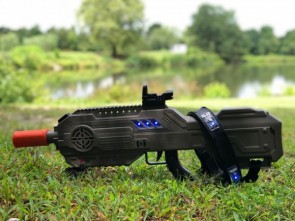 There Will Be Games
Last month I went to a new indoor laser tag place with my kids here in Greenville, SC. It was sort of fun, but I could not help wonder how is it that in the age of the smartphone and home drones, laser tag has managed to remain so stagnant. I was happy to learn I was wrong. However in this new local arena all you could do was shoot at other players with one weapon, to get one kill, for one point. It literally was like playing "tag" with “lasers”. If you get tagged there is a 5-second respawn. And that’s it; tally up scores at the end. The only variety added to the simple formula was that each player was allowed to “destroy” the base three times per game. Destroying the base counted for 10 points. The blasters didn’t even have sights, so spam-shooting was required to see where the shots landed and make corrections accordingly. This, in the summer of 2018; when kids are basically born knowing how handle gadgets and play video games. Talk about a market gap waiting to be exploited.

The following week found me researching the developments in laser tag. I’ve had 6 Nerf Laser Tag LTX blasters at home for a long time. Those have been fun but I acquired them about 5 years ago, surely there must be something new by now, I thought. For perspective, that was about the time I Ieft the Fortressat scene, as Kickstarter was becoming a dominant force in board games. With gamers throwing piles of cash at first-time game designers who knew nothing about manufacturing or supply chain logistics. Now I’m piecing together other crazy occurrences that have happened since, like Asmodee buying up all the good Ameritrash publishers, Barnes falling in love with Games Workshop all over again, and a recent rebranding of the Fortressat name. It’s a lot to take in.

Anyway in my research I found that last year saw the release of the Recoil laser tag system; which required the use of a smartphone and a WiFi hub, but supposedly allowed for airstrikes and hand grenades. Then I read how the glitches in the app basically killed it. At the time of this writing it is being sold deeply discounted, (never to be produced again I assume). There is a Facebook community of coders currently developing a companion app to make Recoil work as intended. They seem to be making good progress, but I’ve been let down too many times by community projects to pin my hopes on the nearly defunct Recoil system. Who knows, they may yet surprise us.

Then I read about the BRX tagger: Produced by Battle Company, a major player in the commercial laser tag space, but designed for the prosumer. It looked very good on paper, but there wasn't much info out there on these units. You could say these guys are a lot better product designers than they are marketers, a welcome flip to the status quo. Making things worse, the BRX units are expensive at $380 per player. Who in their right mind would buy this? Fast forward two additional weeks and I have four of them at home.

Now I’m here to tell you that if you’ve ever enjoyed playing First Person Shooters, I can pretty much guarantee you will love this product; and you are missing out if you haven’t wielded one of these rifles. The BRX comes equipped with a real reflex sight, and it feels and sounds amazing. You could mistake it for a glorified cosplay prop, but in reality it's an FPS enthusiast's wet dream.

Out of the box you can Play Team Deathmatch, Free For All, Infection and Supremacy (a.k.a Class-based Team Deathmatch). It’s just the one rifle, but it comes equipped with all sorts of weapon profiles like assault rifle, sniper rifle, SMG, shotgun, grenade launcher, heavy machine gun, energy weapons, concussion grenades (my personal fav), medkits, EMP grenades, poison, freeze rays, etc. Weapons have Rate of Fire, Damage, Clip Size, and Accuracy attributes. Each weapon really does feel different because of the crazy good sound effects provided by a booming speaker on the rifle; with the rumble-pack sweetening the illusion as you feel each shot fired. The rifle is also equipped with an accelerometer that allows for melee attacks with the butt of the rifle and hitting the rifle on the side several times to help clear a gun jam. It also has a physical cocking lever used for reloading.

The included headset not only receives hits from an opposing rifle, but can also “emit” hits. And this my friends, is the secret sauce. This is how Battle Company is able to provide such FPS staples as splash damage from grenades, a sniper shot going “through” someone and hitting the person behind, the shotgun being deadly at close range only, melee attacks, and other things not usually found in laser tag. It all works seamlessly. The range on these blasters is 550 ft in broad daylight to a couple of thousand at night. You better mount a scope on it if you are planning on using the full range.

If it all sounds too good to be true its because it almost is. Battle Company has been developing their system for something like 5 years now, and I think the only reason a small company like this was able to develop this product isolated from competition the likes of Microsoft or Google, is because "guns" are a hyper-political subject. When it comes to large companies, fear of the Twitter mob takes precedence above all other considerations. It’s the only explanation I can come up with as to why it took so damn long to bridge the gap between video games and laser tag.

I am planning on eventually writing a review on the BRX. In the mean time, I’d like to know if the Atlanta Fortressat crew would like to get together for some 2 vs. 2 action, so some of you can experience what I’m writing about; and call me out if you feel this is all just hyperbole.

There is someone in Marietta, GA that has two BRX’s, so if we contact this person, we may be able to go 3 vs. 3.

Looking forward to some games!
There Will Be Games

Galdred replied the topic: #279295 06 Aug 2018 07:37
I haven't seen any vest on their site. Can the rifle record hits that are not headshots?
It looks amazing, if you have a large area to play in, but the price point sure is dissuasive.

El Cuajinais replied the topic: #279301 06 Aug 2018 09:13
There is no vest in this system. The head sensor can register hits 360 degrees and then there is one additional sensor in the blaster itself, right above the muzzle. So most of the time you will be aiming for headshots. The blaster is very precise, it uses a Class 1 Infrared Laser, unlike toy grade laser tag blasters that use IR LEDs with a lens in front. You need to be precise with your aiming otherwise you will not score a hit. This increased precision and range add to the cost of the product of course. In one of their videos, the creators provide their rationale for going with head sensors instead of vests. Vests are a lot more easy to cheat with. This coincides with my experience with the original laser tag system from Worlds of Wonder during the 80’s. The head sensor prevents peeking behind cover without exposing oneself to being tagged; which is what crippled the fun and suspense of my Nerf LTX games.

The sensor on the blaster dissuades blind-firing from cover and exposes yourself even when firing through a narrow slit in your cover. I have also used it to successfully tag players whom I have an angle on, but aren’t aware of my presence. When they raise the rifle to shoot at a teammate, I can see a side view of their rifle from my vantage point and tag it.

A vest would be interesting but then there are sizing and body-shape considerations, even if it is just straps like original Worlds of Wonder version. I think the added complexity and cost is not worth it for now because like you stated, the price point is dissuasive already. If the product takes off, I would not be surprised to see future hardware expansions like torso sensors. They seem to have hand grenades and swords in development but not for sale yet.

I remember seeing the Recoil stuff at the store and being tempted, but then the price dropped so fast that it sent warning sirens off.

Sagrilarus replied the topic: #279313 06 Aug 2018 10:25
The audience isn't big enough for a Microsoft or a Google to go after, and frankly they shy away from manufactured products. If they can't make software do the job they aren't going to wade in. Microsoft wouldn't even go after a smart phone with billions of customers in the target market, opting to purchase a prior manufacturer instead.

I played years back (and wrote a article here on it) with professional gear that a guy had set up in the trunk of his car. You played in your own back yard and his gear was far superior to the stuff you find in the indoor venues. He could load ammunition counts, semi or full auto, plus time for the gun to restart after you were hit up to and including permanently shut down. This was maybe 2009.

But, you certainly couldn't turn the weapon into a shotgun or a sniper rifle. So the state of the art continues to progress. Given that the state of the art in 2000 was reasonably entertaining for 9-year-olds it makes sense that these more high-tech versions would be pricey, as they're marketed to adult males looking for an alternative to golf. A fine choice, and cheaper.

SuperflyPete replied the topic: #279318 06 Aug 2018 11:09
I remember when LazerTag came out, with their guns that looked like KITT from Knight Rider. My cousin got a set and we used to run around playing that all summer long.

Now they have Simunition, which is actual pistol,shotgun,and rifle cartridges for real firearms. Shoots paintballs, is non lethal. It's for training, but some clever lads have brought it to shooting ranges and have set up "haunted house" type games. Shooting zombies and whatnot.

the_jake_1973 wrote: This is another tag system on the market.

Trying to insert this Real Genius MEME here but I've not been able to make it work:

SuperflyTNT wrote: Now they have Simunition, which is actual pistol,shotgun,and rifle cartridges for real firearms. Shoots paintballs, is non lethal. It's for training, but some clever lads have brought it to shooting ranges and have set up "haunted house" type games. Shooting zombies and whatnot.

The very thought of the safety concerns of using real firearms shooting simulated ammunition at other people is mind boggling. I certainly see the appeal, but man you'd need some crazy tight controls...

But back in topic, had a set of the classic Lazer Tag, we put the hat on my friend's little sister and chased her around. The stuff worked like crap outdoors, though.