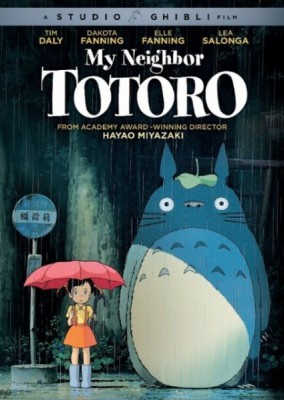 "Thank you for all you've done for Mei. Please look after her and protect her forever."

If you've heard of Studio Ghibli, then you've heard of My Neighbor Totoro. This is their most widely known film. It is a fairy tale. It has some adventure. It has magic. It has an abundance of cuteness. It is for kids. The plot is fairly simple.

A father and his two children move into a somewhat dilapidated house in a remote and rural area to be close to their wife and mother who is recuperating at a near by hospital from an illness that is never named. The father is stressed by having to handle the children, his job which is now a long bus and train ride away and worry for his wife but he is loving and indulgent of the girls. The children, also fearful regarding their mother, spend much of the time exploring their new environs with all the enthusiasm and gusto of youth.

Mei, the younger, and then Satsuki encounter a woodland spirit called Totoro and befriend him. He is big. He is furry. He is loud. He is magic. He is above all, cute. They also meet his friends; some miniature totoros and the most odd and to me disturbing 12 legged cat bus.

The main drama in the movie revolves around the childhood fear of losing one or both parents. Dad being delayed and missing his bus. Mom getting sicker. Mei getting lost. All reflecting the one big fear that all children have. It is when these fears become the strongest for the girls that Totoro and his allies become most active in order to help and soothe them. Which of course makes us love Totoro, and his mile wide grin, all the more.

As I've said, this movie is aimed squarely at kids who the world over have loved and will love it. As and adult it is certainly endearing and watchable but it isn't complex dramatically.

*I was curious so I looked up exactly what a Totoro is. Apparently it is based on a creature from Ainu folklore. The Ainu being the indigenous people of the Japanese islands who now live mostly on the northern island of Hokkaido. The Totoro or Koropokkuru lives in groves of Butterbur plants and use their leaves to shelter from the rain, explaining Tororo's leaf umbrella. They bring good luck.*

ubarose replied the topic: #280295 24 Aug 2018 12:43
The mom has tuberculosis. The time period of My Neighbor Totoro coincides with the discovery of effective antibiotic treatment for tuberculosis. Just a few years earlier, mom probably would not have survived.

Knowing this adds another layer to the themes of fear of loss, and of hope and innocence in the movie.

mc replied the topic: #280331 24 Aug 2018 18:36
I know it's for kids, and it's not complex dramatically, or thematically, but this is still one of my favourites. it doesn't over explain in the way a lot of western kids films do (and adult films for that matter). But it communicates those common kid concerns so well. I love that there is no real antagonist - the adventure is all in the kids' world. It probably helps that i have kids exactly the right age for this and we first watched it with them having made a move to the countryside. I think it's just about perfect for what it is.

Even if the catbus is weird.

Also, i think I changed my mother's perspective on Japanese animation with this one. This is a far bigger deal than it sounds.

Dr. Mabuse replied the topic: #280346 25 Aug 2018 04:35
I watched this with my kids over 40 times, when they were the ages of the two girls. I love this movie so much and the music by Jo Hiasashi (sp?) is breahtakingly beautiful. It's been years since we watched it, but I would probably bawl throughout the entire thing. It reminds me of a time that is long gone and one I wish I had revelled in more at the time.

Aarontu replied the topic: #280408 26 Aug 2018 00:02
I really liked this move as a kid, and I just had the pleasure of showing it to my own kids and seeing them enjoy it, too. The movie really conveys a childlike sense of wonder and conveys the story in a way that makes me feel like a kid again.

Frohike replied the topic: #280410 26 Aug 2018 01:42
The part that strikes home for me during this film is the brief blowup between Mei & Satsuki, when they’re both trying to process their fear & borderline grief in different ways, with Mei being obviously a little less aware of what’s happening. It’s a moment that directly leads into the next act of the movie, with Mei getting lost, etc. and Satsuki desperately trying to hold it all together.

This constant toggling between hope, playfulness, and total dread is such a real part of childhood when dealing with illness, grief, or parental instability & Miyazaki has an amazing capacity to remember what this feels like and a masterful ability to bring it to the screen. The pairing of these two strengths reminds me of Truffaut’s 400 Blows, and I think Miyazaki’s best work belongs in that tier of “auteur” directors.

mc replied the topic: #280413 26 Aug 2018 03:20
That scene (the sibling fight) is so real. You're spot on about the grief processing - but as well because the boy is a part of it too - the older kids kind of run off, and the younger one is left behind, mostly unintentionally, but, not entirely. Which encapsulates a lot about these films. There are unresolved patches of grey everywhere.

jeb replied the topic: #280419 26 Aug 2018 12:30
It's a wonderful film and a great example of a film that genuinely seems not made for adults. Pixar films—I love them—as do the kids, are definitely produced with adult audiences in mind. Lots of jokes and situations for the adults in there to enjoy and appreciate. But this one seems so dialed in to the childhood experience of life and change that you can't influence at your age. Though you will of course try with some ritualized acorn placements and intoned magical words.

Also great for kids with "monster" scares because Totoro is a huge monster and turns out to be pretty nice.

They have a mesmerising ASMR quality to them that I can only describe as electric Valium.

I used to get annoyed when watching them with friends and they would pass out in the middle of the film. But now I understand and appreciate this quality about the films.