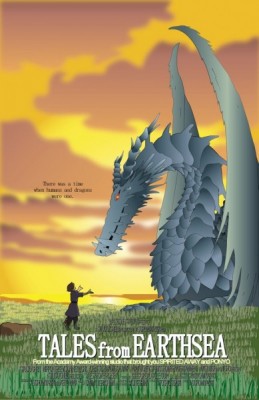 There Will Be Games
"This life that is both our torment and our treasure was never meant to endure for eternity."

So close. This movie comes so close to being great but it misses mark.

The first and greatest sin of the movie is it's inexplicable squandering of it's source material. Earthsea is a setting created by famed writer Ursua K. Leguin in the mid 1960's where the known world is a giant archepelego with each island having a unique and distinct culture and not necessarily with European analogs. The population is also described as having diverse ethnicities not merely psudeo Britons. The movie, baffling for a studio that has created some of the most vibrant and imaginative world's in film history, boils it down to an unremarkable and trite eurocentric fantasy land.

Disney, who distributed this movie in the US and is responsible for the English voice overs, has once again enlisted some big name actors and actresses. In the past, these actors, unaccustomed and perhaps dismissive of working on an animated feature, sometimes sound as if they are phoning it in. That has never been more apparent than in this movie. Willem Defoe does an adequate  job as the villain, Cob, but Timothy Dalton is utterly flat as Sparrowhawk. His monotone performance reminded me very much of Liam Neeson as Qui-gon Jinn in the Star Wars prequels. That is not a good thing.

The story itself is almost a rote "hero's journey" where a young lad meet a wise mentor, goes on a quest, confronts a great evil and is bested but later comes back and is triumphant. I've no problem with that. It's a formula that has been done to great effect in many stories and films including the original Star Wars. There a few unique elements though. The most prominant is that the hero is first shown assassinating his own father, the great and wise king of the land, and stealing his sword.

The boy, Prince Arren, is filled with rage whose origin is not explained and this side of his personality takes the form of an identical spirit that stalks and persues him. Or is the spirit his good nature and his physical self is the one powered by hate? It's tough to tell. Sparrowhawk, the mentor to Arren, is the most powerful mage in the land and has spent his life seeking something though that something is never named either. The one character that is clear is Cob, the villain of the piece, who seeks eternal life and believes this can be achieved by ensorcelling Arren and using him...somehow...to open the doors to the land of death and thus grant Cob immortality.

Then there is the confusing bit at the end where Cob has been defeated and Arren's girlfriend, Therru, is killed but isn't killed and then turns into a dragon but then turns back into a girl and is seen living a simple life on a farm during the closing credits.

We have the theme balance throughout the film. Man in balance with nature, light balancing dark, and most prominantly life balancing death. That only by accepting our mortality can we appreciate life.

It is.... and one that's far, far better expressed by LeGuin, without those obvious tropes.

This one sends me to sleep for some reason, I just lose interest I guess.

I enjoyed some of the animation though, in particular Hort town (I think?) - the settings are really nice.

Sagrilarus replied the topic: #284460 22 Oct 2018 22:08
LeGuin is perhaps the most underutilized author of the 20th century. Several of her books should be stunning films. Don’t know why they aren’t.

Sagrilarus wrote: LeGuin is perhaps the most underutilized author of the 20th century. Several of her books should be stunning films. Don’t know why they aren’t.

No one's figured out how to Disney them up yet? I'll pass. I don't really need to see the woke version of Earthsea. It's a beautiful and wonderful thing, but there's too much to play with there...every middling lit class instructor last 2 years of high school and fresh and sophomore year chewed this into an unrecogizable mess peddling their own clever take and charting of all the symbolism.
Read More...