Heroscape: The [Greatest] Battle for All Time 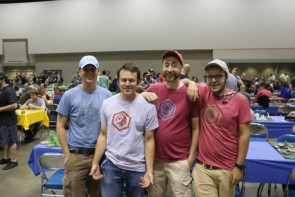 “Happy birthday, dude.” Phil drops a garish box onto my lap while we’re seated in his early 2000s blue VW beetle. It’s heavy. It’s stupid. It’s covered with a picture of samurai, dragons, a Legolas look-alike, some agents straight outta the matrix, some Vikings, an angel with a winged helmet, and an orc riding a T Rex. “Really, dude?” All pre-painted miniatures, and not a tape measure in sight. I look at the back of the box and read the story. It sounds like something I’d have written when I was ten years old. ‘All these dudes are on Valhalla. Fighting over wellsprings. THIS IS THE BATTLE FOR ALL TIME.’

I toss it in the back seat and think nothing of it for a couple days, then I crack open the rulebook. The rules are delightfully simple. The most time is spent describing how to stack the proprietary hexagonal terrain and move around it, but it’s all pretty intuitive. Count spaces horizontally when moving or shooting. When climbing, count spaces vertically too. End your movement in water spaces. Roll dice for offense and defense. Skulls in excess of shields count as wounds on the defending figure. Squads have 1 life point, heroes can have more. The dice with 3 skulls and 2 shields and 1 blank are straight out of Heroquest or Battlemasters, both games I had enjoyed in the early 90s.  We had also played Warhammer in the late 90s, but having pre-painted minis and simple rules for line of sight and movement seemed like a breath of fresh air. We had played D&D, Magic the Gathering and Pokemon, so card abilities changing up the rules of the game and the inclusion of a 20-sided die didn’t frighten us.

So we tried it with the suggested scenarios. And loved it. We drove over to Toys R Us immediately to buy more. I bought a pack with a mech, two more dragons, a giant, and a hippogriff. Being an engineer, Phil mostly just bought more robots. The game was kinda dumb, but it was also kinda perfect.

After that first night, I had to know more. I went to Google and quickly found an amazing fan site, heroscapers.com. People were planning tournaments, designing customs, discussing any- and everything about the game, and most importantly to me I found the competitive section. Despite its ease of play and childish trappings, it appeared that the game had great depth as well.

I came back the next time I saw Phil and told him all the units that each of us should keep an eye out for. For the next 3 years, this became our go-to game, and every time any of us would drive past a WalMart, Target or TRU, we’d have to stop and see what they happened to have that week. Starting in October of 2007, I started attending tournaments and making friends all around the Midwest, and eventually started writing my own strategy articles, which got an astonishing amount of support and appreciation. My economics education wasn’t paying the bills yet, but it informed my approach to how to play and analyze a kids’ game.

This mixture of competitive play and wonderful community became readily apparent at any event that I would attend. To this day, I’ve never played in a tournament for any game that featured the same level of friendliness, sportsmanship, and good old-fashioned fun. I don’t know if it’s because the game was popular among pastors and religious types, the conscious efforts of some amazingly nice moderators and tournament organizers, or the simple fact that anyone playing this game couldn’t possibly be taking themselves THAT seriously, but these tournaments truly were (and are!) a class of their own. These events have a way of creating indelible memories.

I have a friend from Iowa who I still see 12 years later as a result of this game. I have another friend I met through the game who had me stand up in his wedding a couple years back. I’m on a first name basis with much of Plaid Hat Games because those guys (save Isaac Vega and his brothers) were all massive Heroscape fans.

Colby Dauch got his start designing customs cards for Heroscape, and despite his spelling mistakes and other issues, he was welcomed warmly and set up Heroscapers.com after a previous fan site imploded. Jerry Hawthorne (Mice and Mystics, Stuffed Fables), Mr Bistro (Dungeon Run, writing credits on most PHG games), and David Richards (graphic designer) were all Admins or Mods on that fan site. The D&D Heroscape waves were designed mostly by Colby, Jerry, and Chris Dupuis (co-designer credit on Risk Legacy, Dungeon Command), and were in my opinion some of the best design work Heroscape had ever seen. I helped test those waves a lot, so I’m probably a bit biased though… You should have seen what else they had designed for classic scape and other IPs that I probably can’t even mention. It would have kicked ass, man.

The D&D waves were not met warmly by the fans. They felt, perhaps rightly, that the game was being co-opted by one of Wizards of the Coast’s big brands, and that the scale was completely off for these repurposed D&D minis compared to classic ‘scape. This disconnect between my love of the design of these units and their cool reception caused me great distress and caused me to withdraw from the community and focus on Summoner Wars. The Marvel units released earlier met a similar fate. Sometimes I wonder what would have happened if the Marvel stuff kept coming out and was still going when the MCU really dropped in theaters. Maybe we’d still see it in stores today.

But in a way, we kind of do. Remember those customs I talked about? The community is still churning out excellent peer reviewed and tested customs, in some cases perhaps more rigorously than the official units. That community survived the retail death of the brand and some of its staunchest fans and organizers moving on. I can’t help but think that the original massive size of the launch in big box stores meant that that hardcore center of players would remain larger than similar games that were limited to hobby releases.

But sadly, some of the plastic terrain is starting to become brittle and hard, depending on how you stored it. I’ve broken a number of pieces when I’ve tried to bring it out or tear down maps. Some people think that 3-d printing will be a solution to the terrain problem in the future; they’re always looking for a way.

If it weren’t for Heroscape, I wouldn’t be here, and likely neither would Plaid Hat Games.

Discuss this article
Log in to comment
Posts in discussion: Heroscape: The [Greatest] Battle for All Time

Jackwraith replied the topic: #292362 15 Feb 2019 10:58
Thanks for this. It's a great insight into a game I've actually never played. It reminds of the Epic: Armageddon community that edited and improved a ruleset and added new army lists to the game, both while it was being produced and for years after its demise. Like Heroscape, it was all done for love of the game and produced a lot of the same level of positivity that you're reminiscing about.

Jexik replied the topic: #292364 15 Feb 2019 11:08
As much as I talk about the tournaments, it's just as great as a game played with kids. Just see Sag's article that he mentioned for an example. Storage is an issue, but that's really only because the price of the stuff was so damned low. The master sets that people could get for $40 MSRP or as low as $5 clearance would easily be a $100+ kickstarter in today-dollars.

GorillaGrody wrote: I always wanted to try this, but got in too late. Thanks for the report!

Reading your report (and another guys' issue with 40k where 1st turn's initatitive seemed to determine the eventual winner) reminded me of one of the better systems in Heroscape. It's not a full army I GO, you go system. There are these order markers which you place on your army cards at the start of the round. You move 3-5 figures with each order marker, out of your total army size of usually 10-24 figures. Each player has a 1, 2, 3, and X order marker, and they alternate after each one, with the X just being a bluff. It goes My 1, your 1, my 2, etc. And after both players take their three, we reset order markers and re-roll initiative. So it's possible to get two quick turns in a row if the initiative switches. These are important inflection points for melee units in the flow of the game.

The order marker system was very important for preventing a lot of blow-outs and was the first thing I wrote a long strategy article about.

Jackwraith replied the topic: #292907 22 Feb 2019 09:35
Yep. One of the best things about Epic was the intersticed turns. One side would have the initiative with one unit and they could roll to try to act with a second unit, but then the initiative would pass to the opponent (unless you were those sneaky Eldar and, rarely, you could act three times.) That way you could never rely on piling up attacks and/or effects from your side unless you had specifically planned ahead in deployment to enable such a thing. If your unit was in the open, it might end up with too many blast markers to attack effectively, if at all. It restrained the ability to completely blow up one side or the other, leading to that dreaded: "OK. You won the roll to go first, so you win the game. Wanna play again?"
Read More...