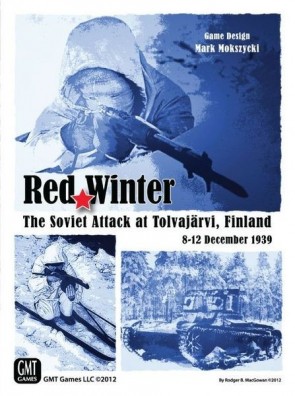 I've played four solo games of Red Winter over the past two days. The game covers the Battle of Tolvajärvi during the Winter War.

I've played four solo games of Red Winter over the past two days. The game covers the Battle of Tolvajärvi during the Winter War. My first two games were just of the tutorial scenario (17.17 Tutorial: First Folly), which is just meant to teach the basic concepts. Both the Soviets and the Finns won one as I figured out how the game worked.

My next play was First Day (17.2) with the Soviets winning 22 - 15. The Finns held out for a while at the hotel by cycling battalions as they fell back to delay the Soviet advance. The Soviets eventually were able to overwhelm the hotel, gravel pit and key bridge through weight of numbers, but the Finns maintained a lock on Tolvajärvi and managed to keep a foothold on Kotisaari Island and deny the Soviets points there. Unfortunately for the Finns, they rolled terribly throughout the game for recovery and so the units in Tolvajärvi were still only 1/3 recovered, which awarded the Soviets six points.

Last daylight turn, where the Soviets have not yet taken the bridge: 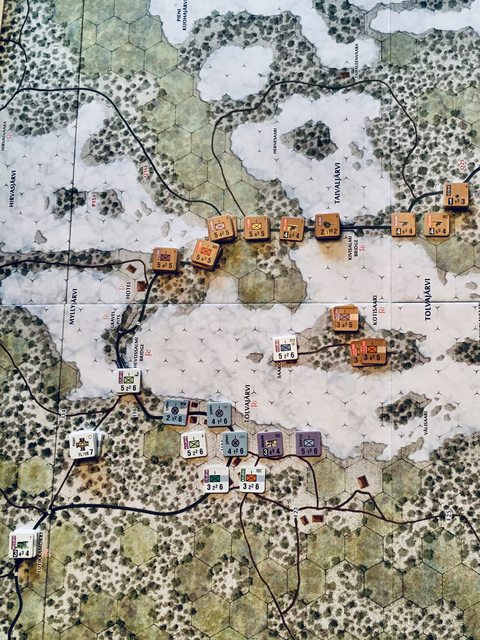 My final play was of The Battle for Hirvasvaara (17.10) with the Finns winning 8-2. They took a lot of damage on the north front as 3/718 fought a pretty good delaying action to hold off ErP9 and eventually eliminate the only company the Soviets could claim as a casualty. They also managed to escape two units off the map to the south before JR16 began to annihilate everything in that direction before finally taking Hirvasvaara on the last Finnish turn with assistance from ErP9. The Soviets attempted a counterattack, but failed miserably leaving the Finns in control of the VP hex. 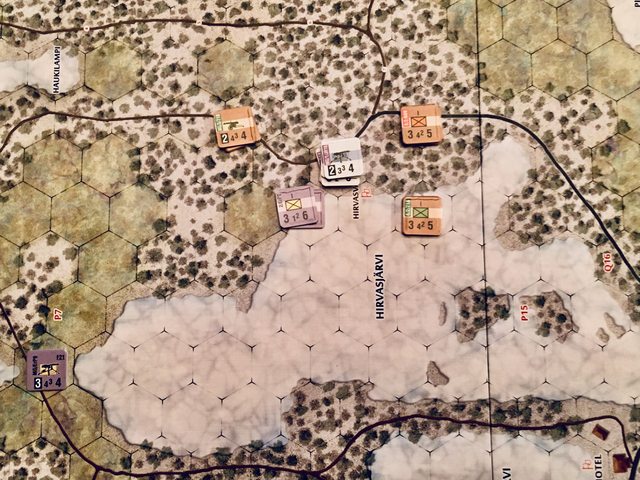 So far I have been enjoying Red Winter. The game is very smooth with some elegant mechanics to handle a lot of the oddness of the fight. I have only played one night turn, so I still have a lot to learn on properly using the Finns major advantages. These were all single day scenarios so I also do not have a feel for how the entire battlefield shifts overtime to represent the major movements and the declining Soviet power. I will probably next try the alternate setup of the Battle of Hirvasvaara (17.11) that shrinks the Soviets down to two battalions, but gives them more points (and the Finns less) for controlling the village. After that, I will probably try some of the simpler scenarios with armor to get a feel for how they work with their combat immunity and extremely limited mobility.

Gary Sax replied the topic: #298447 15 Jun 2019 20:43
This is very cool... and super helpful for wargames since it's such a commitment to get on board with any given game and there are not that many people out there playing and talking about their wargames.

DukeofChutney replied the topic: #298448 15 Jun 2019 21:06
Sounds ace. Are there a lot of scenarios? and do they feel like cut down learning games, or legit in their own right? I'd read future blog posts.

barrowdown replied the topic: #298450 15 Jun 2019 22:01
There are 17 scenarios in the game: two are the full campaign (historical and hypothetical versions), one true tutorial that is not really a game. Of the rest, probably 2-3 are more learning focused by narrowing the units/win conditions to emphasize a given aspect of the rules. The other scenarios focus on a specific time frame or area of the battle.

Overall, I think it’s a pretty good mix of scenarios and I would definitely play the first day scenario again. The Battle of Hirvasvaara scenario has a fairly open setup and a couple of different approaches that make even the small unit count and narrow map have more options than it first appears. The tutorial is not worth another glance once you have the core concepts down (it isn’t included in the scenario book and is on the backside of the Getting Started/Frequently Forgotten Rules card).

Gary Sax wrote: This is very cool... and super helpful for wargames since it's such a commitment to get on board with any given game and there are not that many people out there playing and talking about their wargames.

I’ll try and give a write up to most of the wargames I play going forward. I love playing them, do not really have anyone local that is a big fan of board wargaming, and do not enjoy online play. After going through my treatment, I figured I might as well focus on getting a type of game I really enjoy to the table, even if that means playing them solo (which I don’t really mind).

I‘ll do another Red Winter write up after a complete a couple more scenarios. The last couple of days I’ve been trying the Panzers East Solitaire game (World at War #45) and I’ll write that up after I get it’s sister game Strike & Counterstrike played a few times.
Read More...