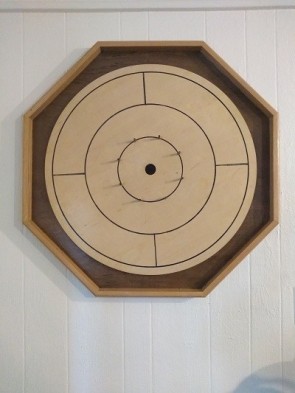 Game Name
Crokinole
Players
2 - 4
There Will Be Games

It's not exactly the first thing on your mind when you move into a new house but at some point you need to get the hulking piece of wood propped up against the bookself a proper place, and if it's a Crokinole board that likely means hung on a wall to see because, well, you damn well want everyone to know you have a Crokinole board.

Background -- my kids' high school shop teacher (it's a STEM school but not one Stemmy has to so much as see a screwdriver in real life during their four years of technical engineering course work) opted to do Crokinole boards as a project.  This was for the non-college prep kids, the kids that are more likely to be putting in your new bathroom in a few years.  He chose a Crokinole board because in his words "it more or less exercises every woodworking skill to some extent or another."  This would be a semester-long project that would produce a game at the end.  Solid win, right?  Well there were boards left behind at the end of the semester in various states of completion, including five or six that were done.  I scored one of those off the kid for $50, full-sized board, plays well.  Perhaps not the most polished board on the market and I mean that literally, but just a whole bunch of fun. 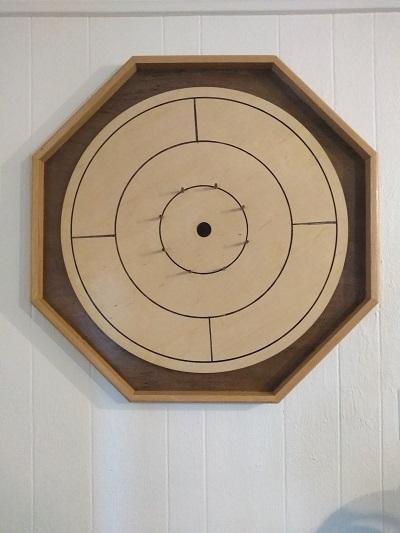 That hole in the center is ebony wood.

So in my case this was a bit more challenging than most, because it's not a professional board. There was no hook countersunk into the bottom of it, and the bottom sheet of wood isn't thick enough to take one.  Putting a normal hangar on the edge of it would result in damage to any table I played it on.  So I needed to lift the entire board with rubber feet so that a hook would have clearance underneath.

Onto Amazon I went, found 1/4 inch tall rubber feet, small, that I could attach to each edge.  These weren't adhesive jobbies, ones with screws through the middle instead that hide in the rubber underneath.  A generous pilot hole at each corner (to one side a bit to avoid the joints of the wood) meant I could drive the screws without fear of splitting out the wood.  These aren't load bearing after all, gravity favors them.

Then one of those saw-tooth hanger things I could attach in the middle of one side.  With a rubber foot close on each side of it it will be very hard to scratch a table.  The board weighs in at 18 pounds so I needed something that had a bit of grab and I needed to make sure that the edge of the board with the hanger wouldn't tear away from the rest of the assembly.  A bit of testing gave me a candidate edge that seemed plenty strong, nailed on both ends to its neighbors and glued with modern adhesive to the floor of the board itself.  I should be good to go. 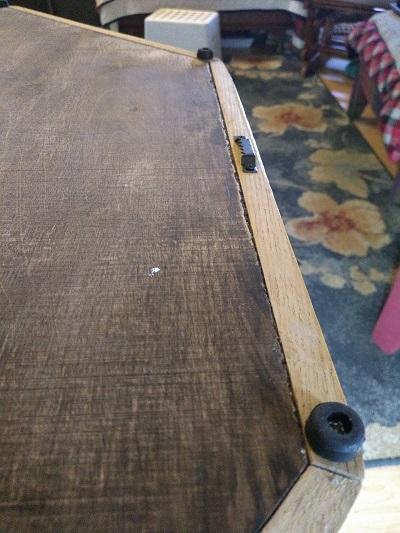 All in place, what remained was a test drive with the new feet lifting the board off the table a bit higher than usual.  Results were good and I won both games, so clearly the changes were properly done.

So now the board hangs above my couch.  Whenever I play I always point to the wood at the bottom of the center hole and reverently say "that's ebony".  That was the only wood the teacher could find in the particular diameter the class needed.  (The rest of the board looks like normal old wood to me.)  Now whenever someone so much as walks into the room I can do the same, being obnoxious as hell simply for the sake of being obnoxious.

Maybe that's doable after all!

jason10mm replied the topic: #320257 09 Mar 2021 07:23
Thats great. Ive never played but every game con I've ever been to has some set up. There are some REALLY fancy ones out there. They would make for a nice coffee table centerpiece or wall art.

Did you ever consider 2 pegs at 4 and 8 o'clock and just rest the board on them? A bit more work on the wall i suppose and not as elegant an end result.

Clearly the STEM solution would have been an electromagnet mounted in the wall with a voice activated switch ('Crokinole ON!" to activate it, for example) that holds a plate mounted on the bottom of the board.

RobertB wrote: $50 is a good price for a well-built one of those. The kid who built it must not have played it.

I get the feeling that after spending an entire semester creating it (with virtually zero skills to start) you look at the board with a very different set of eyes. Every flaw speaks to the crafter in a much sharper voice than it does to the rest of us. He may have been happy to take the $50 and be done with it.

I'm not a guy that worries about the thickness of the cardboard or centering of the cards, so if I game is in playable condition I'm good to go. This board functions as it should, I have fun with the kids playing on it, so I'm happy as a clam to have gotten it for the price.

Sagrilarus wrote: Every flaw speaks to the crafter in a much sharper voice than it does to the rest of us.

Sagrilarus wrote: Every flaw speaks to the crafter in a much sharper voice than it does to the rest of us.

This is why I am so reluctant to make items to sell, despite knowing that no one notices all the flaws that I think I see.

On topic, I really need to get around to making a Crokinole board. I’ve been saying this for years though. The plywood sheet would be enough for two boards. Maybe the first one could be a standard looking board for practice and the second one could be a bit more unique. I’d really like to do a Lichtenberg design in the four quadrants and fill it with resin.

From what I can tell, you'd better like sanding.

Count Orlok replied the topic: #320286 09 Mar 2021 14:20
They aren't too difficult to make. I put together a couple last year. Routing something that large was a pain, getting the lines an even thickness proved a challenge, and my bending setup was a little too small for the task, but they turned out okay.

I can put one together for anyone who wants a custom board as long as you pay for materials and time.

(Edit: I don't know if I'm an idiot or what, but I can't seem to attach anything, but here's a link )

RobertB wrote: $50 is a good price for a well-built one of those. The kid who built it must not have played it.

I get the feeling that after spending an entire semester creating it (with virtually zero skills to start) you look at the board with a very different set of eyes. Every flaw speaks to the crafter in a much sharper voice than it does to the rest of us. He may have been happy to take the $50 and be done with it.

I'm not a guy that worries about the thickness of the cardboard or centering of the cards, so if I game is in playable condition I'm good to go. This board functions as it should, I have fun with the kids playing on it, so I'm happy as a clam to have gotten it for the price.

Reminds me of playtesting games. When it finally comes out, you’re so sick of it, its arrival is somewhat anticlimactic.

ChristopherMD replied the topic: #320292 09 Mar 2021 16:05
Nice article. I gifted myself a Muzzies board for my 40th birthday and now it hangs in the kitchen near the table. Everyone always thinks it's art not a game.
muzzies.ca/product/annapolis-tournament-board-2/

engineer Al replied the topic: #320336 10 Mar 2021 12:10
Fun read SAG, thanks! Personally I have always been afraid to hang my board on the wall. It's just so heavy. If it came crashing down I would be incredibly upset.

I live in an 1800 square foot house with four other people, and I don't have a dedicated gaming space. So my storage and play space need to be tight and neat. It's a limitation I think more gamers would do well to have, forcing them to decide if they're primarily game owners or game players, though perhaps not to the extent that I currently am.

Sagrilarus wrote: Mine hangs over the spot where my wife sits on the couch, a decision which could end 25 years of marriage.

And i hear you on the small (by our standards) house. Did that for a bit, hopefully never again (until blissful retirement perhaps). Never thought i'd hear my wife say, "this house is too small to keep clean!" but with everyone doing everything in the same space it was kinda true.

Sagrilarus replied the topic: #320999 21 Mar 2021 22:17
Played this again with three of my kids today. My daughter dropped one in the hole with a sweet, sweet shot. After she retrieved it she reverently pointed to the wood in the center and inadvertently said “ivory wood” instead of “ebony wood”.