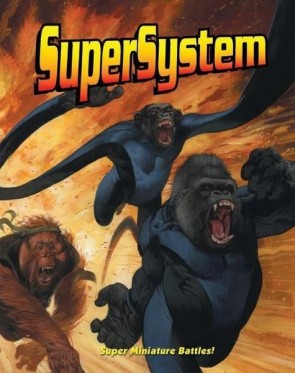 Supersytem is a rule set based on the "goals" system for skirmish level battles in a comic universe. Each player needs a team of 5-10 figures to play and nearly any terrain is appropriate depending on how detailed the players wish to get. The basic mechanic of Supersystem is the d6 success roll. Players roll and appropriate number of d6s depending on their combination of attributes and powers. They count up their total results that are a 4 or higher, and need to beat the number of 4's or higher rolled by their opponent. Characters only have 4 basic stats, or "attributes" as they are called here. Character creation is smooth and easy with a point buy system for all stats and superpowers. Each model has a set number of action points based on their stats to spend on movement, attacks or superpower usage each turn. Turns operate on an initiative system with a fairly strict "I go you go " mechanism, with each player activating one figure at a time.

I recently made the switch over to SuperSystem 2nd edition. There were many reasons to do so:

1.Convenience. Having the cream of the three existing books condensed into one book and arranged very well and logically made things far easier for game time. The new book flows very well, has abundant examples, and has a convenient index.

2. Price and ease of purchase. I used one of the download services and of course had a smooth and easy transaction that took mere minutes to complete. The cost was also very convenient at around 12 dollars US. Considering what I had spent on many other rules systems and books this felt like almost nothing.

3. Rules updates. The games designer is very active on the Supersytem Yahoo! group. Rules questions, developments and campaign ideas are flowing there at all times. Being on the latest edition, considering the ease and cost, is a must since with it comes acess to this excellent community of gamers and very fast responses from the designer himself. It's simply best to be on the same page with everyone there for maximum benefit.

The game itself is quickly becoming the "go to" miniature game in my play group for Superhero adventures.

The rulebook is very well written and concise. One of the best things about the system is that you can use any figures you want in your games. One of my friends is using all of the official figures for his "team" and they are well sculpted, characterful, and priced very well. I have made a few teams from cheap Heroclix models from the 25 cent bin, rebasing them and giving them new paint jobs. (It's quite easy, essentially "paint by number") But the rules and character construction options allow for nearly any figure to be used. Your figures might be from risen Atliantis, an alien planet, another dimension, a time warp or where-ever. The only limit is your sense of comic book abusrdity!!

The power buy rules allow for nearly any superhero to be created. Of course you can't create an unstoppable hero with your points, as game balance is kept quite well in check, but your campaign, or "series" as they are called here can range from low power to high power depending on what you and your group agree on. Overall the power buy rules are very well balanced, but with any system that allows for total customisation there are of course a few narrow loopholes that can be exploited. I am very fortunate that my group has the right idea about building characterful teams and not trying to break the system. Considering the basically infinite number of options presented, the designers have done an excellent job of balancing the powers.

In the place of a character, a team can point buy a group of goons or mercanaries. These act like a character in most ways so the rules allow for a characterful option that barely complicates the game.

The rules come with a series of scenarios that can be played, but anybody that has ever read a comic book or watched some saturday morning cartoons can easily make up new ones. They keyword scenario rules and pointers for scenario creation are excellent.

Where the game really shines is in the long term campaign play wherein teams earn experience points towards new or increased powers. Advancement and injuries from game to game feel right, with a game not punishing the loser nor rewarding the winner by too much.

For those that don't wish to create their own characters (I don't know why not, it's so smooth and easy) there are over 30 pages of sample teams with their powers and point costs listed. They're still an interesting read for creative types as they really establish the feel of the game and serve as great creative inspiration.

The final word is that Supersytem has done a great job of capturing the old time comic feel in a fast fun and exciting system. All you need is the download, a handfull of d6s, and the superhero figures of your choice.

If superheros aren't your thing you're in luck, they also have similar "goals system" source books for many other settings. Check out the company's website for details.

As an example of the flexibility of the character creation rules, here is my first team, "The League of Excessive Villiany"

Their leader "The Shadowlord" has been turned inot a living shadow during an experiment regarding travel into a Black Hole at NASA. Now he has literally been fused with shadow and can no longer interact with the physical world. He can transport himself across the battlefield by stepping into a shadow and stepping out of another shadow somewhere else on the tabletop. He is immune to most physical attacks since he is pure shadow, and has a weak ranged attack of shadow bolts. He strives to overthrow the US government and thwart any further space launches worldwide. The Shadowlord never goes anywhere without his trusted bodyguard:

Animal- Bonded to The Shadowlord due his similar inability to interact with everyday people, this 30 foot tall bruiser is easily struck in battles due to his immense size and clumsiness, but he makes up for it with sheer strength and toughness.

Overload-This unrelaible supervillain recycles energy and damage he takes into powerfull force blasts. Fortunately for the good guys he has little control of his powers and a sea of recurring injuries making him not as dangerous as he would appear. Years of cycling power and absorbing damage through his body have left him ravaged and weak.

Slider-speeding around the battlefield as just a blur to most, this cocky yet clumsy super thief is known for always tripping over that little pebble at the worst possible moment while travelling at mach one through a battle.

Slarvok-Left behind by invading aliens, this mentalist overpowers the minds of everyone near him, telling them he is not there (invisibility power). It's a good thing too since his frail aged body can barely withstand any physical damage. He walks unseen among earthlings using his mind control powers to force others to do his dirty work. In true comic form he yearns for control of the Legaue of Excessive Vilainy and awaits his chance to overthrow The Shadowlord.

The Hit Men--Mercanary group of former hit men that have been upgraded with alien technology by Slarvok. Cybernetic exoskeletons and enhanced weaponry make these once lowly street goons a force to be reckoned with.

This team was built out of random reject Heroclix for a total of about 4 dollars.

My playing partner has gone a completely different way with his all female team "The Sirens". He has a "brick" type female leader, Max. A "speedster" named Blitz. A Sword armed "brawler" named Edge. A flying fire spouting "blaster" Blaze. A physically weak mentalist (name escapes me). And a flying demon who has repented her evil ways (Think Hellboy except a sexy lady with wings). He has used the official models and painted them with matching costumes.

As you can see, the rules allow for great customisation.

My next team , the International Defense Force, comprised of ethnic heros from various nationalities is already in the works:

Capt. Liberty (Cheesy monologuing US super soldier)
Siberian Tigress (Former KGB and cold war romance of Capt. Liberty)
El Toro (Hulk type from mexico or spain who wears a Bull costume, he will have a vicious charge attack and resist injury)
MIC (Made in China) (Hi tech armor suit wearing flying shooter)
Two as yet un-named:
Longbow gadget shooter from england
Transcendant female mentalist from India or africa.
Other countries will be fit in as spots open up due to campaign injuries or whatever.

Note: This is a cut and paste of a review I wrote for BGG that I intend to refer to in future blogs.

drewcula replied the topic: #333179 21 May 2022 08:30
I have been living under a rock apparently.
Or, my head is been stuck in the dessert sand of Osprey's miniature agnostic rule sets.

blatz replied the topic: #333181 21 May 2022 09:44
You should also look into Super Mission Force 2nd Edition by the same author. It's a more streamlined version of the Supersystem rules and it's really great and plays fast.

My friends and I compiled a spreadsheet of pretty much every Marvel and DC character we could think of and were able to stat them out really quickly. Now we just grab a couple of HeroClix and use the stats we per-built and off we go. Looking forward to kit bashing some of them and creating our own heroes

drappstar wrote: Blatz - you willing to share that spreadsheet? Would appreciate it...

I'd love to but it's in Apple's Numbers format instead of Excel. I can try to convert it but it'll probably be an incomprehensible nightmare. It's not just a chart but more of a character card builder with a billion formulas.