Top of the Ops 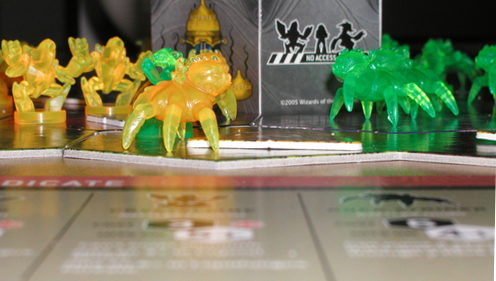 My local gaming club has fallen from the dizzy heights of about eight regular members when we started six months ago to a paltry two. But Rob and I keep slogging on, rain or shine, to get down the pub to play games and drink beer religiously on a Monday night. There are a couple of others who come on rare occasions but everyone else seems to have vanished. They don't even answer emails. Either I'm too abrasive or they were just too much of a Euro loving crowd. I did try to please them. I even agreed to play Race for the Galaxy for fucks' sake.

But for now it's just me and Rob. The two good things about this arrangement are that Rob & I have a fairly similar taste in games, and that he owns hardly any games which means I can inflict whatever I'm feeling like that particular evening on him without feeling guilty about it. Last night I exposed him to Nexus Ops for the first time.

Our first game was unfortunate as a learning experience because I had the majority of the mines on my side of the board, and whilst he struggled valiantly to raise victory points I just swamped him with troops, and managed to keep the Monolith for most of the game. The second was rather more competitive. This time it was me who couldn't get on the Monolith for love nor money - one battle we hard ended up with everyone on both sides dying but he played a Force March card on his turn to re-occupy it. Seeing it was a lost cause I gave up, and focussed on fulfilling those secret objectives instead to the exclusion of all else, even defending my mines. I raced up to 11 points in double quick time, and had four rock striders against a human to take my last point and win the game. And all four dice fluffed! Disaster! That sort of thing would be infuriating in a longer game, but in Nexus Ops it's just funny.

So we finished the night with honour even and one game apiece.  But I came away with a newfound respect for Nexus Ops. Although I've always thought it fun to play, the lack of metagame and the rather repetitive nature of the cards and units lead me to label it as a game with a poor shelf-life. Now I'm not so sure: there's actually quite a bit of subtlety and creativity in the tactics, and there's some hard choices on offer too.  The fact it's short and simple is just the icing on the cake.

Rob wants a copy, but I've no idea where he'll find one in England. Anyone have any ideas?