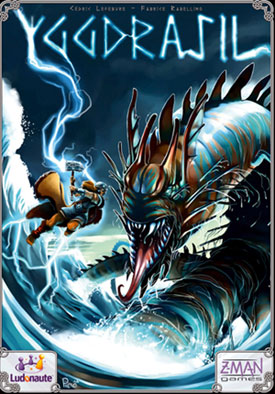 Man, do you know what I'd like to have for dinner? Barnestorming #4.

This week in Cracked LCD I’m taking a look at Z-Man Games’ new Yggdrasil, a co-op “siege management” game that, strangely enough, I find makes for a better solo game than a multiplayer one. I’d almost go so far as to say that if you’re looking to play it alone it’s a recommendation, but with more players that recommendation starts to fade. It’s a neat, tight design but it’s missing some key elements that good co-op games need to stand out from the pack. There’s very little codependency and collusion, and the delegation of tasks is really shallow. But if you play it alone, those things don’t happen and what you’ve got is a pretty good solitaire that does, in fact, play sort of like a States of Siege game.

Speaking of Z-Man, Junta: Viva El Presidente is out now. You want this game. It’s awesome. It’s basically like the designers said “let’s take everything crappy out of Junta and leave the good stuff”. So what you’ve got is all of the fun parts but none of that boring, cheapjack wargame junk that takes forever and doesn’t really add to the game. There’s still dice combat and plenty of bad behavior, and the cardplay mechanics are almost exactly the same. But old Junta didn’t come with dictator glasses either. I’ll never go anywhere the original game again. Seriously.Staying, still, in the Z-Man frame of mind…I finally got to play Wars of the Roses last night. This is one of Bill Abner’s favorite games, and I sort of missed it when it came out. I wish that I hadn’t, because it’s a damn good game. It’s sort of a mix of El Grande, Diplomacy, Game of Thrones, and maybe a little Hammer of the Scots thrown in. Fairly complex, heavy, and with tons of nasty, nasty bribery that will make you want to punch somebody. I may actually just do a full review on it, I think it deserves more attention than it got.

I have Age of Industry in hand, so we’ll see if you guys bickering about it in the thread last time are right or wrong.

I also have the LOTR LCG, I was resistant to buying it due to the idiotic LCG format and the fact that I hate buying a full sized $30 box that contains 200 odd cards and a handful of counters. I think I do want to check it out, it sounds really good. I’ll write it up over the next week or so.

Malloc was in town last night, he came to the Hellfire Club. Played TI3 with Will Kenyon and drank a beer.

My Brink review is up at NoHS. I love it, I don’t care what Metacritic says. Some of the negative reviews almost read like they were made up.

I’ve also got a review of Motorstorm: Apocalypse live at Gameshark. It’s not very good, despite some pretty spectacular destruction.

Like everyone else in the world, I’m playing L.A. Noire. Pictured is an example of gameplay. I don’t like it, and I’ll have a lot more to say about it later. There are definitely some great, great things about it, but the gameplay is ridiculously lacking and I swear that if I have to trail another car or chase some runner again, I’m shutting the game off. Last night I had a massive shootout with all of these gangsters on the set of DW Griffith’s Intolerance. Yeah, it was pretty dumb. A couple of nights ago I assembled some pipes for this lady’s water heater. Look past the razzle dazzle and there’s really not much of a game here.

You know, Tikal on the iPhone really isn’t all that much fun.

I just downloaded Orions 2, the sequel to one of the better CCG-style card battlers on IOS. It’s pretty neat, sort of a cross between Heroes of Might and Magic and a simpler CCG. TONS of depth and replay value, I think it’s a good pick at $2.99

I’m also messing around with Aralon a bit. It’s an attempt at doing an Oblivion-style Western RPG. It’s OK. It’s not really pulling me in like I’d like it to, and it’s already far too linear and MMORPG-influenced to really succeed.

First Touch Soccer, which is on sale for 99 cents, is a better IOS footballer than FIFA 11. It’s smoother, more streamlined, and more fun to play. The AI is ruthless, too. Bumpy Road is on the way over the ether, it looks pretty cute.

I watched Marwencol, the documentary about this poor schlub that gets severely beaten and sort of retreats into a bizarro World War II fantasy world he creates with dolls including some of those big military dolls that you assume that only weird old men buy. Eventually, some of them big city New York types catch wind of what he’s doing so he starts doing gallery shows of his photography. Good on him for turning tragedy around.

It’s definitely a compelling documentary that sort of unfolds certain particulars about the subjects life, leading to some “oh, OK” kinds of moments where what he’s doing starts to make sense. I won’t spoil it, but he’s definitely not quite the person at the end of the documentary you thought he was at the beginning. It’s pretty fascinating to see the level of detail and story that he’s given his private Utopia, where there’s a Pokemon villain-turned magical time-traveling witch named Deja Thoris (wha-?), a club where people come to watch catfights, frequent harassment from the SS, and weird fetish stuff.

My problem with it is that no matter how much I sympathize with this guy, what he’s doing is incredibly creepy and weird. It’d be one thing if he just made all of this stuff up, but he’s got people he knows involved as doll characters including one lady that pretty clearly doesn’t know how to take the fact that this weird guy plays with a doll of her. The film sort of darts around how crazy this all is, instead sort of lionizing what he’s done as some kind of self-administered therapy. I don’t buy it. But it’s a good documentary, definitely worth checking out.

I also watched Lifeforce, the 1985 Tobe Hooper space vampires movie this week. It isn’t very good, but I love some of the ideas in it. I love the beginning, when the crew investigating Halley’s Comet runs into the dead, bat-like creatures and the crystal “coffins” on the ship. There’s a cool, sci-fi Gothicism there that I just adore. The movie sort of falls apart on earth though and not even an early Patrick Stewart role can save it.

It’s one of those “coulda been great’ movies. I totally dig the space vampires concept, and it’s funny to me that Cannon Films (hell yeah) actually changed the name of the movie from Space Vampires (the Colin Wilson novel it’s based on) to Lifeforce to sort of classy it up.

Oh, and Steve Avery- the female vampire is topless for quite literally the entire film. In fact, when I googled "Lifeforce Vampires" the first picture was of Mathilda May, the actress, naked.

I’ve also had Numan and Tubeway Army stations constantly on Pandora and the other day it decided that I might like to hear “Primary” by The Cure. I started to reach for the skip button, thinking “no Pandora, I gave up on listening to The Cure many years ago” but the song sort of caught me off guard. It reminded me of how awesome they were before they spiraled out of control for “Kiss Me Kiss Me Kiss Me” and went full-on arena rock/teenage makeout music for “Disintegration”.

So this sent me back to the good Cure records- “Three Imaginary Boys”, “Seventeen Seconds”, “Pornography”, even “The Head on the Door”. I love the skittery, tense pop-punk of their first singles, their more expansive but still restrained psychedelia, and early dance music excursions no matter how much “The Walk” sounds just like New Order. “Seventeen Seconds” is definitely their best, and listening to it brought back memories of being in a band in high school and playing “A Forest” at parties for like 20 minutes at a time, flangers and chorus pedals practically overheating.

It seems that the more Robert Smith started to look like Elizabeth Taylor, the worse they got. I can’t stomach anything they’ve put out in the past two decades at all. I still remember the crushing defeat felt by my goth friends when “Friday I’m In Love” was a hit single.

Next time- I dunno, maybe the LOTR LCG.

Discuss this article
Log in to comment
Posts in discussion: Barnestorming #4- Yggdrasil in Review plus water heater repair and Elizabeth Taylor