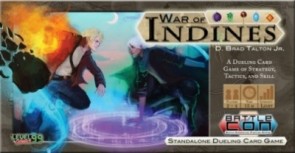 What number are we on?

Yeah, I think I like BattleCon slightly more than Yomi. It’s not as immaculately designed and probably not as deep as Yomi can get, but it’s more fun, narrative, and there’s lots more variety and not just because there’s 18+ characters. There’s some really quite unique concepts with the dual-card play, the discard cycling, and the spacing game- you can’t really corner trap somebody in Yomi, and Yomi doesn’t have stages with electrical barriers or where you can fall off an airship.

The problem is that it's another game that some will play once and dismiss. But you've REALLY got to know the cards and know who you're playing for the greatness to emerge. It is NOT a rock/paper/scissors game. The strategy and tactics are all in knowing the cards and how to play against certain characters while making the most of your styles, effective range, mobility, and abilities.

You know where to go to read it.

I’ve also got a new article up at Worthpoint about how reprints have affected the collector’s end of the hobby.

Trying to get some more Rex in- my buddy Will Kenyon (Mr. TI3) claims that he’s found some kind of massive imbalance for the Lazax player or something. Dunno what he’s talking about, but I’m sure he’s played the game at least once a day since it released.

Syndicate reviewed. Had it been a completely co-op game, it might have been great. But they did that thing where they

stick a shoddy single player game onto a title that would have been at its best as a multiplayer only thing. I did a seperate article at NHS about how the game represents this idiotic concept of AAA shooters having both single and multiplayer components...and doing neither well. It made Penny Arcade's The Cut.

Totally loving the Vita. I haven’t touched a home console game all week, splitting my time between Wipeout 2048, BlazBlue, Rayman: Origins, and FIFA. FIFA is better than the console version. I’m serious. I think it may be the best soccer game I’ve ever played.

Oh, and Hot Shots: World Invitational. My archenemy. I’m terribly addicted to its weird mix of cutesy/creepy characters with their ridiculous outfits and surprisingly realistic links action even though I hate golf. But I’m no damn good at it at all, and I keep dropping double/triple bogeys in the last half of the tournament I’m trying to win so I wind up 10-11 places down on the leaderboard. Great, great game. Just really hard, and it doesn’t help that some of the features and physics are opaque. But seriously, who wears thigh-highs with golf shoes. Oh, the Japanese. That's right.

A little Fairway Solitaire here and there, but that’s it. Still can’t stomach the thought of playing through 30 turns of Ascension two or three times a day. Almost all handheld time is on the Vita right now. Nightfall should be out next month, and it’s Playdek so that will probably get me back in the swing of it.

It’s such an amazing film, and ironically enough I hated it when I first saw it around 1990-1991. At the time, I was all into John Woo and the HK New Wave stuff not to mention cult horror and I knew that Taxi Driver was considered controversial and violent. There was also that sort of loose connection to punk rock and The Clash. I saw it and was totally underwhelmed.

I was clearly a dumb teenager at the time, because it’s a masterpiece. What’s more, the actual on-screen violence isn’t anything compared to the psychological violence that’s going on in it. It’s truly an urban horror movie, and Travis Bickle is very much a combination of traditional monsters. He’s practically a vampire, a werewolf, a ghost, and Frankenstein’s monster. He turns himself into a machine with a drawer guide and a .38. He’s unable to connect with or effectively communicate with other humans that don’t live this kind of nocturnal, fringe existence.

Movies like Taxi Driver are why I do not give a rat's ass about all the nerd-pandering FX shit anymore. You just don't see films made with guts like this anymore, a real sense of human darkness and real-life grit. It's movies like this that made the 1970s the best decade _ever_ in cinema. And we'll likely never see another film as honest or committed like this again. I don’t even remember the last time I heard a great, new grindcore record. Maybe it was Nasum’s “Human 2.0”? I dunno. Anyway, Liberteer’s “Better to Die on Your Feet Than Live on Your Knees” is the best grindcore record I’ve heard in at least a decade. It’s on Relapse, and I don’t think I’ve heard anything on that label since the early 2000s.

It’s very unsual. It’s a one-man-band, the guy used to be in Exhumed and Cretin, apparently. But this isn’t Carcassian gore grind at all, it’s political, anarchist punky grind with….duhn duhn! Marching band stuff, fife and drum, horns, banjos, early American music, major key riffs, and occasional synths. It comes across something like early Napalm Death, Heresy, or Doom but with occasional NWOBHM guitar leads and then…a brass section. But it is totally 100% grindcore in that old Earache/UK style.

Songs are short, sharp, and stick with you. It’s got some serious hooks and great, very topical lyrics. The only problem with it is that listening to it on Spotify sucks. The songs are mixed together and there are recurring themes and figures, but there’s that gap between tracks as they stream. Apparently the CD linear notes contain instructions about how to make a bomb and a knife with the CD and its case, so it's probably worth buying.