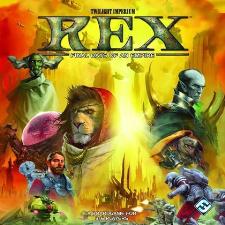 Rex is a Ghola.

It struck me the other day that the Ghola is the perfect metaphor for Rex. A surrogate clone. And they can’t get the eyes- the “windows to the soul”- right, so they stick fake metal eyes in there.

Rex is a great game, but not because it’s Rex or anything that Mr. Petersen or Corey K. have done. They’ve made their small, mostly respectful but completely unnecessary stamps on the design. In ret-conning the whole thing to be about the wholly uninspired and oddly bland TI3 setting, they’ve missed the boat on making Rex as timeless and immortal as Dune. Granted, if you don’t like the Dune setting and never cared about the original, that doesn’t matter. But I doubt playing Rex will inspire you to make your own set 20 years from now.

It’s strangely abstract, which is about the last thing you’d expect. Last week, we had a an influence phase where “advanced technology” appeared in the Pleasure District. WTF is that? Jol-Narr sex toys? Oh, that’s right, it’s nothing but a numerical chit that counts as an economic resource. Not something as specific and thematic as Spice.

It’s also struck me over the course of my time with Rex how much is _missing_ in terms of _theme_. Not setting, but theme. Rex is some hackneyed civil war story that means almost nothing over the course of the game. But Dune carries with it the clashing and meshing themes of religion, politics, ecology, backroom treachery, and imperialism. Rex is about space cats and space turtles fighting over number chits on a map of Arkham.

Who really cares about the culture of the Lazax or the Hacan? They’re blanks. But I know everything about the Atreides, Harkonnen and Guild. And why their powers are what they are. And why most of their leaders have names other than “general” and “ambassador”.

So in the end, although I came out of my first play really excited that they mostly kept Dune intact, I think Frank Branham summed it up best- “why bother”.

Sine Mora. Download it now. And you really, really should play Journey. I reviewed both at No High Scores since Mad Catz only wants “AAA” reviews now.

Yakuza: Dead Souls is Yakuza with zombies. Yep. Not great.

And still picking through Mass Effect 3, I hope to get to the ending before BioWare wimps out and gives in the internet whiners, changing the ending to some big FemShep sex scene. Oh, “fans”…

Not much new to report, but I did download Mother Lode on the iPad. It’s basically Survive! with a space theme. It’s pretty good, but the developer left out a lot of really important stuff- like the ability to speed up AI turns. It’s so. Freaking. Slow. There also aren’t AI levels. With human players, it would fare a lot better. It’s only a buck.

I also picked up Sky Gamblers since it was supposed to be this super-hot next-gen IOS game. It’s actually really good if you like Ace Combat-style games. Controls are kind of jank (of course), but it looks good and has some good action. It’s optimized for the new iPad, which I do not own. Plays fine on the 2 or even on the iPhone 4.

More kids stuff. We watched Toy Story 3 the other day, and although I’m not much of a Buzz/Woody/excessive marketing fan, that was a damn good movie. I was surprised at how dark it got, and how there were some honest emotions depicted in it. Lotso was a _great_ villain, almost redeemed but no, he really is a bad guy and he winds up crucified (!!!) in the end. The scene where all the toys were about to die in a fire was ridiculously intense for a kid’s film. Love that there was a Totoro in it. The part with Mr. Potato Head sticking his parts on a tortilla was really freaking weird. Almost surreal.

So that lead into watching the other two, which I had never really seen. I liked them more than I thought I would, mainly because they had more of a satirical bite than I expected- particularly the second, which was really a big skewering of the collectibles market, action figure collecting, and nerd speculators. It’s funny watching that old animation though- it’s technically crude and outdated, but there’s still some very nice craft and artistry evident.

So now, I can officially say that the only Pixar movies that suck are Finding Nemo, Cars, and Up.

In a music slump this week, nothing interests me. Check back next week.

Sorry for the lack of pictures- just finished recording a podcast with Mr. Tom Chick. I'm a busy  Hollywood type now. I guess.