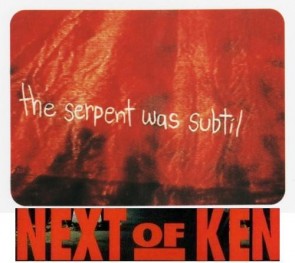 It was a hectic September full of gaming, music, and travelling; I'm hoping to get everyone updated, as a lot of what I wrote in September was written in advance.  So we've got a lot of catching up to do--let's see how much of it I can knock out this week.  Join us, won't you? 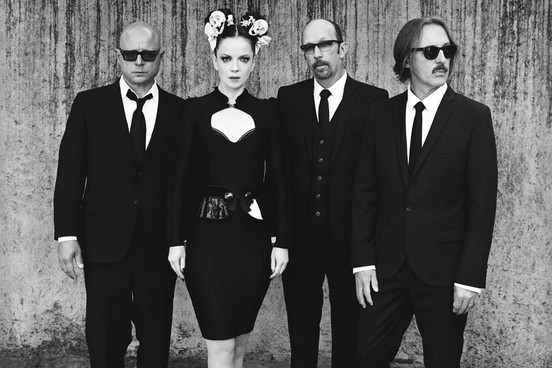 Got to knock off two bands from my "bucket list" to see live, one extremely overdue.  My wife and I went to the Atlanta Midtown Music Festival in September, where I was able to see both Pearl Jam and Garbage play.

Garbage put on a great show, and it was a wonder they did because they had tweeted that their hotel, the "W", had no water when they arrived.  They then had to go perform in the 80+ degree heat.  ("'W' doesn't stand for water, apparently" lead singer Shirley Manson tweeted.)

Didn't matter as they put on a fantastic show, running through a lot of old favorites and several from their new album as well.  They thanked the fans profusely for sticking with them even though it had been seven years since their last album.  To me, it was worth the wait.

We also saw Adam Ant impressively running around stage in full Napoleon gear.  He definitely had some manic energy despite the mid-day sun.

That night was when Pearl Jam took the stage, and by that point the crowd was obscene.  We pushed our way near enough to the front to see, but there was a freaking sea of people there.

They haven't lost a single step, ripping into "Why Go" to get everyone pumped up.  I have a great amount of respect for bands that sound every bit as good live as they do in the studio, and that's Pearl Jam to a tee.  They just killed it, each and every song.

They're one of my favorite bands, but I wonder if they'll start slipping more and more into that Rolling Stones territory--you know, where fans just don't give a shit about your new material.  While the crowd sang in throaty unison for "Jeremy", "Black", "Given to Fly", and others, there was considerably less energy when they launched into something from more recent times.  I have to shamefully admit that I can sing right along with a giant chunk of their catalog, but recent stuff...just not as much.

Not that it isn't great stuff--they keep putting out great albums--but as you build a catalog and a devoted fanbase you reach this inertia that you almost have to drag the fans along with.

Anyway...I'm sure at this point that everyone who has wanted to see Pearl Jam has done so, but if you are like me and just hadn't had the chance, go and see them.  Mike McReady's extended solos alone are worth it...the man can shred.

How Far Can  You Take It, Til You Realize

I went to my first Magic: The Gathering event in forever, mostly because it was free and two of my sons had shown a recent interest in playing Magic. 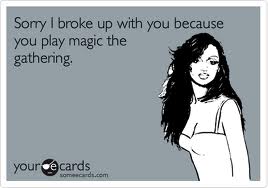 I've gone on the record many times as saying how much I disliked Magic limited/booster play...well folks, I have to eat my words, as that environment has come a loooooong way since those early days.

Don't get me wrong, you'll still be cobbling together a deck full of cards you'd never use in serious constructed play.  Just not happening--overcosted, underpowered.  However, what's really interesting is just how much cards can shine in that Limited style of play, becoming superstars in their own right.

It felt great as I went undefeated in my pod, getting some prize packs for my trouble.  One of my sons won his last game to avoid getting shut out, and he pulled a Nicol Bolas in his prize pack (ultra-rare main bad guy from the current storyline.)

We did have a great time and I know that whenever there's another Magic Celebration, we'll be there.  Just too much fun, and best of all, it was free.  You can't beat that.

Fingers of Despots Turn on the Lights

The same day of the Magic Celebration my brother picked up a copy of the Netrunner Core Set.  I'll be honest in that I wasn't likely going to buy it as I've really soured on Fantasy Flight's LCG models with their weird card distribution engineered solely to get you to buy more core sets--just stupid, stupid, stupid.  But that's been hashed out elsewhere.  There's also my immense dislike for Lord of the Rings LCG, but we won't get into that right now either. 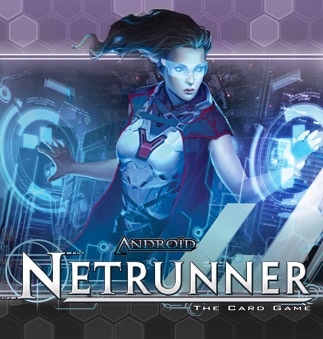 I really liked Netrunner back in the day, and hoped that FFG would be able to just bring us a decent game without mucking it up with their "new and improved" style of game reimaginings.  As these don't always go according to plan, these are generally a mixed blessing.

I was pleasantly surprised though with how well the Core set has played so far.  The ability to mix up Runner and Corp identities really puts it over the top in terms of variety, and they've thankfully muddled very little with the core experience, making only minor changes.

The old gameplay is all there; the runner looking for openings, paranoid about what's behind every card, what's lurking in every Data fort.  The Corp completely paranoid as well, trying to protect everything at once with what seems like pitifully few resources.  It's definitely the same feel to the game with some great new tweaks.

It's not perfect, though, at least from purely playing out of the Core set.  We've found that the Corp's available Ice and especially Agendas are borderline pathetic.  A lot of the Ice won't end runs or are super-expensive to rez.  Plus the decks with their low-point Agendas mean you're playing so many you're often drawing a glut of them with nowhere good to put them.  I just don't remember that being an issue as much, even with starter-only play with the original game.  Maybe time has clouded my memory, who knows.

I'm not saying you can't win with the Corp, but at this point they're not nearly as much fun to play.  The Runner gets to have all the fun at first, we'll see if they tweak this with some better Corp cards and some higher-point Agendas so you're not playing a Corp deck with freaking Agendas spilling out of it every other damned turn.

I will give this the preliminary thumbs up.  It has the usual Core Set issues, as there are cards you'll want more of than they included (thanks, FFG!) and I think the Corp has some evolving to do to reach their old levels of fun gameplay.  But the new and improved art is great, the gameplay is still as smooth as ever, and the retheme to the Android universe actually adds some theme and character to the otherwise generic cyberpunk universe, which is welcome. I think they're on the right track here, and certainly this is a reprint of the "Cosmic Encounter" caliber.  Well done, guys and gals at FFG.

Caught In Their Paralyzing Embrace, Maybe It's Time to Turn Myself In

We've played a few games of the new co-operative deckbuilder Shadowrift, which is as far as I know the first one to be purely co-operative--Rune Age 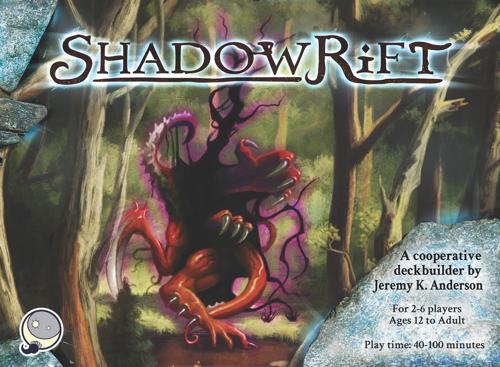 had a co-operative mode, so I guess that's actually the first, but I digress.

We've only gotten a couple of games in, and like most co-operative games it's all about "putting out fires."  In this case though the game manages to feel like a nice combination of Adventurer-leveling and tower defense.  What I mean by the Adventurer-leveling is that there will be a selection of cards out, and with the different types of fires to be handled, you'd do best to decide who's going to be what "class", so to speak.  So you'll need your tank, your healer, your money guy, and each player can set out to build their decks along the way to help them meet that goal.

They'll be dealing with a heavy clock though as one of the evil races in the game will present different threats, demanding you respond to them before they make their way across the 3-spot "board" made of cards that they travel on.  Each enemy has an AI 'script' that they'll follow as they move to each space, ranging from nothing at all to doing harm to the village and its citizens, killing them and leaving corpses behind.

That's the really innovative thing about it, I think, as you're not only building individual decks but managing a Village deck that has a selection of Villagers that can provide you assistance from turn to turn.  There's also a deck of Travellers that you can play resources to get them placed into your Village deck, improving your options.  However, not all of these potential guests are wanted, as some are infiltrators and assassins that will have detrimental effects of the heroes.  Note that these are in addition to dealing with the monsters that keeps spewing from the 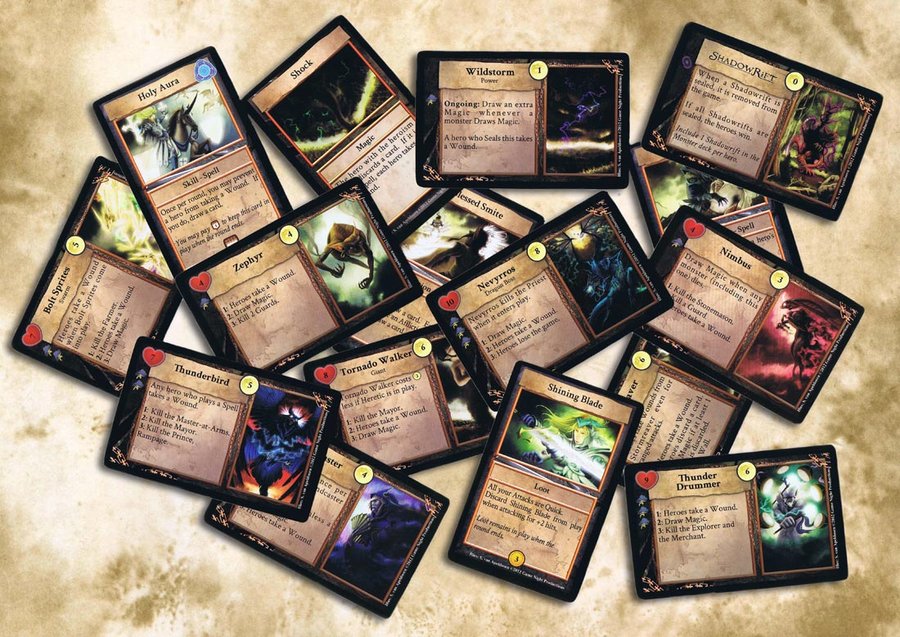 You can lose multiple ways, as is normal for these types of games.  Some monsters have 'instant win' clauses on their cards.  Also if you ever only have face-up Infiltrators and/or corpses in your Village display, the Village has been overrun and the heroes have lost.  What's unusual though is there are two distinct ways for the heroes to win.  One way is sealing the titular Shadowrifts, cards that emerge from the spawn deck and you'll need to seal a certain number of them to win.  You can also win by building every wall in the wall deck, though that's not as easy as it sounds as some of them are crazy expensive to build.

Could there be an alpha problem?  Probably.  Could be taken to a different level even as someone starts dictating not only what people play, but what type of decks they start building.  My tip, as always, is not to play with assholes like that.  That's all I can really offer.

I need to play this a lot more, obviously.  It has the feel of the familiar mixed with some cool new concepts that makes it feel fresh.  It has some spots where it sort of lurches along though--everyone taking their turns at once means that some needed structure is often missing.  It doesn't help that the rulebook is actually kinda bad, so bad in fact that the designer has already been working on a revised rulebook that's more clear (and includes a diagram of set-up, dammit!)

With the different villainous races having a variety of threats to bring at you, coupled with the randomization of the bank every game, should add plenty of replayability.

It's worth checking out.  The usual disclaimer about "if you hate deckbuilders, this won't likely sway you" applies.  It's a step in a new evolutionary direction, but it's not a giant leap, just a pleasant change of pace.

And that's going to do it...man, I still have plenty of games to talk about, so come back next time for another super-potent episode of Next of Ken.  So until the Hulk and Iron Man's bromance comes to fruition, I'll see you again real soon.