Emerging From the Wreckage: Fun Pictures of Burnt Stuff with Real Fire 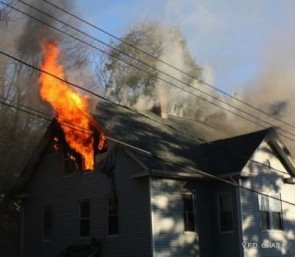 It's been nearly two months since the fire, and I have finally moved beyond shock and hysteria to the point where I can laugh at some of this. The support of all you FATies, both online and face-to-face, has really helped me get to this point. Therefore, I thought I'd share some pictures with you, so maybe you can be amused as well, because as ATers we know that explosions, destruction and wreckage is actually pretty entertaining.

I missed the explosion when the window blew out and flames started shooting out of the house. I was about a 45 minute drive away when it happened. The explosion was loud enough to bring out the neighbors who called 911. 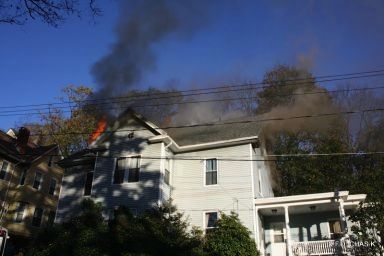 This is a picture of my house's impersonation of a fire breathing dragon. The front door is still there, which means this was taken before a neighbor kicked in the door (actually broke it in half) so the cats could have a means of escape. This amuses me because my front door has a big window in it that could have easily been broken with the largish painted rock which was on the porch at the time. Then my neighbor could have just stuck his hand through and opened the door and spared himself possible injury. 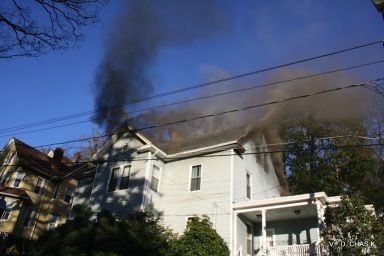 This is the smoke pouring out of the opposite end of the house. It looks pretty cool. Maybe cool isn't the best choice of word, because at the time it was pretty f*ing hot. The fire was so hot that the vinyl siding on this side melted. Afterwards, it was pretty amazing to see how much stuff inside the house melted. Unfortunately I don't have any pictures of that. The windows on this side of the house got knocked out as well. I didn't get inside until after all the windows were boarded up so it was too dark for any of the pictures to turn out. I tried to pry out the copy of Hedgehogs Revenge to save as a Secret Satan gift, but the rubbermaid shelf and all the games on it had fused together into one massive chunk of nasty. 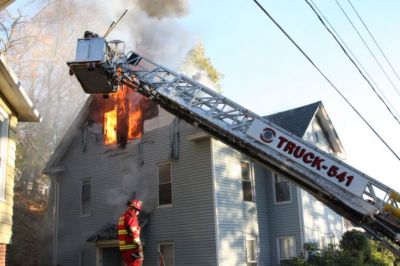 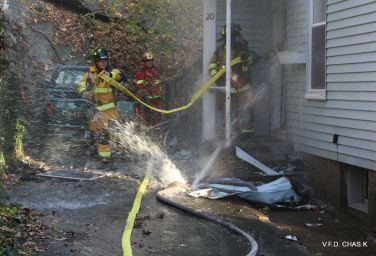 The firefighters had to pump in water from the room below the fire. A lot of water. This picture illustrates how it is possible for there to be two feet of water in your basement after a fire.

All that water also poured down the street. There wasn't much that I could do while they were putting out the fire, except stand in the street and let the water pour over my favorite kitten heeled boots completely trashing them. Once there were no more flames shooting out of the house it got kind of boring standing in the street with cold wet feet in my completely trashed boots, so I called my insurance agent and told him my house was on fire. 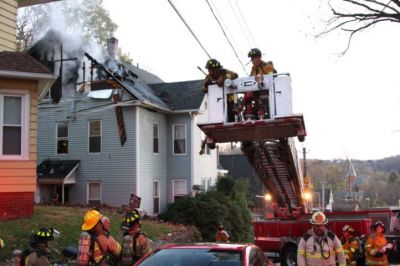 The fire is pretty much out in this picture. As you can see the house is now missing half a wall, and a chunk of roof. 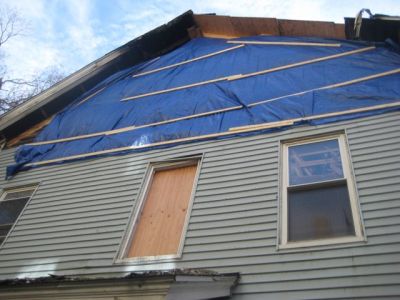 Calling your insurance agent while your house is burning is a good thing. They had dudes out to the house before the fire was even out. After they got the all clear, the dudes boarded up the house, including the busted down front door. Then they gave us 5 minutes to go inside, secure our valuables, and grab items for which we had an immediate need. The most valuable thing I own is my sofa, so I secured that by moving it a few feet so it wasn't under the part of the ceiling that was still dripping water. Then I grabbed my phone charger, because my battery was getting low from talking to all the insurance people, and I had an immediate need to charge my phone. On the way out, since I still had an empty hand, I grabbed the bottle of booze that was on the counter. I figured I had a pretty immediate need to have a drink

Discuss this article
Log in to comment
Posts in discussion: Emerging From the Wreckage: Fun Pictures of Burnt Stuff with Real Fire