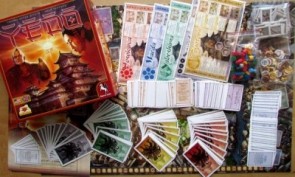 Yedo gets the review treatment, and it’s an odd one because I think the game is really quite good…I just don’t really want to play it all that much. It is very Waterdeepy as some have noted, but in some pretty significant ways it goes further in terms of long-term strategic design, narrative, and theming. That may make a big difference for those of you heathens that didn’t like Waterdeep for those reasons. But it comes at a cost. It’s  a three or four hour game.  I’m not crazy about worker placement games at that duration in general, but there’s no denying that this is a well made, interesting game. Maybe others will get more out of it.

My good friend Bill Abner sent me a copy of Tomorrow, the controversial (well, BGG controversial) game about forced population control. It looks awesome (Heiko) and has a provocative, dystopian theme that no other game has. I played a very early version of it and it looked promising, hope that the final pans out. Oh, mushroom cloud meeples. Believe it.

As I noted in the forums a couple of days ago, every time I start to think “maybe I’ll liquidate Mage Wars” I remember how freaking awesome it is. It’s still a tough game to get the most out of because it’s so dependent on players understanding their cards (and a host of keyword status and abilities) but there’s so much to appreciate here. Arcane Wonders sent over the new expansion, Druid versus Necromancer, and it looks awesome. The Druid has some cool powers, like the ability to grow vines all over the board that extend your casting range. The Necromancer has the expected hordes of zombies and skeletons, but also a neat plague ability. Should be a fun set. I guess instead of selling it off I’m just going to buy the rest of the product line (the 3-4 player markers, the spell tomes and extra spellbooks). Why the hell not.

PS4…yeah, well, whatever. Here’s the thing. It’s a _fantastic_ piece of hardware. The Dualshock 4 may be the best controller ever. When you see “next gen” peeking out of the launch titles (which could have been “last gen” for the most part), you’ll notice and you can definitely see big potential.

Resogun is neat, but it really makes me think of those games Jeff Minter did for the Atari Jaguar like Tempest 2000 (one of the best games ever made). This one is Defender 2013. Free on PS+

Knack is way better than the reviews have suggested. The problem is that the box does not feature an angry mass murderer standing in the shadows and looking down. It’s an old fashioned, colorful mascot platformer like from the early PS2 days or something that might have been on the Dreamcast. It’s also not great. It feels very perfunctory, simplistic, and kind of boring.

Contrast is fucking horrible. Every bad cliché about indie games in one place.

FIFA 14…OMG, Ultimate Team. I never messed with it before, but now I see what the fuss is about. I’ve got a ramshackle little squad put together and I’m already getting that XCOM/Fire Emblem sense of really caring about the players. Of course, they’re all real-world players, none of which I have ever heard of since I’m a casual football fan. I’m in a season right now, just loving it. The only thing is that it’s a CCG model and you’ve got to buy booster packs to get more teams, consumables, kits, managers, etc. so it could get expensive.

At the Earth Temple in Wind Waker, hauling Medhi around. Fun stuff.

We’ve also been playing the crap out of Nintendoland of all things…River is at a point where he can understand and kind of play things like the Mario Chase game (which he LOVES) and Legend of Zelda Battlequest (which is definitely the best of the whole package). He figured out Animal Crossing Sweet Day last night. Scarlett gets kind of frustrated and winds up quitting, but she loves the WiiSports club bowling.

I didn’t get Waterdeep yet. I dunno, $7. Also didn’t get Drive on Moscow. I dunno.

Gosh, Captain America Reborn was pretty disappointing. After 50 great issues that had a very kind of low key superheroics angle (despite giant robots and possession figuring into the story), it sort of skewed into full-tilt goofiness and that was kind of a let-down. It also seemed awfully close to Morrison’s concept of “trapping” Batman in time. It wasn’t awful, but it definitely wasn’t as good as the run leading up to Cap’s “death”.

I think I might read those Immortal Iron Fist books again, I really liked those.

I can’t believe how bad Serenity was- between the complete collapse of the show’s cavalier tone to arbitrary character deaths to a bizarre change in Malcolm’s character, I can’t believe that anyone that likes the show would enjoy this film. I guess it’s a “fan” thing, especially since “fans” love to have things overexplained when they never needed to be, like the Reavers.

So the Reavers are these space cannibals/zombies/rage monsters. Yet they have the wherewithal and skill to crew and fly spaceships. The whole mythic “maybe they were spacers who went too far out to the edge of space” thing was thrown away in favor of a stock “zombies created by a chemical accident” story. The whole thing with them “dressing up” Serenity as a reaver ship was just fucking stupid.

The whole thing felt very bitter, angry, and resentful. Which are not words I would associate with the show. But it didn’t feel like all of that was directed toward the cancellation or anything like that. It was more a sense that the film was a grudging return to something that even the creators likely understood was better left alone.

It also feels like a jumble of barely realized ideas that were likely intended to be in later episodes of the show. Like Mr. Universe. Why do I care about this guy again? Oh, he’s just this random hacker guy that turns up in the story. But then there’s also hard stops of storylines, like Book. Spoiler, dead. And he dies stupidly and without any sense of loss or gravity. In fact, his death scene was just pathetic. And then Wash, WTF. It almost felt like a “well, we never really liked him anyway” kind of thing. Which is true, but still.

Malcolm is just awful, and his character is so terribly written in the film. For some reason, it’s like he’s got an angry bug up his ass and this sudden “we must get River to this planet” thing makes no sense. The whole “round up the crew” thing had no weight to it, the relationships from the show seemed like they made little difference.

The Operative was basically Jubal Early all over again. Oh but wait, he got spaced in the last episode, so I guess they couldn’t just use him again.

A pretty rare thing to say since most films at least get it mostly right on at least a serviceable level, but the hair and makeup is HORRIBLE. Whoever did it did a lousy job. Kaylee looks like she’s 35 years old all of a sudden. Jayne Cobb looks like he spent some time at the spray tan place or something. Is Malcolm wearing eyeliner?

Ugh, I really wish that I had just left it at the show and been done.

Thinking about watching Deep Space Nine but don’t think I want 173 episodes of it. Any suggestions as to what the best seasons/arcs/shows are?

River’s #1 request this week-“Big Creep Bop”. Figure it out.

Listening to lots of Iggy’s “Lust for Life”…gosh, that’s such a great record.