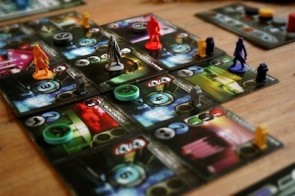 This game kind of got short-shrifted, IMO, by Tom Vasel and the BGG crowd. It’s not a “great” game and like Panic Station, it’s kind of sloppy and all over the place. But you know, that’s kind of why I like it. David Ausloos reminds me a lot of Dario Argento…an often technically brilliant, committed creator of highly stylized work that just does not care if it makes sense or not.

I did not like Rogue Agent at all the first game. My gang actually sent up the signal to sweep it into the box, which is the ultimate signifier that a game has crashed and burned and will not be played again. I played the apologist for it, thinking maybe we did something wrong (the rulebook is better than Panic Station at least) and also wondering if they weren’t playing it aggressively enough. I played again with a couple of friends who had not been poisoned by the maiden outing and they played hard, intercepting bounties and sticking an assassin on one side of you and a bomb on the other. Then we played the android game and had a great time with it.

So I think it is one that you have to let have a chance. There are some things I still don’t like about it. I think some of it is overcomplicated and I really, really do not like games where you roll a pile of dice to see if you see something or not even though you know it is there. But overall, I think it’s a fun game with a “kind of” Blade Runner setting…and a lot of heart.

Helvetia Cup is a pretty good game, it’s a shame it got completely overlooked. It is, despite the Quidditch looking cover, a really pretty straightforward football (soccer) game with five man squads. Of course, those squads are composed of dragons on one side and fools on the other. The rules are actually a darn good simulation of football, with some simple stat rolls.  Shooting on goal is really fun, involving a little bluffing and gambling. It plays quick and offers two modes, a “family” game and a “geek” game. I’ve actually not played the full “geek” game, that adds Legend cards or whatever, but I’ve really liked it. It’s a neat looking production too, fully painted figures and a weirdo Swiss fantasy world. I doubt there will be more teams for it, but apparently there was talk at some point of adding bears and vampires.

Star Realms is really, really good. It’ll probably be the review next week. Spoiler, I think it’s probably the best deckbuilder I’ve played yet.  Don’t dismiss it based on the overall mediocrity of the genre.

I’m kind of surprised that Galactic Strike Force isn’t getting more attention since it is Greater Than Games’ follow-up to Sentinels of the Multiverse. I’ve just sort of poked around with it  and it looks interesting…but man, it is weirdly complicated. I set the whole thing up and was just like “WTF is this”. Come to find out, it’s really kind of similar to Sentinels in that it’s very modular. Everybody gets a ship and a core set of cards. There are three space locations that each have a few stacks of “Space Station” cards- effectively upgrades for your ships. There’s a big boss and an enemy faction deck, they invade the space areas and your team has to go out and fight them. There’s some interesting things going on, like how the station cards flip over and become buffs for the bad guys if you don’t stop them. Looking forward to checking it out more thoroughly.

Gale Force 9 just sent me the FedEx notice that the Firefly expansion is on the way…supposedly very PVP combat oriented.  Which is really kind of not very Firefly, interesting to see how that works out.

OMG, Mario Golf World Tour.  Totally addicted. I do not like golf at all, but I love simple, arcade golf games. Especially when they have tons of prizes and secrets. Of course, it’s Mushroom Kingdom too so it’s delightful and fun to play. I love the silly country club setting, wandering around the castle and there’s all these Mario characters and creatures dispensing protips and talking shop. I just entered the world tournament and finished eight under par, which I thought was pretty good but I doubt will get me anywhere. I did get a sweet Gameboy themed outfit to wear just for participating.

I had to put Hearthstone down for a bit. Way oversaturated on it. Plus, the 3DS has been played more over the past week. I’ll get back to it. I really do wish there were some other decks that people would play than the core three. I almost wish that you could select what kind of player you want to go against, I’d really like to play against, say, a Rogue or Warrior player for a change.

I guess I’m going to try to do Sandman again, I’m all the way up to Season of Mists already so I’ve got a good head of steam. The issue with the boy in the boarding school has got to be one of the best of the entire run and one of the best issues of comics from the 1990s in general. Such a cool ghost story, it almost stands alone outside of the overall Sandman arc.

But man, the art…I really do not like the art most of the time.

I’m going to try to read the whole thing and then the new books, which I’ve read absolutely nothing about and heard nothing about.

Grey Gardens was on TCM a few nights ago. If you haven’t seen it and have any interest in documentary, you are missing one of the best ever made. In fact,  I would say that it could stake a claim to be the BEST documentary ever made. It’s an astonishing film, for many reasons. On the surface, the story is interesting enough- relatives of the Kennedy family living in an disintegrating, raccoon-infested mansion in the Hamptons, spending their twilight years singing songs from the 1930s, eating ice cream on crackers and devising unusual fashion trends like wearing pantyhose outside of pants. It’s very much about the detritus left  behind when money and dreams fail and all that is left are past glories and not-so-thiny veiled bitterness.

But there’s more too it than just witnessing this oddly mundane, day-to-day insanity that these two women live in, watching them bicker and reminisce. It’s a Maysles brothers film, and if you’ve seen any of their work you know that they tend to get at some unusual subtexts. In this film, you almost get a sense that they simply went in and turned the cameras on and let these ladies do their thing. However, there are questions to be asked about how much the women are actually performing for the camera (both were failed entertainers), and what a camera crew’s presence does to alter their behavior. It’s definitely not staged or anything like that, but there is a psychological complexity underpinning what you see in the film.

It’s interesting to watch now too because it REALLY prefigures “reality” entertainment in a very profound way. This is, for better or worse, the original version “Hoarders” or any of those shows that purport to show people “as they really live”, giving the voyeuristic audience a window into someone else’s misery.

Above all, there’s a haunting starkness to the film that I find incredibly  appealing. It’s very unadorned, very unstylized. There are some newsclippings shown at the beginning that give some history and background to the mansion and the women, but that’s really it. When you see pictures on the walls in their house- in elaborate frames on rotten, decaying walls- it really brings home the theme of disintegration and decline.

My favorite metal band of all time is Celtic Frost. Yes, I like them better than Slayer, Metallica, et. Al. Voivod is a close second, but the Swiss take the gold. So I’ve been totally overdosing on Frost over the past week. Good god, they are EXACTLY what I want out of metal and then some. “Morbid Tales” is one of the best metal records ever made and “To Mega Therion” somehow even better. But then there’s “Into the Pandemonium”, which leads off with a cover of “Mexican Radio” of all things and then by the time it’s over, you’ve heard primitive blackened thrash with French horns, a Dean Martin cover and a track that is just a crude hip-hop beat with samples about the moon landing. It’s fucking WEIRD. But that’s how Frost rolls.

Funny thing is, when I first heard Celtic Frost back in the late 80s I didn’t know it was them. It was on a metal radio show that Georgia Tech used to do (“Wreckage”). The song was “Procreation of the Wicked” and I thought the DJ said it was Candlemass. So I bought a Candlemass record (“Epicus Doomicus Metallicus”), which I liked but it didn’t have that song. Some time later, I bought “Morbid Tales” and was like “oh…there it is then”.

I actually have never heard Cold Lake in its entirety; I remember when it came out and the general WTF response to the sudden glam rock conversion. I’ve heard some of the remastered (and not really all that bad) tracks on Parched With Thirst Am I and Dying. And it’s not on Spotify, so *shrug*.

I’ve not really listened much to “Vanity/Nemesis” other than a couple of key tracks (and that terrible cover of “Heroes”), so I’ll be hitting that this week. I’m also going to revist 2006’s “Monotheist”, which was really damn good.

I am so glad I went to see them back in ’06…Tom Warrior came out on stage and said “Are you morbid, Atlanta!” That was so cool. I about lost my mind when they played “Return to the Eve”.

I really love the “studio jam” version of that song- you can hear the drummer, Reed St. Mark, just totally goofing on the lyrics and it sounds like they’re really having FUN playing it. Which is kind of odd in extreme metal in general, that kind of levity and transparency into just being music-playing dudes having a good time.