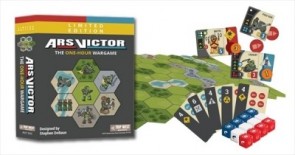 But is it THE one hour wargame?

Hey, let’s have a look at Ars Victor, shall we? This is a really kind of under-the-radar game (despite the banner ad here at F:AT) that doesn’t really seem like much- another one hour tactical wargame- but it turns out that it’s a really fun one. I like it quite a lot, and as far as simple battle games go I think I’ve enjoyed it more than most. The command system is one of the best yet (based on four suits and two colors instead of zones or banners) and the combat emphasizes resilient units and retreating over just wiping out half an army within two turns. And, you don’t have to spend 30 minutes setting it up like a C&C game.

Hats off to designer Stephen DeBaun for his enthusiasm in promoting the game. He’s been doing stuff like sponsoring $500 tournaments and personally autographing every review copy. He supplied review notes including helpful aids to get reviewers get into the game quickly and he communicated when review copies were shipping. This all likely doesn’t sound like a big deal to y’all, but it’s rare to see this kind of personal and professional attention as a reviewer. Usually it’s “Sure, we’ll send a copy. Thanks” and that’s it. Personally signing the review copies is one of the ways that he’s showing how much he cares about the game, and I appreciate it.

Phase II of the ERP is in full swing with classic German games now in steady rotation at the Hellfire Club and with some of more casual gaming partners. Lots of Adel Verpflichtet and Taj Mahal in particular.

Adel is so, so freaking good. I love the pace of that game, it’s so breakneck. The guessing and second-guessing is awesome, and it’s always a thrill to get that double (or triple!) lockup when you pull the detective after someone had a big exhibit.

Taj Mahal is such a great one, too. The design and process are so freaking tight, and picking your fights is so hard since there are so many incentives you’re looking at in each province. Deciding to not participate at all is a tough decision, but sometimes you just have to.

With the kids, Villa Paletti. I found a made in Germany Zoch copy for $11 so I couldn’t possibly pass that up. We’re not playing by the actual rules, which look awfully wonky, and instead I’m just having them roll the die and pull a piece of that color and we all agree on when to put a new floor on. It’s really fun, the kids are really into it.

I got River to play Catan Junior and he picked it right up. I think it’s still a little over Scarlett’s head, but he got the core concept of rolling dice to get stuff, using stuff to build things. And he also totally got right into the trading. Catan Junior is a REALLY good kid’s game- there’s enough there for it to  be interesting but it’s streamlined and focused enough to take 20-30 minutes. And there’s almost always plenty of resources, so there’s not those long stretches like in adult Catan where nobody can build anything. This was another one I picked up on the cheap, I think it was like $12.

I got Shovel Knight but I’ve just played it for about 30 minutes. It looks pretty good so far- definitely in the classic Capcom platformer vein. More on it later, but so far I really like it. It pulls of that difficult trick of being modern but retro without pandering. It feels genuine, not imitative.

Well, I thought that I would try World of Tanks: Blitz. I’m pretty hooked on it even though there are huge swaths of the game that I just do not understand. The slow pace and completely different tactics make it a very unique shooter and in a way it makes me feel like the old “vehicle” genre of video games has made a comeback. It seems like something we would have played the hell out of on the original Playstation in some ways, albeit with a lot more technical detail.

Where the hell should I shoot a tank? I hear “not on sloped sides” but how do I tell? Supposedly the most heavily armored pieces are highlighted, but what if the whole tank is highlighted? Is it worth buying the premium ammo?

I haven’t spent one dollar on it and I likely won’t…but it is a really good game, and it plays great on the phone.

I’ve seen that the new Dawn of the Planet of the Apes movie is getting great reviews and it looks really good- can’t beat apes on horseback…but since I can’t see anything over PG in the theater, I thought I would catch up and see its predecessor, Rise of the Planet of the Apes. Dang, it was really good. I didn’t expect to enjoy it quite so much, particularly after the 12 years of bad taste left in my mouth after that hideous Tim Burton remake.

Caesar was absolutely convincing, what an amazing combination of physical performance and digital artistry. Just as how the original Apes film was a high water mark for makeup effects, so too is this film for digitally enhanced actors. There was such a wide range of subtle emotion on display, and his quiet rage was utterly compelling. I loved his civility; I loved his slow realization of how the human world treats apes and how his human friends were the exception. And man, that scene where he finds his voice…wow. I loved that the film made time for small, quiet moments and the only big action sequence was the battle on the Golden Gate Bridge- brilliant setting for a horde of revolting primates!

The call-outs to the original film were fun and not overdone (although the classic line was a little on the hammy side, and probably should not have been delivered by Draco Malfoy), but I think this film really stands on its own and I’d say it’s the second best Apes film to date, easily. The “origin story” made a lot more sense than the old business about a disease wiping out all the cats and dogs so humans take apes as pets thing.

Of course, now I really want to see the new one…

I keep trying to listen to this new Craig Leon reissue…it is really good, all based on the Dogon people and their crazy history with space aliens…but I keep going back to, you guessed it, Chrome.

But I have also been listening to some Tenpole Tudor after RobertB posted a joke link to “Wunderbar”…I put on “Swords of a Thousand Men” and River and Scarlett both said “It’s the song from Pirates!”,  referencing the Aardman animation pirate picture that they love. It actually has some really good music in it useful for introducing kids to The Clash, The Pogues, The Beat, and so forth.