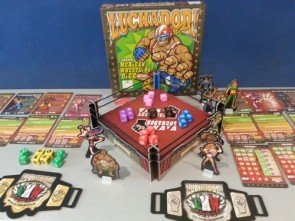 Alright, I liked Luchador more than I let on. It’s really good, definitely a very fun, very well-executed dice game. But you do have to play it with people who get that you have to use bad language and get really invested in winning one of those little belts. I think I may actually like it better than King of Tokyo, which would be something because I usually cite that as my favorite dice game. But this one has just a little more, I think, and it avoids the piles of ability cards that can over-complicate KoT.

I would LOVE to see this game get licensed up with something like the AAA Lucha Libre promotion or even some of the independent ones in the US. I’m sure WWE is out of the question, but if their product department is somehow listening- this would be a GREAT game to slap John Cena or whoever on and put in Target. Even with just the basic rules.

More Super Fantasy, which I absolutely adore…I’m kind of wondering about the point of traps in it…I mean, if you see it there…don’t step on it! I do kind of fear that Temple of Elemental Evil will push it to the side though.

More Doombad too, just solo on it though…it is such a weird game…but I think there’s actually some genius in it, I’m really hooked on this idea it has to thread the needle between specific, positional miniatures play and abstracted “melee or ranged” proximities. I also really like this notion of tooling up to get into the three big approaching fights, I think that’s a cool idea.

My top secret project is about to be revealed, stay tuned.

Bloodborne, practically religiously. It is one of the best games I’ve ever played, and I think it is the best of all of the From Software titles. The refinement on display is remarkable, the design work is quite literally the best in the business. And the production design is up there with Metal Gear and Bayonetta. So many aspects of this game just blow me away.

I’ve also been hitting Link’s Awakening on the DS. It was originally a Game Boy title, later released for the Game Boy Color.  The interesting thing is that it was done by the same team that did A Link to the Past, which is tied for best Zelda game ever with Wind Waker. So it has some of the same qualities, but it also gets a little weird. There’s no time-jumping, dimension-shifting or anything like that…it’s weird in a different way. One way is that is has all of these references to Mario games. You go into this side-scrolling area and there are Goombas. You deliver a photograph to this guy and it’s Princess Peach (signed, “Christine”?!) Then there’s these random houses with phones in them that let you talk to this unseen guy that tells you what to do next.

Overall, it’s really good and it definitely sates that 2D Zelda craving I was having.

Picking up Xenoblade Chronicles on the 3DS tomorrow…it’ll be my third go at starting it, I think I’ll get further into it with a handheld than a console.

I’m telling you, that Star Wars Rebels game is awesome. It is the best action platformer on IOS. It’s definitely influenced by Super Star Wars (although not as punitively difficult) and it’s a blast to play. It is kind of weird that Zeb is just the guy you go to in the hideout to build stuff, he really should have been playable.  Maybe DLC later on, I dunno.

Six episodes into Mushishi…I just absolutely adore it. There’s a sense of naturalism about it that is both pastoral and vaguely menacing. This is a great series to show to people who think that anime is just a bunch of childish jibber-jabber, schoolgirls, and incomprehensible sci-fi. It’s quite sophisticated, intelligent, gentle and lyrical.

I watched Metropolis, the 2002 picture directed by Rintaro, written by Katsuhiro Otomo and based on manga by Osamu Tezuka. Talk about bringing together generations! That makes the film somewhat more interesting than it actually is, to some degree…it’s pretty good, but not great. Tezuka’s character designs are intact, so they have that more cartoony, almost Seegar-ish quality to them, but the scope and scale of the story and backgrounds is way bigger. It’s kinda-sorta based on the classic Lang film, but definitely in a more anime context. There’s some really cool scenes in it and some beautiful animation, but it kind of feels hollow. The jazz score is something only the Japanese would do, but it gives the whole thing a very Gilded Age feel- which is kind of cool.

More Tezuka- showed the kids the first Unico movie, which is still weird as balls. Not as much as the second one, Unico and the Island of Magic, but there’s still some strange things in it. I actually liked it better than I remembered, which is probably in part due to the fact that the DVD is really nicely transferred, unlike the bootleg-ass tapes I had 20 years ago where the whole thing looked like a messy blur. Bonus points for it actually having Japanese language and subs as well as a pretty decent dub that seems like it’s better than the old one I remember. I actually didn’t realize that Sanrio produced them, so that finally explained why Hello Kitty has a cameo in it. Scarlett loved it.

Totally coming up dry lately, not really wanting to listen to anything after my whirlwind love affair with Sparks. Need something new. Thinking about finally breaking down and listening to Faith No More.

bfkiller replied the topic: #200587 09 Apr 2015 15:10
I loved Metropolis when I saw it back in 2002. I bought the DVD but actually haven't watched it since then. I should give that another watch someday and watch the city collapse to Ray Charles.

I need to get Luchador...

logopolys replied the topic: #200594 09 Apr 2015 15:30
Link's Awakening is probably my favorite Zelda title. The gameplay is super good for a handheld (especially from '93), the puzzles are tricky, and the music is awesome.

My favorite parts are probably hunting down the skeleton who stole your treasure in Catfish's Maw, the exposition and music in Face Shrine South, and exploring the non-essential caves in the Tal Tal Mountains.

You better not say that you're releasing a rap album with Pete or some shit like that...

Michael Barnes replied the topic: #200599 09 Apr 2015 17:55
No, I haven't...I understand that it's very Super Metroid-influenced. It'll hit PS Plus at some point, I'll try it then. Besides, I'm still not done with Metroid Fusion, and I've got the two GBA Castlevanias on the pile.

Logopolys, you know, it's funny because when Game Boy and Game Boy Color were current I wasn't really interested. I sort of had a Game Boy (it was actually my nephew's, he left it at my house for reasons unknown and never once asked for it back. I also never reminded him) so I didn't have a lot of exposure to those games. So I've always kind of felt like they were somehow lesser, thinking back to how SNES, Genesis, N64 and even PS1 were contemporary at the time. But now, I see that these were some really good games- full featured, and definitely on par with NES/SNES quality gameplay if not graphics. I remember distinctly dismissing Link's Awakening, assuming that it was a simpler/smaller Zelda game. Nope, it's a full on Zelda title, 100%.

The skeleton business was great.

Michael Barnes wrote: No, I haven't...I understand that it's very Super Metroid-influenced. It'll hit PS Plus at some point, I'll try it then. Besides, I'm still not done with Metroid Fusion, and I've got the two GBA Castlevanias on the pile.

It's much more Metroid than Super Metroid, if that makes sense. It doesn't hold your hand nearly as much as Super. There's a map but it's very basic, there's not a lot of health

Like the Souls games, once you learn how enemies behave you can waltz through most areas, but if you get even a little bit complacent, you'll be back to getting your ass handed to you.

The power ups are uber cool.

Which two GBA Castlevanias? The middle of the three (Harmony of Dissonance?) is awful and should be avoided at all costs.

Blightygamer1 replied the topic: #200609 10 Apr 2015 02:24
Thanks so much for the shout out and review of Luchador! Michael. Really appreciated. Hoping that the Backspindle Boys will be able to raise the profile as there is a huge audience potential.
Read More...