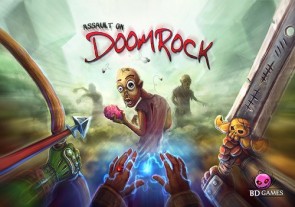 Assault on Doomrock is a good one- a very different sort of co-op adventure game where you have only three big battles. You spend the first half of each round doing adventures and travelling to try to level up and get gear. And then, once time runs out, you have your encounter with a big mob of one kind of monster in a cool tactical skirmish that abstracts proximities and movement in a compelling way. All of the monsters use AI cards to make them play very differently. The goal is to beat the third “boss” encounter, which is really hard to do. If you get there at all.

I like this game a lot, but it does have some issues. It’s way too long, sometimes repetitive, sometimes frustrating. The adventure stage can feel kind of static, since the party moves and acts as one. And it LOVES the Alpha player, especially when it starts to get into “I do this, you do this” mode during the fights.

Review is here at No High Scores.

I’ve been playing Imperial Assault with all of the expansion packs, which are going to be reviewed at the Miniature Market Review Corner. I absolutely hate what FFG has done with these, it’s almost insulting. You are basically completing your base game purchase by buying these to replace counters, just like the “Free” Luke and Vader packs included in the base box. Yeah, you get new campaign missions, but if you’re either already done with the campaign and not looking to start a new one, they’re useless. Those should have been in the base game so you could start your fucking campaign with them.

Yeah, you get new skirmish scenarios, but the design is so rudimentary that you may as well just build a random map and say “the player that has a figure in this room gets 5 VPs per turn” or “The player that gets this marker representing a Gungan Dignitary to the exit wins” or whatever. There is no craft or story development in the scenarios at all, despite some fluff. The one in IG-88’s headquarters or whatever is almost cool because it adds a roaming laser turret. Wow.

And then you get ANOTHER AT-ST to stand in a room that it’s really too big for if you so desire, this time with General Weiss sticking out of the top. You can safely skip that one.

I’ve been enjoying the skirmish somewhat more than I did initially, maybe being more experienced with it makes a difference. But I’d still rather play Epic Duels.

Still playing Rune Age pretty frequently. I’m going to write that up sometime soon. It deserves it. I think it may be my favorite deckbuilder now.

Flipping between Bloodborne and Wario Land 3 is pretty odd. And now I’ve got the new Mario Kart 8 tracks in the mix too. Haven’t really looked at them yet, will play with the kids tonight.

Hearthstone on the phone is a very dangerous thing. Time just vanishes. I’ve been playing through the Naxxramas adventure, really enjoying the challenges and working out how to beat the bosses. Still stinking up multiplayer, but I’m glad to see that it’s not like how it used to be where you had to play somebody using that damn Hunter/hounds deck every other game.

It’s really amazing how this game just completely beats the pants off of Magic in the digital space.

I watched Battle of Five Armies. I’m really happy that all of my favorite scenes from the last 100 pages of The Hobbit were there- like when Saruman and Elrond fight the ghosts, when Thrandruil racks up the orcs on his steed’s giant antlers and cuts their heads off all in a row and when the sandworms show up at Erebor and of course.

I don’t know how to feel about it. Like the others, I wound up watching it a couple of times even though I just really didn’t like it. There’s a couple of really good moments, like when Bard uses his kid to brace the arrow, but most of the movie is just horseshit. Thorin’s “I’m king now, I’m a badass” thing was so stupidly handled…armies lined up, outnumbering them like 50,000:1 and he’s acting like he can win the fight. That’s not Denethor  crazy, that’s just stupid. The battles were just endless slogs, how many times do they have to roll out the cave trolls again, I swear to god. More ninja-elf crap with fake CGI stunts. Characters that no one cares about going about their business no one cares about.

Above it all, all three of those movies have the distinct air of the people involved in making them not really giving a shit about them. They feel sloppy, careless and lazy. As a result, everything feels phony. Even the exteriors look completely fake, the lighting is such that there’s no definition, no sense of depth. You get these massive scenes that look just as bad or even worse than some of the set-bound stuff in the Star Wars prequels.

Ugh. Now I kind of want to watch it again, I don’t really know why. Thing is, if they weren’t The Hobbit, they’d be OK fantasy pictures. But as the film adaptation of The Hobbit…it’s pretty bad.

I almost don’t want to state this in public but I have this weird desire to listen to Fleetwood Mac.

Josh Look replied the topic: #201386 23 Apr 2015 16:33
This isn't so much a response for Michael, more everyone else who would [wrongfully] get a bad impression of Imperial Assault.

The expansion packs are fun. The campaign content might be too late to the party (though there is that new campaign box coming out), but I'm actually glad they didn't put this stuff in the core game to save a bit on an already expensive price. This way I can pick and choose what I want to buy, as I'm only interested in characters from the movies and the select few from the EU that I care about (there aren't any yet, but I can dream). If you're a campaign player, you'll likely want to skip these, but picking a few up might change your mind on the skirmish game (which I was warming more and more up to before the expansions dropped), as what little they add does go a long way.

Okay, back to Barnes.

Michael Barnes replied the topic: #201390 23 Apr 2015 18:39
I'll get more into it when I actually write them up, but I do agree with you Josh about them improving the skirmish game- mainly because the command cards add a little more dimension to it and they are actually new content. I would much rather they just boxed these up all together and sold them as a $40 "extension" than in these silly individual packs with a figure and barely a handful of cards.

Imperial Assault is probably the most I've ever played a game I don't like that much, which is kind of weird. I can't say that I've warmed up to it, but I don't hate playing it and when my friends want me to bring it over I don't really mind. But I'm not excited about another session either.

We've been skirmishing more than campaigning lately, and that's really kind of fine with me. It is still kind of irritating that squad builds are fairly limited at this stage and I find myself thinking about buying some more of the "common squad" figures to give at least a little more variety. Probably won't, probably will just wait until the full expansion and add-ons there.

Would really love it if they would release a co-op expansion with an AI and also a special add-on pack that makes the game more like Star Wars.

Just because Al is lighting cigars with $100 bills, while Buonocore gives him a hand job, is no reason for them to go into business with him. Al is an aging hippie whose demented ideas will not help a SW franchise at all. I hope this idea is dropped and fast.