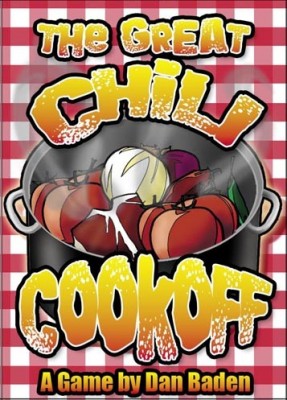 Today's random.org spin of the wheel led me to a cute little game that I've actually played within the past week--Dan Baden's spicy little number, The Great Chili Cookoff.  What was that I used to say?  "Join us, won't you?"

The first time I remember being exposed to The Great Chili Cookoff was at Atlanta Gamesfest in January, 2009.  That was the same year that I, Michael Barnes, Steve Avery, Robert Martin, my brother, and a couple of other fellas managed to be so loud and boisterous we ended up clearing out one of the side Euro rooms.  Barnes mentioned to me what a cool little game it was, so I figured, "what the hell" and picked up a copy for $10 that Dan was peddling.

I have a soft spot for little card games, but they are notoriously difficult to get right.  They can be so light as to be trifling.  They can end up running three years and two months, as Munchkin seems to do.  They can be slapdash mechanical affairs that lack an ounce of theme, mostly manipulating numbers (I think I am one of the few gamers on earth who doesn't care anything about For Sale! and actually thinks it's kinda bad.)

Nonetheless, light card games remain the easiest things in my collection to get played, so I'm always on the lookout for them.  For one, most folks are used to the idea of playing cards.  They grew up with their family, playing Uno, or Bridge, or Rummy, something similar.  Where some folks would stare in wide-eyed wonder if you plopped down a board filled with plastic minis, if you shuffle up and deal out the cards, most people are going to be immediately comfortable with that.  Then there's the ease of set-up, of course.  Crack open the box, shuffle, deal, let's get moving.

The theme of The Great Chili Cookoff is actually appropriate.  Every player has a hand of cards picturing ingredients and two numeric values, one for strength, one for points.  What are you doing with these ingredients?  Why, making chili, of course.  Every player is also dealt two recipe cards featuring ingredients.  Some ingredients are very common, so there will be lots of tomatoes, meat, and onions to go around.  Others are more exotic and rare, such as chocolate, mustard, and honey.

During a hand, each player in turn plays a card featuring an ingredient.  The card a player slaps out there will have a strength value that determines who gets to pick from what's been played, in what order.  So you may really need something, but get outplayed by some jackass playing a big '7' Tomato, and watch as your precious Peanut Butter you needed gets snatched up by someone else.  At the end of the hand after all cards are played, you pick a recipe and can only score cards you took that were on that recipe.  If you get a 'perfect' recipe--all 7 cards match--then you get a six point bonus.  Three rounds of this, tally up all points, determine the winner.

See, that's the brilliant thing here.  I've made a vow to myself to move away from long descriptions of rules and gameplay, but this one's so nice and compact a design, I just told you all you needed to know about how it plays.

And here's the best part about this fun little game.  I have played it now with several groups over the past six+ years, and it's always a hit.  The theme fits and is easily understandable for people.  The trick-taking element is similar enough to classics like Rook.  I think maybe you'll spend five minutes setting up and discussing rules, if even that.  But simplicity and ease of introduction are not the game's only hallmarks.  Making your recipe work feels damned satisfying when it all comes together.  You'll sweat nervously as you try to figure out how to protect that Mustard card in your hand so you can score it for your recipe.  You'll curse like a deranged sailor when the final trick falls and you miss out on your perfect recipe because Dave tanked his earlier and took your rare ingredient just to spite you.  And it's the perfect length for a game like this--a 3-hand game can be done in 30 minutes or less, unless someone is really dragging their feet (hint: don't play games with those people.)

My girls asked for us to play this last week, and though it had been a few months since it had seen the table, it was just as fun as it always was.  I lost horribly as I usually do, I think it's because I'm a sucker for going for the more expensive recipe, chock with rare items, and then fail miserably as my chili is made up of all tomatoes and meat.  Hey, that doesn't sound too bad, actually.

This is one of those games that I think is genuinely overlooked and a perfect game to play with the family.  It plays 2-7, a range that is generally unheard of, though I do think it's much better with 5-7 than less than that.  You should still be able to score a copy of this for ten bucks.  If you're like me and do a lot of family gaming, this may be an evergreen title for you and yours the way it is for us.