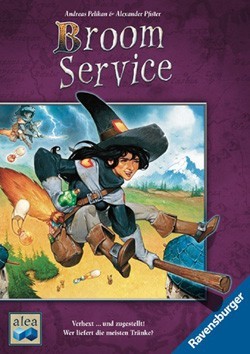 Room on the Broom!

After an 11th hour summer vacation last week, this week's review is up at The Review Corner. It's this year's SDJ Kennerspiel award winner Broom Service, based on the earlier Witches' Brew design by the same designers. I absolutely love this game. It's colorful, fun and it somehow manages to come across like a classic, German-style family game while offering a heavier game than you might expect...yet with simple rules and a KILLER core mechanic that drives everything. You lock down four actions per round, and when your turn comes up you flip one of the cards over and state whether you are taking the Brave action or the Cowardly one. The Cowardly one goes off right away and you do whatever it says. But if you decide to be Brave in order to get the benefits of an enhanced action, then the next player reveals whether or not they have selected the same action and if they have, they pre-empt yours. That's right, you lose your action. Then THEY get to choose Brave or Cowardly and go through the same gauntlet with each remaining player. This is awesome stuff, and it's driving a pick-up-and-deliver game that doesn't feel like any of the usual archetypes of that genre.

Plus it has a cute witch setting, which I am a sucker for. Fans of The Worst Witch/Kiki's Delivery Service/Harry Potter will dig it. I actually gave the game 4 1/2 stars, not sure why the graphic chopped off half of one.

I have an advance copy of WWE Superstar Showdown. Now, I can't tell you the difference between Big E and Big Show (who are both in the game). It's really good, as you'd probably expect by now from GF9. More on it later.

If you haven't noticed in the forums, I've been super excited about Argent: The Consortium. I think it's one of this year's superlative titles, to be sure, even though I guess it came out last year. This is the grand, complex worker placement game with an actual setting and direct player competition you have been waiting for. I'm three plays deep into it, and I'm about *this* close to calling it the best worker placement game I've ever played. Layered, multidimensional and rich with possibilities...it's too bad the title is terrible. I don't know why they didn't go with Argent University. But hey, it doesn't matter when the game is so good.

Other games on the table lately...I got both Relic expansions and I looked over them last night, soloing a couple of turns to see the new stuff. So far, so good. Interestingly, they didn't really go the Talisman route on these, just adding tons of cards. Nemesis adds just three cards to each of the threat decks. Instead, the expansions actually add on to the gameplay. Nemesis opens up not only PVP, but also some cool ways to drive it. One is that you can take on Apostate gear, which means that Devotees (those without any Apostate gear) can track you down and force you into skill challenges. The other is the Enemies of the Imperium game mode where you have actual bad guys (?) controlled by the players that draw from a different type of threat deck, have a different win condition, and can kill you. One of them is a Genestealer Broodlord, which is kind of fun. Halls of Terra adds Earth and Mars on an expansion board along with these political affiliation tokens, which moves the game somewhat further away from Talisman, although they are obviously an extension of alignments. One of the new characters is a Terminator, which is pretty cool. So yeah, looking forward to trying these out soon. I think I really like Relic, almost the point where I would prefer to play it over Talisman if only because Talisman is one of the more played games in my collection over the past...I dunno, 20 years or so.

I have Strange Remnants, the new Eldritch Horror expansion, but I've not even looked at it yet. It, on the other hand, does look like a more cards expansion.

Applejack replied the topic: #208498 14 Aug 2015 03:36
I am delighted "Relic" has gotten better and meaningfully more interesting. It would have been all too easy to include a new faction to shuffle into the existing threat decks--'go fight the Tau who have suddenly shown up in this sector for some reason!'--but FFG has done a lot in two expansions to vary up the game, including making it straight up adversarial, which is just awesome. The "Warhammer 40,000" setting is just icing on the cake for me.

I am unsurprised the "Eldritch Horror" expansion is just more of the same. I played it once and decided I'd rather play "Pandemic", or even better, not play another samey cooperative.

derekjinx replied the topic: #208503 14 Aug 2015 09:15
Having a chance to try this at GenCon, and chatting with some of the team at GF9 at their booth, there are plenty of expansions on the way including a set of golden age wrestlers not too far down the pipeline.

I think it could be a classic filler game provided there's a good stable of wrestlers to choose from.

Another fantastic design by Aaron Dill (whom I had the pleasure of playing Homeland with in the gaming hall), and the GF9 team!

How do you not know who the Big Show is? He's the Giant from WCW (not Andre). Didn't you watch WCW during the 90's like everyone else?

Also, Argent is not better than Sons of Anarchy. More heads down, less social, and extremely long with 4+ players. Also tons of shit going on where only a portion of it actually matters because of those hidden goals. Not sure I like the hidden goal thing. It's interesting but it feels like work having to waste actions to look at them when I'd rather be building up my spells or resource pool.

SuperflyPete replied the topic: #208510 14 Aug 2015 10:28
I liked WWE. Played it with Hotseatgames at my birthday party. Or, rather, the morning after. Fun, but dumb. Not a huge fan of pro wrasslin' but whatever. It could work if it was a Thunder Road clone too.

With regard to Eldritch, I love that fucking game. I have all the expansions except this most recent one. More of the same is a good thing for EH in my humble opinion. It's far more storytelling than Pandemic (eyeing Applejack evilly) and it's very tense, especially midgame to the end when the shit is hitting the fan. Can't see me stopping my enjoyment of this anytime soon. This new expansion isn't supposed to be more of the same, but actually a little different in scope than the usual "new red fez guys to talk to" type stuff. It has some new mechanics, apparently. I'll wait to hear from you on this, Mike.

Now, are you writing for NHS anymore, or have you made the full transition to MMRC at this point, Mike?

hotseatgames replied the topic: #208516 14 Aug 2015 11:00
WWE Superstar Showdown pleases me more with every play. It would be fun to have some of the old classic dudes, for sure. I suppose Hulk Hogan will never happen at this point.

airmarkus replied the topic: #208532 14 Aug 2015 13:00
I think I'm going to bite on Argent. I've had it on my Amazon wishlist for a while now and I've got a $30 gift card on its way from the surveys I do when I'm bored. Barnes, do you think the expansion is worth picking up? There were only a few left the last time I checked.

I'm going to have to try the WWE game. I've got a friend who is really into wrestling and I think he'd really be into this game, especially considering he is still actively seeking out Raw Deal decks.

Relic seemed really good to me in comparison to Talisman based on my one play. Talisman just doesn't do it for me anymore and when Relic hit the table, I thought I was going to be bored and not enjoy it. I was pleasantly surprised and liked it a lot. The leveling was so much easier to track and I really dug the theme too. We were playing with a house rule as well, where you roll two D6 for movement and choose one of the dice. I don't think I'll ever play without that rule again.

OldHippy replied the topic: #208580 14 Aug 2015 20:03
Argent sound like too much for me right now. I like the idea but no one I game with (except the good Doc maybe) will want to invest that kind of energy into one system.

I do love that you say you're "*this* close to" calling it the greatest worker placement game of all time. I like that you do that every once in awhile. I remember when Arctic Scavengers came out and you immediately called it better than Dominion or the best deck builder of all time. Same with Nightfall... now they're dead.

Most people would say this as a criticism but it's not... what it says to me is that your passion is alive and well and it shows in your posts and articles. Still, I'm not biting on Argent even though it does sound interesting.

The*Mad*Gamer replied the topic: #208814 19 Aug 2015 10:14
I got Broom Service in last night! Does the 2 player game work well? The bewitched cards are interesting, wondering how well this mechanism works
Read More...