Barnes on Games - Conan in Review 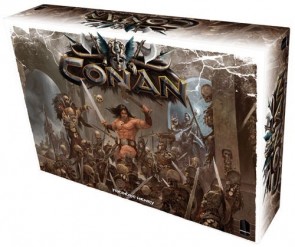 Game Name
Conan
Publisher
CMON
There Will Be Games

Oh, Conan. I guess "what is best in life" doesn't include a coherent rulebook or a complete package of content that does not require you to have a) been a Kickstarter backer b) buy additional stuff and c) figure out how to use all of the additional stuff on your own because there are not really any scenarios or guidelines as to what to do with it. To put it bluntly, this is a $120 retail game that practically slaps you in the face when you open the box with its sense of incompleteness, its sense of rushed production, and an aura of shoddy development.

Which sucks, because it's pretty awesome when it works. Take one look at that map board that has the two ships and any Conan fan is going to get excited at the thought of swinging between the boats into a swashbuckling fray. There are very smart, very cool overlording mechanics. There's a sense that there is A LOT this system could do, like on an Earth Reborn level. The scenarios feel like the climax of a great Robert E. Howard story and the whole thing has the right tone (apart from that questionable illustration on the rulebook).

I like the game a lot, but I feel like it is outclassed by TMNT and Doom, especially the latter because it feels like you never have to buy an expansion. Like Charlie said in our triple header review along with Drew here at Miniature Market, you don't have to wait for it to meet it's potential because it's all there in the box. With Conan, it feels like it needs a second edition and a major expansion before you even play the first scenario.

Where I think they went wrong with all of this is in trying to make a miniatures skirmish game palatable to board gamers. This thing needed a points system and a standard miniatures game marketing plan.

I'm rating it 3 1/2 but when it's good, I'd almost go another full star. But then you have a wonky scenario where the balance is suddenly out of whack or something doesn't work right. Or you are looking at some of the skills and wondering why there is nothing that uses them or says how to use them in the box. Or you see the skeletons on the cover, only to find that there are none in the box.

charlest replied the topic: #243128 27 Jan 2017 08:41
They are re-releasing the overlord book soon. The French version is already out and it looks like they are adjusting scenarios (for balance).

Frohike replied the topic: #243392 02 Feb 2017 01:30
I'm still annoyed that I have this huge box of crap that I can't use and now need to wait for PDFs to trickle out and get translated (probably poorly) before I can integrate any of it into balanced scenarios. They really kinda screwed up the deployment of this game. I'm certainly not writing the game off, but I think Monolith took a design idea that could have been realized in a much more complete way if they had resisted Kickstarter fulfillment anxiety and shipping cost aversion. Wait until the game is *done*, then ship: an idea so crazy it just might have worked. Splitting up the material release from the game design release was a painfully avoidable mistake.

Meanwhile, for $85, I've got a 90+ scenario campaign waiting elsewhere... without price-inflating miniatures for once.

Michael Barnes replied the topic: #243400 02 Feb 2017 08:29
Yeah, it is super frustrating...the other day a friend of mine and I played the scenario with just Conan interrogating the priests in the inn twice. It's REALLY cool. Conan has a curse and you l have to find the right priest to break it...but thy can do things like die while being interrogated and the overlord doesn't tell Conan if the curse was lifted or not. There are also guards roaming around and more like in, turning into a balcony-jumping, wall-smashing brawl. And then Thrak, an ape-man busts in!

It's unlike anything else in the Guys on a Grid genre, not a dungeon crawl by proxy at all. It feels more miniatures-y in a way, but with a stronger than usual and more specific than usual narrative line.

But it kind of doesn't work. I don't know if Conan can win it unless a)the Overlord puts the right priest close to Conan in setup and b) Conan goes to him first. Once the guards show up and swarm Conan it's over. He's going to get exhausted and unable to move due to hinderance.

Lots of oversights like that, and all the scenarios have that kind of feeling.

I love and hate the game.

charlest replied the topic: #243401 02 Feb 2017 08:38
That's an amazing scenario. Played it twice and Conan did win one time. Sort of kited the guards trying to split them up and chose his battles very wisely. I don't think you an realistically hit all of the priests but in that one, the Conan player hit most of them.

By the way, a PDF senario utilizing those add-on Crossbowmen you have Barnes has been released in French, coming in English next week.

hotseatgames replied the topic: #243402 02 Feb 2017 08:43
I echo all of these frustrations. I resent that I threw down money for a game that has so much awesome potential, most of which is not yet realized. So I'm dumping it and will end up with a nice chunk of money left over, even after buying Doom, which by all accounts is a wonderfully complete game.

I realize this could easily be me being impatient, and perhaps I'll regret my decision some day. But I'll cross that bridge if I come to it.

cybergarp replied the topic: #274803 06 Jun 2018 10:03
I really like this game. The frustrating thing is availability of all the expansions and scenarios. Monolith seems to have turned it's interests elsewhere.

charlest replied the topic: #274807 06 Jun 2018 10:26
I agree Garp, this has remained one of my favorite dudes on a grid games. I think you only really need the core set and a big box expansion or two (Nordheim is my favorite).
Read More...