Blades in the Dark - A Minor Complication, Pt. 3 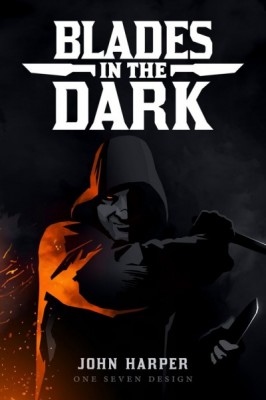 Why our dumb, beautiful stories matter.

This is the final entry of a three-part series exploring Blades in the Dark, cooperative storytelling, and the nature of failure. You can read the first part here and the second part here.

Failure clings to us in a way that success never can, the way the smell of smoke on our clothes is unshakeable and overwhelming long after the campfire has sputtered and died. I blame it on our biology. Our bodies and minds have evolved to relentlessly probe our environment for danger, looking beyond the infinite beautiful and wonderful things out there to locate the one threat that might bring us down. This way of looking at the world makes practical sense when it comes to survival but doesn’t do you any favors when it’s two in the morning and you’re still awake, thinking about all the mistakes you made that day, wishing desperately that you could have done everything differently.

Failure also brings us together, whether through the cruel sweetness we feel when we see someone fail (see: thirty-one seasons of America’s Funniest Home Videos) or in the gentle intimacy that can be felt when we shoulder our burdens together (see: nine seasons of the Great British Bake Off). Roleplaying games thrive on both of these feelings—the hilarious schadenfreude of the botched die roll, the collective groan at a baddie’s critical hit.

As I wrote earlier, it’s these moments of calamity or ineptitude or pure bad luck that can wedge a story in the mind. For whatever reason, born out of nature or nurture, our collective understanding of narrative requires failure to function at all. A comedy requires a failure to overcome; a tragedy requires failure to multiply until it consumes everything around it.

I’ve been playing roleplaying games on-and-off for most of my life—they’ve been with me longer than my wife, longer than most of my friendships, and longer than just about anything else I care deeply about. But it’s only recently I’ve started to ask why this hobby has stuck with me for such a long time. Why this compulsion to pretend, to tell stories outside of my own? And what does this parallel life have to tell us about the failures, disappointments, and setbacks the real world flings at us?

My Blades in the Dark group ran for three months, meeting every other week for a regular dose of stabbings, thievery, and general no-good shenanigans with a group of rogues who were charming, if also troublingly amoral. I mean the characters, not the people (mostly!). These were friends I met in the orbit of my graduate school program, a delightful group of weirdos who had relocated to the Pioneer Valley of Western Massachusetts for some vaguely educational reason and had decided to keep kickin’ around after graduation.

We were all writers of one sort or another. Between us, we had published something like four poetry books, one fiction book, a decent stack of chapbooks, and a whole truckload of stories and poems in various journals and magazines. I’m not saying this to brag or suggest we were special in some way; rather, I just mean to say that “writer” is the word most of us would have used to describe ourselves and our ambition, something to mark our place in the world.

It’s fun playing roleplaying games with writers, especially games like Blades in the Dark that excel at creating moments where people’s personal creative visions can shine. While there was the occasional bit of push-and-pull tension that can happen when a bunch of people accustomed to total creative control try to collaborate on something, for the most part it was pure joy being able to watch people smarter and funnier and cleverer than me think up something brilliant on the spot.

As with any group that shares a profession or a passion, we also used these sessions to kvetch about our work: failed residency applications, problems with publishers, and of course an endless string of rejections. From my experience, being a writer largely consists of being told “no” in astoundingly diverse ways: via email, phone call, letter, social media notification, telegraph, skywriting, and sometimes, if you’re lucky, in person. I’m not complaining—it’s part and parcel of the gig. But it adds up, and even the most well-adjusted person will start to feel the constant weight of all this no. You do your best to make something amazing, and the universe insists on answering back with a sort of professionally cheery indifference.

It was about the time that this gaming group started that I began to sink into a depression that would last for the better part of a year. I was thirty-four at the time and obsessed with my own failures. Here I was, starting to edge closer and closer to middle age, toting a few financially useless degrees and staying afloat with a series of go-nowhere adjunct teaching jobs that paid peanuts and could disappear at any moment. I couldn’t help comparing myself with the folks I grew up with that had houses, retirement plans, and established careers. I had spent my twenties bumming around in bands and my early thirties trying to make it as a poet, and both seemed like colossally idiotic undertakings in retrospect.

Really, though, I don’t think I’ve got it particularly bad. I’m lucky enough to have a good support system and the sorts of privileges that mean I rarely have to experience true fear. I’m not bringing this up to suggest that I’m somehow special in my despair—I’m bringing this up because it’s so, so common. It seems like pretty much all my peers, especially folks pursuing creative careers, are in a near-constant state of struggle and panic. We scramble from one hustle to the next, trying to piece together a future in a world that feels coldly indifferent at best and downright hostile at worst. Whenever our Blades group got together we never failed to have a blast, but I always felt a tinge of desperation bubbling up in our self-deprecating jokes and collegial bickering. Underneath all the banter, a serious and terrible question: how the hell are we supposed to build a life?

To be alive in 2019 is to know something about feeling insignificant. How can we not, when we’re jostling for space and resources with nearly eight billion other souls, each with an entire cosmos of desires, thoughts, and feelings roiling in their skulls? It’s more information than our mammal brains were built to process. When I think about this stuff, I’m left with a big, dumb feeling of incomprehensible enormity.

The stories we consume are similarly super-sized. How much time do we spend with books, television, movies, music, and games crafted by the intelligence of strangers, a tiny sliver of the population shaping the contours of our inner lives? It’s a one-way street—I read a book and my heart is changed, but I cannot return the favor. The book stares back at me, blankly. In the book, I see a stand-in for a person I will never meet. After that there will be another book, then another, raw content eternally generated and placed before me to chew up and swallow before I move on to the next thing.

Even in our small hobby, we can feel the deluge. Hundreds of games are released each year, countless Kickstarters rise and fall, and you can’t throw a rock without hitting a self-appointed critic. These things can bring us joy, at least for a little while, and then most of them will disappear and be forgotten. It’s enough to make you wanna put away your notepad and your stories and your prototypes and your poems and your unwritten hot takes and lock them away for good.

This is what we are up against, friends, but I am not without hope. It’s true that we’re all tiny fish in an unimaginably large pond, and that we’re unlikely to stand out in these vast, murky waters. In fact, we might just get swallowed up. Our consolation prize for all this uncertainty, though, is wonderful: we get to hang out with the other fish.

I used to think roleplaying games were a form of escape, an acquired entertainment taste that, despite its idiosyncrasies, served basically the same function as TV—a way to step outside yourself for a while before being sucked back into our everyday drudgery. Now, though, I think they serve a higher, more essential function, but this cognitive shift could only happen once I began rethinking the terms of my own failure.

Looking back at my Blades in the Dark group and our little three-month jaunt, I don’t think we told any sort of exceptional story. If I tried to recap the characters and the plot for someone else, it sure wouldn’t come out like a literary masterpiece—it would sound like blithering nonsense from a second-rate hack. But of course, that’s not the point. When I think on my time with Anatoly, Dr. Blebton Lucius Mooney, Orlan “Daddy” Skelkallan, Bogsworth Vein, Abbascu, Cass, and the other peripheral members of our badass gang, the Friends in the Dark, I think about the weird and beautiful alchemy that happens when you and your friends smash your brains together to come up with something that is only yours. A story that can’t be marketed, resold, submitted, evaluated, broadcast, or otherwise eaten up by the economic machinery that can feel like it is sucking us dry.

I don’t know how to succeed, and I don’t know if my friends will be widely published or widely read or ever get the recognition or stability I know they deserve. But I’m slowly learning to defuse my own fixation on my failure to excel in this deeply fucked world and instead focus on connection with the fish around me. I want to celebrate my Friends in the Dark, and all the others willing to spin our own weird little tales in our own weird little corners of nowhere.

Discuss this article
Log in to comment
Posts in discussion: Blades in the Dark - A Minor Complication, Pt. 3

GorillaGrody replied the topic: #295342 11 Apr 2019 12:58
I’m running a D&D campaign with a similar group of writers and academics. We very quickly took up residence in the library of the College of Selune, and it’s apparent that we’re setting ourselves up to oust the overbearing administrators and establish it as an instructor-run institution. Small steps. We first had to kick the rat men out of the library.

Games can be liberatory with the right group!

GorillaGrody wrote: Games can be liberatory with the right group!

Ain't that the truth! I sure do miss you guys.
Read More...