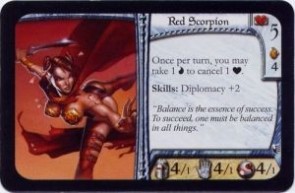 I was rather disappointed in Runebound. I gave it many chances, tried different varients, but it always left me feeling underwelmed. It was just kind of long and repeative.

But then Mr. Skeletor wrote the Runebound Shopping Guide. After reading that, I decided to add Walkers of the Wild (market deck) and The Dark Forrest (adventure deck). I also added a second set of movement dice to seed up that part of the game.

Walkers of the Wild  adds a bunch of inexpensive weapons and armour. This really sped up the beginning of the game, allowing us to advance faster, so the game didn't bog down at the beginning and over stay it's welcome. The Dark Forrest added a bunch of Challenges so your turn isn't always just fighting dudes. The rewards are also more varied. For example one is to steal an item from another player. There are others that allow you to mess with people's movement. There are also a few quests in there.

I 'm really glad I didn't give up on Runebound. I think it will be getting much more play now. I may even have to get another expansion to add some more characters to the game. However, I'm waiting for Mr. S's next Runebound shopping guide to decide which one to get.