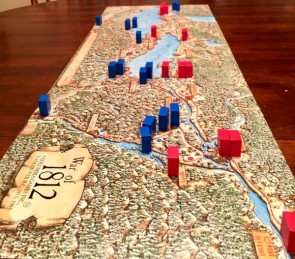 Game Name
Publisher
Columbia Games
There Will Be Games

This article is for someone looking to get into block games - which is not like getting into a car, but more like getting into trouble with your spouse - and is leaning towards either of the two classic low-complexity "introductory" offerings from Columbia Games:  War of 1812 or Quebec 1759.

For lack of a better sorting protocol, Columbia's block games can be broadly swept into three categories: the classics from the 1970s and 1980s (e.g, Quebec 1759, War of 1812, Napoleon 1815, Rommel in the Desert), the resurgence in the 1990s (e.g., Eastfront, Bobby Lee, Victory), and the modern era from 2001-present (Hammer of the Scots, Liberty, Crusader Rex, and all subsequent releases).

As far as my own gaming background is concerned, I would have loved to discover games like Quebec 1759 and War of 1812 (quick, fun) in the 1980s - if only I'd known of their existence.  Instead, I got stuck trying to ineffectively puzzle my way through Panzer Leader and Up Front.

That's OK, though.  Nowadays, I'm making up for lost time.

I'm assuming that you already know a bit about the bluff-and-attack block game system (blocks are upright to hide their identity and strength, blocks are rotated to change their strength, group activations, etc.), so rather than describing the system in detail I'll instead jump right into the main issue: Which of the two games is better (if any) for new players?  With this in mind, let's put Quebec 1759 ("Quebec") and War of 1812 ("1812") side-by-side and see what shakes loose.

To start, the goals of the two games are quite different. In War of 1812, the goal is to have at least 10 more VP than the other player at the end of any game year (1812, 1813, 1814).  If this doesn't occur by the end of 1814, the game ends in a draw.  Points are gained by controlling lakes (with ships), controlling enemy-colored victory towns (with land troops), and - since each land unit is worth 1 VP to the owning player - keeping your own units alive.  Early on, the British are on the defensive and need to hold out for their increased mid- and late-game reinforcements.

In contrast, the win conditions in Quebec 1759 are specific to each side.  The only way for the British player to win is to control the city of Abraham on turn 16 (the final game turn).  The French player wins by either (a) stopping the British player from accomplishing this goal, or (b) chiseling away at the British units until they are reduced to fewer than 20 total strength points (across all units). So, even if the British control Abraham on turn 16, they still can still lose due to attrition by dropping to 19 strength points or lower.  As you may surmise, the French in Quebec are entirely on the defensive and are doing their best to simply stop the British invasion.

Turns in both games are simple enough that each can be summarized in a single paragraph.

A player turn in 1812 has three phases: a naval phase, an army phase, and a battle phase.  In the naval phase, a player either builds a new ship unit (at one strength) in a port, increases the strength of one ship in port, or activates (i.e., moves) all ships on one lake.  Next, in the army phase, a single group of blocks (i.e., a set of blocks all in the same town) is activated and moved; the blocks can move to the same area or split apart to different areas in any combination.  (There is also the possibility of an amphibious move of land units across a lake, which combines the naval/army movement together into a single move.) In the combat phase, battles occur in any areas (lakes, towns) containing blocks of both sides.  Note: This is different from newer block games, in which both sides move and then all battles are resolved.  In 1812, it's player 1 move/resolve battle(s)/player 2 move/resolve battle(s).

A game turn in Quebec 1759 is a different story, in that each player secretly writes down their order for a single group for the turn, and then the orders are simultaneously revealed and resolved.  Just like movement in War of 1812, an order activates a single group.  There's a lot more water in Quebec, though, so much of the movement - early on, at least - consists of amphibious movement of British units from Ile d' Orleans to nearby land zones in the Bason area.  As his/her entire order for the turn, the British player also has a special option of moving ship units from the Bason water area to the Laurent water area (or vice versa) to support additional amphibious movement; similarly, the French player has a possible special order in which s/he can send the Ottawa (Indian) unit to any zone on the board to scout or raid British units in that zone.

The simultaneous movement (which is optional in War of 1812) works much better on Quebec's smaller board, as it's always possible for the shoulder-to-shoulder French/British pieces to attack or slyly retreat.  Maneuvering the Americans/British in War of 1812, in contrast, frequently involves the marching and grouping of individual pieces, which can drag the game; the need to prepare for winter each year in 1812 just accentuates this unfortunate characteristic.

Combat in Quebec, with its three-column deployments, routing, dummy/detachment units, and reserves, can be a real nail-biter and is always fun. War of 1812 takes the least interesting part of Quebec's battle matrix - the all-in skirmish - and uses that as its entire system.  In both games, combat involves a LOT of die rolling and hoping for that 1-in-6 chance for a hit.

Since both Quebec and 1812 predate the A/B/C initiative system, combat in the two games strongly favors the defender in battles where the two sides are equal in number - although this situation seems somewhat more likely in 1812 than in Quebec.

Massive pitched battles can effectively end either game early, but this seems to be a greater possibility in Quebec.  Is this a bad thing?  I'm not sure.

Both games include rules that reflect interesting contextual details from their respective time periods, including American militia not wanting to cross into Canada in War of 1812 and troop losses/desertions from supply capture and British farm-burnings in Quebec 1759.

While War of 1812 and its greater number of map areas may ultimately have more replayability, Quebec 1759 is shorter and - due to its bluffing, outguessing, and decisive routs - more viscerally satisfying.  So for me, Quebec 1759 is the better choice.

The two games are different enough, however, that owning a copy of each is acceptable, and even suggested - but keep in mind that both of these venerable "classics" are better viewed as family or peer bonding experiences rather than deep forays into block wargaming.  For an up-to-date introduction into modern block gaming, Julius Caesar, Richard III, or Hammer of the Scots are your best bets.  Regardless, both War of 1812 and Quebec 1759 are worth your time and effort, if you're so inclined.  Buy today!