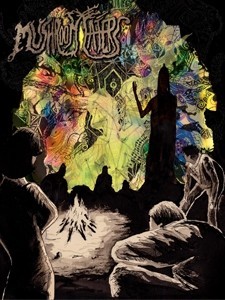 The Shaman is old. A future practitioner must be chosen to guide the others into their altered states of consciousness for the purpose of physical and psychic healing. As part of an ancient tradition, apprentices gather around a fire to drink a strong mushroom potion. The Shaman's quarters are warm and comfortable. The fire burns in the middle of the hut. Smoke moves through a hole in the roof. The sun will set soon.

The Shaman and each apprentice drink from the bowl simmering near the fire. The taste, bitter and revolting. The Shaman's assistant does not drink; he stands calmly beside her. The assistant is invisible. Adorned in animal skins and strange ornaments, the Shaman begins to guide the ritual. A drum is tapped with elderly fingers, creating a primitive disjointed rhythm. The weathered drum is played for some time, then stops abruptly. The Shaman looks about the room. She looks up to the ceiling, observing the smoke escaping into the sky.

"The plants now speak to us."

In the adventure board game The Mushroom Eaters, 2-5 players are apprentices who have consumed a drink of the psilocybin mushroom. Each player enters into a psychedelic state together. The Shaman is guiding and observing the group, trying to understand who would be the wisest to replace her. While the group travels together, some may wander into faraway realms of their own mind, but when the mushroom wears off everyone will return. The wisest apprentice is chosen to guide the village in the future.

This is the first game in a series to incorporate an "Action Path". Each player uses a hand of cards to help the group advance along this path. If cards are played correctly, the path may help the individual or the group entirely; if cards are played poorly, the entire group could be affected by the changes in the environment. Players aim to gain Experience by awakening to new understandings, centering one's self in the oblivion of the moment, gaining intense realities witnessed in the Great Paradox, and building wisdom from profound revelations.

The Mushroom Eaters quietly began fundraising for a reprint on June 13th and will go to July 12th.  Every game pre-ordered will be made.  The quantity of pre orders will determine the manufacturing

1 to 79 GAMES PRE-ORDERED:    Each game will be hand made BUT that will be it.  WILL NOT MAKE ANY MORE GAMES BEYOND WHAT IS PRE-ORDERED

80 to 249 GAMES PRE-ORDERED:  Manufacture at least the game board.  Hand make other elements but also manufacture what we can.  WILL NOT MAKE ANY MORE GAMES BEYOND WHAT IS PRE-ORDERED AT THESE QUANTITIES.  THE LABOR ON MY END TO MAKE ANY MORE WOULD BE TOO TOUGH.

250 GAMES PRE-ORDERED & BEYOND: Manufacture 500 games here in Denver.  There would probably be games left over after those pre-ordered.

The game was intended for a small audience, the makers wanted to assure this audiences would have a chance to get the game.  KS was avoided as  a fundraiser because the price needed seemed too high to achieve.  The makers wanted the game to be realized regardless of what was ordered.

Cutthroat Caverns
5.0
KB Ken B.
"This is a fast-playing, innovative little card game where you..."