The Tower of Madness 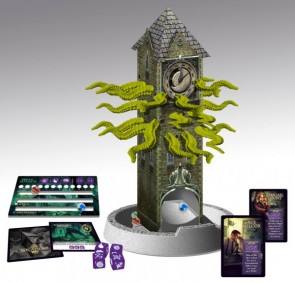 A three-dimensional clock tower, stands a foot tall, filled with marbles. Thirty other worldly tentacles push through the tower walls in every direction, in this high tension, push your luck dice game of Lovecraft inspired horror. Each Location card has its own unique dice challenge. Fail and you may slip into insanity – or summon Cthulhu and end the world itself.

Casual game play, dice-rolling fun, tense and gripping as you draw tentacles and await your fate!

Players take turns fulfilling location cards in push-your-luck dice rolling, however if they fail their investigation, they must face the tower. The actual tower stands over a foot tall, and houses colored marbles held in place by 30 demonic tentacles, much in the style of the older game Kerplunk. Failing to fulfill a card means pulling a tentacle from the tower, possibly releasing colored marbles, which add to your discovery total but permanently affect your character. Even worse, the tower may release a DOOM marble, which is one more step towards summoning Cthulhu, and ending the game. The investigator with the most discovery wins.

ubarose replied the topic: #274925 07 Jun 2018 15:26
From what I have heard, it is indeed a combination of Yahtzee and Ker-Plunk. Taking mainstream games and putting a twist on them is Smirk & Daggers stock-in-trade.

Colorcrayons replied the topic: #274926 07 Jun 2018 15:29
It must be the utter annihilation of my sanity brought on by astral alignment, but I want this version of Kerplunk pretty badly.

One of my favorite childhood games.

What the actual fuck

ChristopherMD replied the topic: #274941 07 Jun 2018 20:04
This will be an awesome thrift shop find someday. Possibly a couple years after release.

Oh, you KNOW that's going to be the copy blurb on the cover of the game.

Yes, I get that this has CUSTOM MOLDED PARTS but fuck that. That's steep. I'm guessing 39.99$ at Miniature Market and Coolstuff.

And then 5$ at Goodwills in cities which have large gamer populations.
Read More...

Castle Ravenloft
4.0
H HiveGod
"This is about as close to 4th Edition D&D as..."