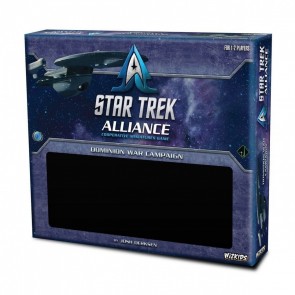 The Dominion War Campaign recalls the Dominion War storyline from Deep Space Nine, in which the Federation formed an alliance with rivals and enemies to repel an invasion from the Gamma Quadrant.

In Star Trek Alliance: Dominion War Campaign, players Federation ships go up against the Dominion, the most powerful political entity in the Gamma Quadrant. Together they must complete a series of missions, gaining experience which is spent between missions to upgrade ships and improve abilities.

Dominion War Campaign includes everything two players need to play through the entire six-mission campaign. Multiple copies of the set can be combined to let up to six players participate in the campaign.

The ships and upgrades included in this game are fully compatible with the Star Trek Attack Wing game.