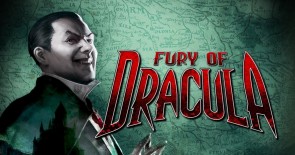 Game Name
Fury of Dracula
There Will Be Games

Nomad Games are incredibly excited to announce their next project, a digital adaptation of the classic board game ‘Fury of Dracula’. Originally published in 1987 by Games Workshop, Nomad Games will be adapting the Fourth Edition of the board game, which was released in 2019.

Set in late 19th century Europe, Fury of Dracula sees four brave vampire hunters hunting down clues to stop Dracula before he creates an unstoppable army of mindless thralls! With a strong emphasis on teamwork and gothic horror, Nomad Games are aiming to create a digital adaptation that appeals to fans of the original game and new players who have never had the chance to stalk Dracula across Europe!

Nomad Games have previously developed the digital adaptations of classic games such as Talisman and Fighting Fantasy, making them the perfect studio to deliver a faithful adaptation of this classic board game.

“Taking iconic board games and adapting them for digital platforms is something we’ve always excelled at, so we’re very excited to show the world our take on Fury of Dracula!” said Don Whiteford, Managing Director of Nomad Games.

As for digital FoD, I'd be into it having Dracula ai so I could play the game once and not be Dracula. I mean I like being Dracula generally but yknow.

Ah_Pook wrote: I hit thank you but I was looking for the "Groan" button

Did his joke make you cross?

Ah_Pook wrote: I hit thank you but I was looking for the "Groan" button

Did his joke make you cross?

hotseatgames wrote: Did his joke make you cross?

Now, now. Don't suck all the life out of it.