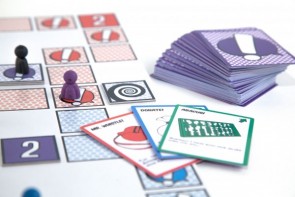 Typically in tabletop and card game, rules need to be clearly laid out. You want anyone to be able to pick up the game and know exactly how to play. This is the typical case, for good reason. Confusion and lack of clarity leads quickly to frustration.

In my most recent game, Mr. Game!, this is not always the case. We play with the idea of every player interpreting the rules differently. Because of this, we write the rules somewhat vaguely. This has been a design choice that has both made for fun experiences, and also bit us on the ass in many occasions.

We started with a very specific rulebook detailing all the fun things you can do in the game. Our initial thought was the typical one: If there’s a mechanic you can play with, put it in the rules. Then we realized there were so many different ways to play because the core nature of the game was rooted in change. Players’ abilities come and go, the board itself can be manipulated, and we introduce mechanics as the game moves along with cards that we never explicitly state in the rules.

All these different ways to play were unique and equal, so how do we handle them in the rules? Do we list every option of play? Or do we choose one, as most games would, to make it straightforward? We took an alternative approach. We decided to simplify and leave out many of these rules. This simplicity on the surface makes the chaotic and complex play that comes through exploration so much more rewarding.

We found that so much of the fun of playing came from discovering the nooks and crannies of the game, and allowing our friends and playtesters to come up with ways they personally feel should deal with the situation and hand. Essentially, players design the game in some way or form as they play. The big question was where do we draw the line.

The answer we came up with — after many variations, playtests, blind tests, and feedback from other designers — was that the core rules need to be very explicitly laid out. These could not be vague, they had to be straightforward, clearly worded, and simple. Although there is improvisation in the gameplay, there needs to be an extremely strong foundation for this to work. We want the players to be able to play, explore, and modify the game without breaking it.

To detail the mechanics so you can have an idea, the game is simple. Players roll dice, move pieces around a grid board, and try to land on a goal to win. Landing on “exclamation point” spaces make players draw cards. This is the area where we let the wild west run free.

Although we do balance and fine tune the cards, they essentially all do one thing: They break the core game. They change how players move, change the goal, add to the board with tile pieces, and so much more. None of which is covered in the rules. These card actions can and do conflict and don’t always play nicely with one another.

To solve this, we have a player act as a “Mr. Game”. This player is essentially a judge and has the final say on decisions. Every player has a different viewpoint and different personality. Sometimes personalities conflict, sometimes they don’t. You can get such a wide range of players to be “Mr. Game” making this a really fun and unique mechanic that keeps the game moving and different with every play.

Whether you’re a rules lawyer who sticks tightly to the exact wording of the rules, or if you just want to feed into the chaos and allow crazy and interesting interpretations of the rules, there’s a place for you in Mr. Game!, and we encourage this exploration.

Mr. Game! is on Kickstarter now. It has been the passion project of 4 friends for almost 2 years.