Adventures in cabbage #1: "Go for your greens!"

I blog therefore I am

It is a truism that our hyperconnected world — this mighty engine of commerce, knowledge and communication in which codebots endlessly war over the dupes, the data and the users' processing power and into whose coffers even our free activity is given — a truism that this incredible techo-social spectacle- the crowning scientific and technical achievement of the 20th century; that this is the original Cyberpunks' mid-80s low-life visions made virtual flesh (virtual by virtue of the lack of ubiquitious direct neural jacking with its resulting sensory immersion- that emotionally empty screen so beloved of the trolls who soil and poison the social networks). When my pal's copy of William Gibson's Neuromancer circulated round to me back in 1984 little did I realise that I was about to experience with unsurpassed intensity a delicious cultural trope- getting in ahead of the avalanche unleashed by a new voice at the cutting edge of a genre-redefining honest-to-god artistic revolution. No sudden impact this. It was a slow-burning mind-bomb the full impact of which only became evident when, after a month's apparent indifference, I suddenly realised that I couldn't get the damn book out of my mind. 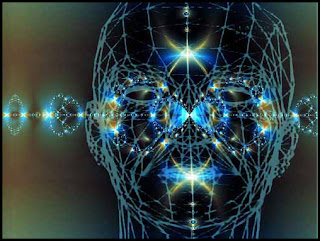 Now, some 30 years later, I still can't get cyberspace out of my system. I trawl the net for hours on end, checking-in regularly on my social networking sites even when I'm not actively commenting, clicking through on links for quick reads, clipping some for reference. I think it was the internet which heralded the death knell of my miniatures habit. I can still remember the way I had to start stealing time back from the Bolter & Chainsword to actually do some damn painting! I'm going to miss writing about all things GW now that my fanboy phase has come and gone- and you can hardly miss what the evil money-suckers are tempting space marine fans with now (to show just the most striking of the imminent new releases): 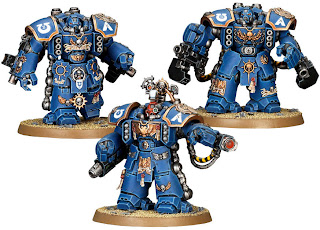 Oh, I can just imagine those in screaming scorpion green! But no, gone are the days when I could happily fill pages with simple slathering. No, I need new material now. Which brings me to my adventures with cabbage.

My impulse to launch a dramatic new dietary initiative stems immediately from my diagnosis, 3 years ago, with type 2 diabetes. But my poor dietary habits date back years and years, to when I left home for university. Equipped- at my mother's insistence, with a basic working knowledge of a kitchen I was quickly able to organise myself into the '1-square-a-day' routine which was the easiest and most economical way of keeping myself fed. Never much of a morning person, it was easy for me to ignore breakfast and otherwise to get by by snacking. And so it's gone for more than 30 years, a habit sufficiently deeply ingrained to be glacial in its resistance to change. It's time for a new approach: shock treatment and a diet diary. 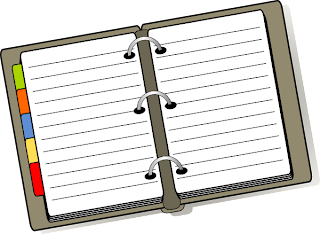 The idea of blogging my efforts to improve my diet and manage my diabetes struck me very early, as you can readily imagine. I just felt that the more purely personal articles would be out of place on RD/KA!, which I have always kept strongly focussed on the hobby geekery. I even went so far as to consider setting up a whole new blog devoted to this and related topics, a kind of OT sister site to RD/KA! if you will. That ill-conceived idea thankfully went no further than the drawing board. But now I need new material, so onwards, to adventures in cabbage.

There's no need to turn a trip to the shop to buy a cabbage into some kind of mock-heroic drama. Consider it done. A cabbage was duly obtained- this cabbage, in fact: 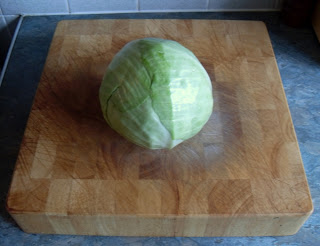 And that's it for today. Tune in soon for more 'Adventures in cabbage'.

Find out how John gets on as he tries to turn a 1.2kg cabbage into at least 4 meals. What will the menu plan be? How many lunches will this give him? Will John be able to move beyond mere recipie-following and learn to improvise meals using his knowledge of ingredients and techniques, and his sense of taste? All this and more coming soon in 'Adventures in Cabbage'. ;)