Teach board games in a post-Magic World 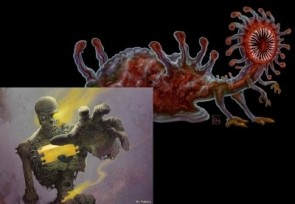 Reading this sentence, it doesn't seem like that unique of a statement anymore. I know in a decade ago, people were telling stories of playing Settlers of Catan the first time at a Magic kitchen table or a D&D session. But this was when the nineties Renaissance of board gaming was coming into full swing, with the German invasion streamlining the sorts of innovation that Avalon Hill and other AT giants had been doing for two decades, the sort of innovation that had inspired the very theme and game play of something like Magic in the first place. And there were these players who started with Magic, back when Type 1 was still an official term, and these players came into board games right around the time that Rio Grande and Fantasy Flight wanted them to, at the turn of the millennium.

However, I came in the other way, through board games to Magic. My experiences playing board games are actually sharply divided by my time with Magic. There is before and after. Before, I was not as suspicious of rulebooks. The games were determined largely by the rule of, "what do you think the designer meant?" Timing was forgiving, and casual play allowed many take-backs of actions that didn't reveal any previously non-public information. I don't want to say that those were more innocent times, because that sounds goofy and a little cheesy. But it was after Magic that I really started to critically examine board games again.

You see, Magic has an important aspect that most games don't have: a tournament system, complete with an international judging body, professionals, (online) channels broadcasting Pro Tours and Grand Prix, teams with corporate sponsorship, the whole lot of it. What that implies in a practical sense is a zero-tolerance to rules ambiguity. Being a game that has tried to reinvent its own strategies (in a specific sense, not a general sense) almost annually, there are an increasing number of rules that have to be clarified ever few months. This means that the comprehensive rules are an intimidating, almost indigestible document for many players. It also means that every question has an answer. Most players I know haven't even heard of (much less understand) some of the more obscure or arcane rules like Substance or Layers. I'd compare it to government code: enough has been explained to me in my life that I can pretty much follow the rules, but the details are in fact there should I ever need them.

To a degree, this causes minor problems in my post-Magic board game world. I still play EDH weekly with my group (having left the Standard tournament scene about a year ago). With the same group, I get to do fifteen-hour board game marathons about once a month. And it's the board gaming that I prefer. I love rolling a fist full of dice, seeing card board and plastic on a board, marshaling dudes on a map, even pushing wooden cubes around efficiency engines in the right cases. My favorite game is probably Cosmic Encounter. I got a copy soon after the Fantasy Flight reprint and never looked back. Fifty aliens? Negotiation? It was all of the variety, chaos, and tactical planning that I could want in a game. And yet, I don't play it that often. My current group had problems getting into it. Not being able to control your attacks was a problem for them. Not being able to do anything directly with a sub-optimal hand was another.

The most problematic part of Cosmic for most of them were getting around the timing issues. In Magic, there are two timings: sorcery (only during your own main phase) and instant (largely whenever). In Cosmic, there are eight different phases which care about if you are the main player or offense or defense or anyone or not someone. Some of these power are mandatory, others are optional. On each card and each alien, all of these timing restrictions are different. It's a huge leap to go from a well-regulated timing system of two to a hectic read-each-card-to-be-sure timing system of whatever. Coupled with this is the fact that Cosmic did not use a stack (except for Zaps, certain flares, certain techs, etc.). The stack is a very enabling mechanic in Magic, and the exception-filled lack of one in Cosmic was a problem vocalized by my group more than once.

And so Cosmic doesn't come out often, but plenty of other games do. I am living in a post-Magic world now. Add this to the fact that I own the games, and therefore learn the games and teach the games. With some games, we don't have an clear playing field like in Magic. Not all rule books can be written by Chad Jensen, and more often than not, I wish that they were. I trawl through rule books more often, trying to make sure I have the answers before the questions are asked. Not all games have an FAQ. Some FAQs are actually counter-productive to the goal of clarification. (To bring up Cosmic again, ask Bill Martinson sometime why he wrote the Cosmodex.) I hate being the guy who wins because he knew the rules best. I hate more when a game doesn't get played again because of such an occasion.

So I play Magic weekly, and board games once a month. Maybe part of it is getting older also, when knocking out an hour game of EDH is easier than a four hour AT game I'd rather play. But I know that the learning curve is the an equally important reason I play fewer board games now, and different games too. It took getting into Magic to really appreciate that, to appreciate how to choose games. My next board game marathon is in two weeks, and I've had a lot of trades recently (including my first math trade). I'm looking forward to bringing a pile of new games. I know what games will get played quickly out of what I bring. Acquire and King of Tokyo have like two pages of rules each. They're in. Blood Bowl: Team Manager is a bit longer in the rules vein, but it should have minimal questions during the game, and will probably be followed with, "I think I'll know what to do next time." Merchants and Marauders is what everyone wants me to bring and what everyone is looking forward to, because there is a great deal of hype with the pirate theme and plastic ships. I don't know if we'll play it a second time any time soon. I should probably focus on the first time first.

These four games I read in my post-Magic world. It's melodramatic to say that I got complacent in the land of complete clarity of rules. But sometimes, I do worry about teaching new games to players with a similar level of complacency. I don't worry too much, though. I don't want to make it sound like I don't want to teach new games, or play new games. I still prefer board games, and they love them too. We'll leave EDH to Fridays--once a month, we'll have our board games.