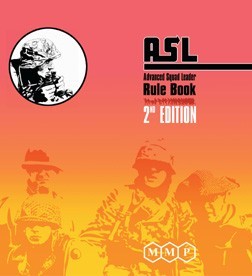 That, dear reader, is a damnable lie.

Picture if you will a nerd of the early 1980's. Bushy, unkempt hair, eye glasses with huge plastic frames, shorts that were way to short and socks that were pulled up way to high. This lad hasn't got his driver's license yet and he is trudging through the park and over the train tracks on foot to get to the commercial plaza that is as close to a mall as this small town has. The boy has saved his allowance for several weeks is on his way to KB Hobby to buy yet another Dungeons and Dragons module that he will read over and over but never get a chance to play. Instead, after he has browsed the shelves for what might have been close to an hour, he pulls a game box off the shelf. The cover is a stylized image of a German soldier heaving a potato masher hand grenade. It's a game called "Squad Leader".

Fast forward to the early 90's. The young man has graduated college. The short shorts are gone and the hair is cut. He wears contacts, has his own car and is gainfully employed. A newly made friend asks, one night after being out at the bars, if the young man has ever heard of this game where you have World War II soldiers fighting on a map made of hexes. Thinking of the dusty box that contains the game often looked at but never played, he quickly answers "Hell yes!"

These two spend that summer playing through scenarios. Attempting to learn the system through the "programmed" learning scheme. It is so much fun that, were it not frowned upon, he would squeal like a little girl in delight. A youth spent pining to play games such of this, coming to fulfillment. However, bliss was not to last, for as they progress to more and more advanced scenarios the complexity ramps up, and ramps up, and ramps up. They stop playing eventually without ever declaring it. It becomes more trouble than it's worth. And there are beer and girls. They are men in their 20's after all.

A few years later, the young man has become connected to what is known as the internet via his 28.8bps dial up modem. The global community expands his horizon. "I wonder", thinks he, if anybody plays Squad Leader?" Indeed they do. He plays via the new fangled communication system known as email. He looks forward to each proclamation that he's "Got Mail!" from the female voice of AOL that lets him know a new move has arrived. However it is a painstaking process. Each move and action must be typed out long hand with exactitude for a casual mistake can lead to the players having disparate game states. The turns can run 10 pages or more when printed out. He lacks the dedication and pet free environment required to leave such a game set up.

The scene goes dark. The wilderness years. The scene opens 15 years later with the skidding of tires and the screeching of metal on tar.

A tragic motorcycle accident puts a man into a debilitated state for over 3 months. His despondent and idle mind turns to Squad Leader once again.  The internet has come a long way in the intervening years. He learns that Squad Leader, while not dead, has been supplanted by Advanced Squad Leader. A reworking of the system from the ground up to make it better and more cohesive. He orders the rule book and the basic set of Beyond Valor. Certainly he will have a great deal of time to read those rules. Not like he's leaving the couch anytime soon.

The package arrives, heavy and large. However maybe it's his mental state or maybe it's more to do with the game than the man, but he can't get through more than one or two paragraphs without putting it back down. It's so dry. So dull. And it certainly is not laid out in a way to "teach" the game. He opts for re-runs of Northern Exposure instead.

ASL has one immediate benefit though. It opens the man's eyes to the hobby of modern board games and the avid community centered around the same. He dives in. He is happy again. This continues for years.

One month ago, the man takes stock. He spends time evaluating what games bring him the most happiness. What games bring him joy. The answer is clear. It is as it ever was, war games. He still likes to play other types of games but it isn't the same. He realizes that outside of war games, it's been nigh on a year since any other new release has even peaked his interest.  This is a stage most gamers reach at one point or another. The newness is gone and with it the equating of new with good. Just being the latest does not make a game the greatest.

He receives a message over Facebook from a friend half a world away "Do you want to try and learn Advanced Squad Leader?"

I don't get why people play ASL when games like LNL and Combat Commander do the same thing with less of a headache. It's a dinosaur.

KingPut replied the topic: #199732 19 Mar 2015 06:54
Great read Repoman. Luckily, you posted the picture of you with the short-shorts and long-long socks so I had a good visual. I'm a complete war gamer at heart. Most non war games just seem ok or 6.5 on the TOS scale to me now. They're just fillers between great war games.

CC is a fun time but in no way is it detailed. It's like a quick game of snakes and ladders compared to a total brain meltdown. It's a quick game but it CERTAINLY does not have the depth of ASL and nowhere near the narrative. FYI that is why people play ASL.

Chapel replied the topic: #199742 19 Mar 2015 10:01
It's been a bunch of years since I last played ASL. When I came to Austin in '97 I met up with a REALLY active group of ASL gamers, and spent the next two years pretty much playing nothing but ASL. This was after graduating college where I played mostly 40K and Magic.

In late '99, the euro gaming bug set in and I ended up leaving ASL behind. ASL is a lifestyle game for sure, and quite fulfilling. Maybe someday I will dust off my chit containers and play again.

I haven't had a serious motorcycle crash yet, but theres always time for a first.

He made the right choice.

ThirstyMan wrote: LNL is about the worst tac game I have ever played.

CC is a fun time but in no way is it detailed. It's like a quick game of snakes and ladders compared to a total brain meltdown. It's a quick game but it CERTAINLY does not have the depth of ASL and nowhere near the narrative. FYI that is why people play ASL.

Maybe I'll come around to it one day, but today is not that day.

billyz wrote: Awesome! Keep learning so that you can teach me!