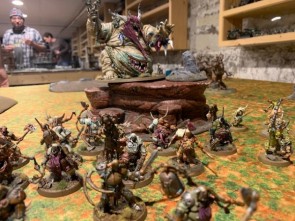 So TLDR no rules are good, no aesthetic plausible. Plato circled around the broad territory of the mimetic looking for truth and found none, only abstractions. What angered him, I find beautiful. The hard fact of culture absorbs and transforms the shapelessness of art, the rules of which are subject only to our sympathy, the amalgam of all of our pasts. So, some of us engage in the bizarre exercise in extreme metagaming that the board game Root describes, but reject Warhammer, because some of us like cute animals and the suggestion of Foucauldian bio-politics, while  others of us still see the weird subversion of fascism in Games Workshop’s 40,000-year Reich somewhere behind the wobbly stock listing. I wanted to like this game. I really did. So I kept trying.

My list had to tighten up. It was taking on the same form as my acquisitiveness, and so I had models and abilities spilling out from under the bed, the closet, the corners of the room. It wasn't working.

The Putrid Blightkings, a beefy, hardhitting unit of Battleline soldiers, would become the cornerstone of my battleline. I picked up another box, painted them quickly, and doubled one of my units. To fill out my ranks, I rebased my irregularly-based Plaguebearers and repaired a few that had been grinding at the bottom of a box. I now had 30 of them, enough to maintain their “Cloud of Flies” ability, which made them harder to hit.

Horticulous and his Beasts of Nurgle were fired, as were a couple of other characters I’d inserted just because they were painted well. I hired the Harbinger of Decay as my general, who allowed all Blightkings and other “Mortal” members of my tribe the same supernumerary 5-up defense as my demons. My figures were built towards survivability. As a last minute insertion, I added the Lord of Blights, a rare ranged fighter among the fistfighters of Nurgle, who allowed my Blightkings to hurl ineffectual skulls at my rivals (and hopefully soften up any opposing rank-and-file before charging into them). I linked a stray group of Blightkings to a character named Gutrot Spume, a nautical-themed fellow with one half of his body enveloped in tentacles, who “landed” on any side of the board he wanted with his crew in tow. I hoped to once again invoke my opponent’s fear of deep striking. Thus finalized, I sent my list to the administrator, and made it to the store to practice with them. It was one week until tournament, and my list of powers and abilities now fit on a single sheet of paper entirely, with a heavy touch of shorthand.

At the store, I found trouble finding an opponent. Most tables were filled with the ongoing 40k campaign. These were battles distant and foreign to my own. I did find a fellow tournament player willing to do a pickup game, and he asked me to set up a table while he finished assembling a model. (I would later find out he was, in fact, not only a player byt the tournament judge and organizer). He had  furtive eyes,  a hyper-articulate nerd resonance, and an affective chill factor in the negative numbers. I did as I was told; a half-hour passed. Some folks stopped by to admire my figures, and a fellow Nurgle painter drew out a model or two and we compared notes. Pleasant enough—in fact, just the sort of interactions I was missing--but people were clamoring for the real-estate, so I approached my no-chill new friend. “Twenty minutes,” he said. “Just give me twenty minutes.” I was inclined to ask him to stuff it, but a certain pleading note made me examine his situation more closely. An older man was watching No-Chill intently from across the table, his eyes darting. No-Chill was constructing a Sylvaneth Treelord, a model assembly built outward in a complex, blossoming reverse-onion pattern from small parts. Before I could ask what was happening, the older man spoke. “He’s helping me,” he said. “Because of the PTSD.” I never found out what the PTSD was about, but the guy looked he could have been a few years out of the military. No-Chill added, “Basically, I’m magnetizing the arms. This guy’s going to have options if he needs them.” No-Chill liked to preface most of his sentences with a didactic TED-talk-like flourish, with a  “basically,” or an “exactly,” or an “in essence.” As we watched the model get completed, the older guy told me his plan to use them in his 3rd edition D and D campaign. “New editions, they’re like a video game, you get hurt, you go to sleep, you get up and you’re all healed. This will be a horror campaign. The trees are going to come to life. People might die.”

We finally got to our game. Like my previous opponent, No-Chill’s was a work in progress. He would be playing Khorne, the chaos faction devoted to Blood and Skulls, rather than to the principles of Blight. His list focused upon his magnum opus, a Red Dragon of Khorne ridden by Vorgorath the Scarred, worth roughly 60 percent of his available build points. It had 30 hit points and 2-up save. “In essence,” said No-Chill, “he cannot be defeated.” It had a cascade several powerful attacks. The model itself was taken from a Forge World list, the secret cabal of sculptors who make exclusive, bespoke figures available only through the company. A non-proxied model would cost the price of a used car. My opponent, to his credit, was using a 50-dollar proxy. All of that was just promises, however. All No-Chill had was a base the size of a small serving tray to represent his special boy. The model itself was at home. He showed a picture of it to me on his phone.

Our mission was to park near a pair of trophies, worth an accumulating number of points each round. It had to be held by either a Behemoth or Hero Unit. His behemoth was more impressive than my Rotigus in terms of sheer numbers by a factor of 4, but I had the more heroes. He, having finished placing his models first, had the first round. His Dragon traversed the table easily with its Flying ability and 14” move characteristic and killed every last one of my Blightkings with a few flicks of its tail, taking no wounds in retaliation. On my turn, I waddled Rotigus up to the Serving Tray of Khorne and ineffectually swatted at it. In retaliation, the Serving Tray of Khorne took him off the board like plucking a rotten apple off a tree. My opponent then won the first round initiative, hopped a few inches across the table, and killed Morbidex and all of my little Nurglings as if he were wiping a bit of schmutz from a mirror.

My opponent looked annoyed, so I went on.

“I’m not going to concede during the tournament, because I know that’s not done. But if this is just a learning game, I have to admit I’m not learning a fucking thing right now. I feel like a tin can, and I can’t imagine a single scenario in which this game would ever be played for fun.”

Surprisingly, my opponent perked up I supposed he was energized by my honesty. He walked me through the basics of dealing with large enemies. “Basically,” he said, “you can’t really kill a Forge World Model like this, at least not with an army with no Rend properties like yours. You have to tie him up with smaller units and let your larger units run amok in the back." He gave me a few other pointers, and the black cloud over the afternoon dissipated. There are some times when not having Chill  helps, and explaining how to beat a Red Dragon of Khorne is one of them. I was resigned to play out the tournament--resigned, as I had been from the start, to losing it. But I had learned a little bit about why.

The older guy wandered over as I was packing up my models. His jaw dropped in the most guileless expression of awe I think I’ve ever seen on an adult man. “Those Nurgle are beautiful,” he said. “Paint mine. I’ll pay you.” I made arrangements instead to meet him and show him some techniques I used to paint mine. My plan was to assess his level of skill in doing them for himself. I liked the group at the store. I wished them the best.

I heard again something I’d already heard a few times. “Exactly. You’re a favorite to win the painting competition.” It felt a little like a booby prize, but I’d take it.

I skipped my next opportunity to practice, and set my army aside for a while. I would take what I had into the day of the tournament, come bile or high drudgery, blight or blood.

jeb replied the topic: #292547 18 Feb 2019 14:35
I feel like you shouldn't besmirch the painting prize. That's like 80% of the time investment in this game. They don't award that because it's no big deal--it is fundamental to the WH experience.

Jackwraith replied the topic: #292548 18 Feb 2019 14:38
I agree. Half the reason I stopped playing GW games is because I didn't feel like painting anymore and I didn't want to play with non-painted minis if I expanded my armies or picked up a new one. Skill deserves to be rewarded and winning the painting contest is a mark of skill, no matter how the games turn out.

GorillaGrody replied the topic: #292553 18 Feb 2019 15:18
Well, spoiler alert, the Tournament happened this weekend and I won the painting prize. More on the rest later.

I was proud to have won it, and in fact that is about 80 per cent of the game for me, too! But the grass is always greener on the other side of the fence, and I didn’t like that the game itself was such a persistent mystery.

Ska_baron replied the topic: #292634 19 Feb 2019 17:02
Damn - just binge-read these and am truly looking forward to reading the conclusion. Thank you so much for writing this - your skill is apparent not just technically, but in the ethos you so nicely capture. Best writing on here since Barnes wrote that series of posts about owning a game store.

It also confirms for me that I never, ever, want to play AoS.
Read More...