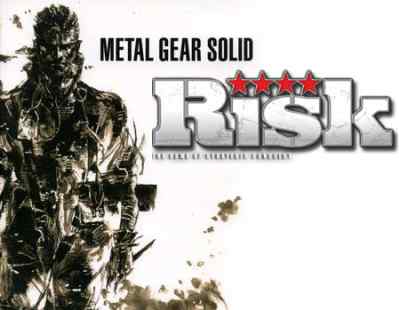 I don’t think anything I’ve ever written has honked off more board gamers than putting Risk in my list of Top Ten Games Every Gamer Should Play. I stand by that. Risk is great, deal with it.

You know what else is great? Metal Gear Solid. Over the past couple of years, I think it’s finally overtaken Castlevania as my favorite game series of all time. It’s daring, weird, funny, thought-provoking awesome, postmodern, and tremendously authorial all at the same time.

So USAopoly did a Metal Gear Solid Risk, and I had to have it. They didn’t send me the bad ass limited edition with the pen-and-ink illustration cover, but I have the collector’s edition (whatever that means) with the graphics from MGS4.

It’s a good Risk variant. It’s not as crazy as Legacy and it’s not as setting-specific as Original Trilogy, but it takes the ‘08/Black Ops game and gives it a little fan service punch. Basically, it just adds leaders, a mobile territory (the battleship Outer Haven), and a currency that you spend to buy cards from the arms dealer Drebin. Like the Konami Code and a cardboard box.

It’s fun, but I wouldn’t recommend it to non-MGS fans. It’s totally a cash-in, but if you like this stuff, it’s OK. Gameshark can tell you more.

Playing some Thunderstone Advance here and there- it’s a great clean-up job. It feels smoother, the changes are mostly for the better, and overall it just feels like a better game. It definitely comes across like a second edition, but I love that it’s still compatible with the old sets.

Got a package from the fine folks at Plaid Hat the other day- four new Summoner Wars sets. The Filth, Mercenaries, and some reinforcements for races in the Master Set. Can’t wait to check this stuff out. Love that the Mercs get their own faction now.

Mass Effect 3, blah blah blah. And so forth. Six hours in, not very impressed. I’ll probably write up a full review at No High

Scores when I finish it.

I got Street Fighter x Tekken the same day, now THAT is a great game. I played until my hands hurt Tuesday night. Totally rocking a King/Poison team, alternating with Heihachi/Sagat. A- review on the front page of the 'Shark.

Vita still going strong, I play those games almost every day in some capacity. Just got Uncharted: Golden Abyss from Gamefly so I’ll probably get that going soon.

Practically no activity. The Vita really has taken the wind out of IOS gaming’s sails for right now. Looking to get the new iPad since they’re tooling it up to compete with consoles. Trying to sell my iPad 2 to effectively downgrade to a smaller, not 3G model of the new one. 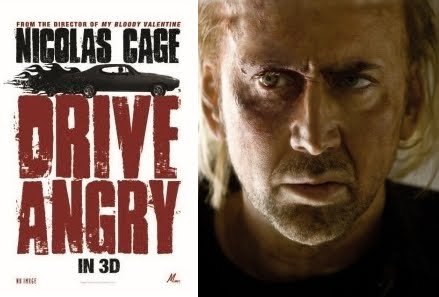 It’s not a good movie by any stretch of the word, but I can’t say that I wasn’t entertained by Drive Angry, the Nic Cage vehicle that hit theaters in 3D last year. It is absolute trash. The catch is that it’s honest about being pure, sleazy junk in an unironic, unhip way. It’s not this kind of bullshit “grindhouse” over-stylized self-mocking crap. It’s an old fashioned grade Z programmer with an exceptionally lurid plot, cool cars, big guns, bad language by the metric ton, trailer park sensibilities, and a completely unexpected element that was in no described by the trailers. I don’t want to give it away too much, but I had no idea the movie was about devil worshippers. Or that William Fichtner would play a mysterious character called…The Accountant.

It’s just total junk, I can’t reiterate that enough. But I totally respect a movie that says “hey, this is gutter-level sleaze, enjoy.” I kind of wish that I saw it in 3D, there’s plenty of ridiculous “comin’ at ya!” moments that would have made the whole thing seem even more grotesquely vulgar.

I just recorded The Black Hole on the DVR so I’m going to watch that tonight. Haven’t seen that in many, many years. I think it may be my first substantial memory of going to the movies.

Mostly listening to early, pre-“1999” Prince. As many of you know, Prince is second only to David Bowie in my pantheon of Godlike Musicians.

Holy cow, “Dirty Mind” is such a great record. Such a great mix of synth rock, funk, R&B, and New Wave. “When You Were Mine” remains one of his best, most thrilling numbers, and “Sister” is still one of his most shocking. “Uptown”, “Head”, the title track- great, great, great. You can really hear the roots of everything from “1999” on, but it’s still right before he hit on developing this sort of ‘world’ that accompanies his music, rich with its own language, symbols, and metaphors. All mostly about sex, religion, or religion and sex.