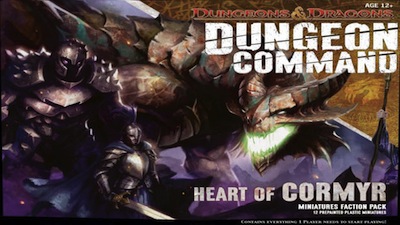 Finally, a review of Dungeon Command. Guess I’m last in line on that one. But I think I like it more than some other folks that have reviewed it. I think it’s a fun, simple dungeon brawl with some surprisingly cool mechanics. And yeah, it really is a CCG with a board. The faction pack thing is kind of lame, but the idea is that it’s like a miniatures game and you just buy what you’re going to play with. Problem is, board games don’t tend to work like that. It’s kind of mis-marketed IMO, but whatever, I like it. So far, every D&D board game since Ravenloft has been good and I’ve kept them all, so that’s saying something.

Review copy of Lyssan just showed up, it looks pretty good. Definitely a Game of Thrones vibe, a little Warrior Knights. But probably simpler than either by the looks of it.

Starship Merchants…wow. This game is really good. What they don’t tell you about it is that it’s really an 18xx game, just without the rails or investments. It’s a straight up, super-streamlined business game. Lots of abstraction, but detail where it counts. Buy (or lease) ships, outfit them, send them out to mine, and take the goods to places that will give you money for them. Do it again next turn, but try to make a little more money. There’s a neat development curve controlled by the players so you can run someone’s ships out of commission if they’re rendered obsolete. I really like it a lot- a very cool minimalist design. Tom Lehmann and Joe Huber. It’s good.

Mostly playing Tales of Vesperia, one of those Namco Bandai JRPGs. It’s nice. Not spectacular, but nice. Unlike so many of today’s brown and darker brown games, it’s palette is all bubble gum, candy, and sunshine. The battle system is real-time, and it really takes some getting used to so that you’re not playing it like Guardian Heroes or something. The story is pretty standard JRPG stuff, but there’s been some actually pretty funny stuff in it. Don’t know if I’ll finish it, but for right now it’s fairly pleasurable.

Thought about buying Darksiders II, but then I remembered that it’ll probably price drop to $20 by Christmas. Ditto Sleeping Dogs. I don’t think I’m buying a launch day game ever again unless it’s something like Halo 4 or Dishonored. Maybe Borderlands 2.

I hear Dominion is supposed to be out this week, but it’s some kind of goofy HTML 5, cross platform thing that’s online only. I dunno.

Man, I hate Y: The Last Man. That’s just about the most ham-handed book I’ve ever read, and the concept isn’t particularly interesting at all. Tons of irritating gender-talk. Gee, men and women are different? MIND=BLOWN.

Starting reading both Jeff Lemire’s latest Animal Man and Scott Snyder’s Swamp Thing, both part of that whole New 52 deal. Both books are awesome, and both are awesome because they follow on from the best creator runs in both series’ history. Animal man draws heavily on Morrison, Swamp Thing on Moore. And there is very obviously some storyline crossover in the works, possibly even a larger “event” thing that I suspect may be brewing involving the “Red”, the “Green” and the “Rot”.

Animal Man is NUTS. It’s even crazier than Morrison’s run. Psychedelic, hallucinatory, and fucking WEIRD. The art is kind of uneven though, Travel Foreman does the bizarre stuff great but his real-world stuff is quite lacking. Swamp Thing is nice and gothic and it totally follows on from Moore’s take on Alec Holland. Floronic Man hasn’t shown up yet, but the whole Parliament of Trees thing is a big factor.

Also looked at All-Star Western, the new Jonah Hex book. It’s pretty good. The first story teams Hex up with Amadeus Arkham to hunt for a Jack the Ripper-style murderer in Gotham City, circa 1880. I may read more of it.

Read the second storyline of American Vampire, yet more Scott Snyder. It was awesome. How many vampire stories are there about the building of the Hoover Dam? Answer? One.

Finally started watching the last two Harry Potter films. Babies got in the way of seeing them in the theater, and I’m just now getting around to watching the DVDs I’ve had since Christmas.

Deathly Hallows part I was great. I don’t care what it left out of the book or whatever so don’t even start. I thought it was a great set-up for the finale, and I love how starkly mature the series has become at that point. It’s funny, thinking back to seeing the first film ten years ago and regarding it as such a great kid’s film, and now they’re not kid’s films at all. They’re fairly series dark fantasy that has effectively grown up with the kids that have watched them- and the kids that are in them. I envy kids that saw Sorceror’s Stone when they were ten and got to see Deathly Hallows when they were 19, 20 years old.

Anyway, I think it’s up there with Prisoner of Azkaban in a “best of series” contest.  The, um, departure of one of the minor characters was strangely affecting in a weird way.

Nothin’. I really need to get that tape adapter. It’s just like $1.50 at Monoprice, just too lazy to order it.