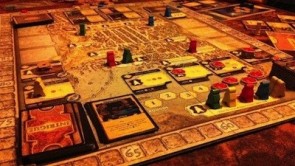 Is this the most divisive game of our time?

I was going to review Scoundrels of Skullport, but we’ve already had umpty-jillion reviews of it here on the front page so instead I decided instead to just write about the appeal of Waterdeep and why it’s managed to break away from the three month “hot game” mortality rate and remain current and widely enjoyed. Hopefully my press handlers at Wizards will be cool with not having a full-on formal review, because I’d love for them to send me the next expansion. But the capsule- a definite yes to Skullport, a must-own if you love Waterdeep. I like to play with both additions, even though it’s a touch longer.

I got some Attack Wing- I didn’t raise enough to fund my desired “whole hog” dive, so I got a starter, the Reliant, The Defiant, whatever that D7 is called, and the Negh’Var. Skipped the Romulans  and Dominion for now, the dwarf Enterprise was out of stock everywhere. Played the two scenarios  it comes with using a mix of starter and expansion components, and my early estimation is that folks saying that it “blows X-Wing out of the water” or whatever are showboating. Because it really is the same game with a few subtle differences.

That said, it feels like a slightly more refined and gently expanded version of it with some room made for some Trek elements- greater emphases on crew, missions, and smaller numbers of bigger ships. The rules tweaks are minor, and the additions are mostly great and FFG would do well to bring some of the material into X-Wing. The production is mostly garbage, as others have stated, which makes the game feel flimsy and cheap compared to X-Wing. The expansion ships are definitely nicer, I do not fucking care that the D7’s bridge is wrong or whatever and the scale, who cares. I do really like that each expansion ship comes with a one or two card scenario, which steers the game away from the kill ‘em all dogfighting that is more common in X-Wing. I also really like that I do not feel compelled to buy multiples of any ship and will be happy with one of each. Well, I did get to thinking that a big fleet of D7s would look awesome on the table…I want more, because I love Trek and it's a Trek version of X-Wing.

Level 7 [Omega Protocol] is still riding high, it’s going to get a good review. High Command…well, it’s rare that I play a game that feels like something is just wrong with it, but I get that sense from it. The pacing is totally screwed up and as a multiplayer game it’s kind of a boondoggle. I don’t dislike it and there are some cool mechanics, but every time I play it just feels off.

The Wonderful 101 pretty much single-handedly validated my decision to get another Wii U. It is freaking amazing, another great game from Hideki Kamiya and Platinum games.  It’s utterly ridiculous and completely original. It’s obviously inspired by Japanese sentai shows and maybe something like Pikmin. You (the player is #101) control a mob of crazy superheroes that have a power that’s something like a cross between a gestalt transformer and Green Lantern’s abilities. You can form up the mob into a giant sword or punching hand to beat up insane bad guys. The mechanics are completely opaque and the game explains nothing. It expects you to figure it out, which you do, and then you go back and play previous levels to improve your performance and replace that embarrassing “Consolation Trophy” with a platinum one. It’s colorful, chaotic, and gleefully esoteric in the way that Japanese games were up until the last console generation. Fans of Bayonetta, Vanquish, God Hand, and so forth, buy this game today.

20 hours into SMTIV…starting to feel a touch bored with it. But if I put it down, I’ll never get back to it.

Frank recommended something called Karate Robot Zabrogar last week, and although I can’t say that it was a good movie, it was definitely one worth watching. I really do not like Japanese comedy, because inevitably the antics and mugging of the characters pales in comparison to something like this amazing bulldog truck that shows up in the film. There’s a lot of insanity in the film that shouldn’t be spoiled. Definitely a good one to watch with a bunch of heckling friends.

Making the Halloween rounds, so watching lots of spooky flicks.

Finally watched A Band Called Death since it turned up on Netflix. It’s definitely worth watching and it’s unusually touching- particularly when the band’s kids find out about the band (pops never told them about it) so they decide to form a cover band and go out on the road and perform their album. What I really liked about it more than anything was that it was essentially the story of these three African-American brothers that really just kind of accidentally made punk rock almost because they didn’t know any better. They just played what they could and with all their hearts and what came out was sort of a proto-Bad Brains/Detroit sound. I do object somewhat to some of the comments in the film about how they predate the Ramones and all that, mainly because it’s a silly comparison. This band didn’t create punk. The Stooges, MC5, the Dolls, Velvets…all were making early punk rock before and during this band’s brief existence. What the Ramones did was something very different, very measured and structured. This was literally kids trying to emulate Alice Cooper and The Who but with an unusual passion.

Elijah Wood is in it, which is strange. I object to his title being something like “Simian Records CEO” and not “Frodo Baggins”.

Stuck on Can…but once again, I keep drifting back to the same records and unduly ignoring the other work. I did finally get a listen of the unexpected hit single “I Want More” and holy god, it’s awesome. Imagine if nerdy German dudes reared on Stockhausen decided to write a clubby song with bustling funk bass and a cocksure disco strut. And angular, repetitive guitar licks and icy keyboard stabs.

Ege Bamyasi is getting the most play lately, which is kind of weird because it’s usually Tago Mago.

Jaki Liebezeit is the best rock drummer ever.

Discuss this article
Log in to comment
Posts in discussion: Barnestorming- Why Waterdeep?, Attack Wing, Wonderful 101, Can