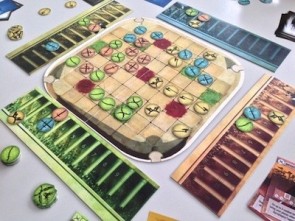 We need to talk about Tash-Kalar.

It’s actually very, very rare that I review a game I just flat-out don’t like. I screen the things I review to make sure that I’m not asking a publisher to send me something that has no chance of a good review. Tash-Kalar looked compelling. It’s Vlaada, and I like mildly abstract battle games (see also: Neuroshima Hex).

But man, I don’t think I’ve just completely un-enjoyed a game so much in quite some time. It’s just not fun in any sense of the word, and the gameplay is almost mentally painful. I think Vlaada wanted to see if he could take an extremely abstract design more in line with Go or Shogi and see if it could tell a story. Well, the helper goblin or whatever in the guidebook tells you that you have to focus on the pictures to summon them. So that should tell you something right there.

It’s dreadful, but inevitably there will be Vlaada worshippers sheepishly defending it with half-hearted grins, “it’s…uh…pretty good, isn’t it?”

I admire the experimentation, I like that he’s trying to do something other than the Big Game That Dominates the Board Gaming World for Six Months this time out. But it’s a clear misfire.

I’ve already frothed about Warhammer Diskwars. I fucking love it. It’s the 2014 Game of the Year so far. It is EXACTLY how I want to play Warhammer these days. Gotta get a second core, I really want to run two regiments both with Helblasters. I love that thing. Back in my miniatures days, I got one and painted it up and I was so excited to play with it. I might as well have just left it in the foam because the damn thing rolled over on the first shot. Likewise, my Helblaster disk did just about the exact same thing. YES!

Archipelago remains…interesting. I think Frank has a legitimate concern about its overall arbitrariness, mainly because the game can completely deny you of what you need to win through no fault of your own. This is ESPECIALLY true of the solo expansion. The crises can be brutal when there are shortages, and it feels like it’s possible to get into completely untenable situations. I really, really want to think that Boelinger is playing a joke on the Eurogame impetus for efficiency and control. He might be.

Played a couple of rounds of Dungeon Command the other day with a friend that stopped by for a visit. Man, that game is so underrated.  The combination of CCG-style gameplay and tactical placement really works…and its WAY simpler and more approachable than Mage Wars. And it’s more D&D than Summoner Wars. I think it’s best-in-class, especially after having it around for a couple of years and finding myself always wanting to get back to it. I wish that there were more sets, it sucks that the line seems to have flopped.

Crom bless PS+. Downloaded DMC (which was _great_) and Don’t Starve last night. Don’t Starve is pretty interesting, it’s definitely a Minecraft-derived survival/crafting game but it’s got a great illustrative style and a cool atmosphere. I’ve barely scratched the surface of it. It seems like there’s lots to discover. Funny thing is, I had a moment of madness last night. It was like day 4 and I kind of flipped out. I just went out and invited trouble, smashing beehives and attacking butterflies. But then I calmed down, built a camp, trapped some rabbits, and went about the business of staying alive.

Well, at least the PS4 has been turned on recently. Knocked some dust off.

Got back into Warhammer Quest, picked up all the new content. Still a great game, one of the best on the platform. The new characters are too expensive, but they’re fun to play with and the content is top notch all the way. Just got TPKed when a vampire and a bunch of skeletons decided to pop up in the middle of a big fight with some Orcs. Thanks for that, guys.

I’ve got like 150 pages left on Bone and it’s just slowed to a crawl…not that it’s not good- it’s still great- but man…the length of reading this all in one go. Going to try to finish tonight.

I think I might do ONE of the Cerebus phone books next, in this my year of the Comic Epics. Last year was all serials, this year I want to do big runs and complete volumes.

I’ve finally shown my children one of the greatest films that Western cinema has yet to produce- Pee Wee’s Big Adventure. My god, that is the funniest movie I have ever seen. When the guy brings out that giant head in the magic shop it just cracks me up every time. So many great bits, so well written.  No other film makes me as happy. I actually like Big Top Pee Wee too, but we don’t have a copy anywhere. “It’s that Pee Wee Herman, and he’s in there with MONKEYS”.

I also watched another 80s comedy picture that I had not seen since …well, the 80s. DC Cab. How did I forget that JAYNE COBB is the main character in it? Or that there was so much racist humor in it? Or that it was controversial at the time that Mr. T (Pee Wee connection- he eats Mr. T cereal in PWBA) was in an R-rated film with some pretty raunchy stuff. Or that the damn thing is a fucking JOEL SCHUMACHER film. Oh, and Gary Busey. This was one of this films that was on HBO constantly around 1985 or so.

I probably liked Jack the Giant Slayer more than I should. It’s not a good movie, really. But for some reason I enjoyed it despite the horrible lead, Ewan McGregor looking for his lost career through the whole picture, and some truly awful CGI. I like fairy tale stuff, and I liked that it was about big fucking giants. It kind of reminded me a little of Attack on Titan, actually. All told, I think I might have liked it better than The Hobbit: UJ.

I watched Dark Shadows again. What is going on.

Dark Shadows made me want to listen to “Nights in White Satin” over and over again, so I did so. What is going on.

Catching up on 2013’s top metal releases…Pitchfork (I know, I know) had a great list of the top 50 or so metal records according to the hipster contingent…but their main metal writers actually have surprisingly good taste.

The big winner was Power Trip, a Dallas-based thrash act. And I do mean thrash. These guys are classic, bullet belt crossover thrash all the way. Like old school Nuclear Assault or Leeway with a definite D-beat influence. So it’s pretty punky too. Makes me want to mosh.

Raspberry Bulbs is really good. It’s one of the guys from Bone Awl (He Who Crushes Teeth). As expected, it’s abrasive, lo-fi BM. Very raw, a little black n’ roll to it. Love the pink record cover. Of course Deafheaven had the most notable pink cover this year, and that record is amazing. Darkthrone’s latest “Turn Every Cross” is just what you want from middle-aged Fenriz…crusty punky BM more in line with Venom or Hellhammer than the more recent stuff. And funny as hell.  Agrimonia’s record is really, really good for a more traditional modern BM/DM sound. “Talion” is a GREAT track from it. Not sure what to make of In Solitude yet. Kind of reminds of Danzig, maybe a little Coroner. Pretty gothy.