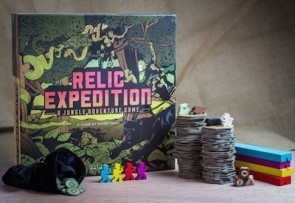 Relic Expedition is advertised as being something in the vein of Survive or Tikal, so I couldn’t resist asking Foxtrot Games for a review copy. I’m glad I did, because it is a fun family game. But the catch is that as a hobby/gamer game, it’s not going to make the cut for a lot of folks without some extensive rules additions or variants. It’s almost weird to say this, and it’s something I very rarely ever say, but there is too much randomness in the game. Random map tile draws, random equipment draws, random action points, random relic availability…and then there’s some rules-level design choices that I don’t think are quite thought out enough. If a boar knocks you down and makes you drop your stuff, there’s nothing to stop that boar from nailing you over and over again if you can’t get away. Provided, of course, the boar is rolled to move. Randomly.

But I liked this game, and it feels like some kind of lost game from Parker Brothers 1983. It does have quite a bit of Survive in it and maybe a little Goldland even with the backpacks and the equipment. There is a REALLY neat idea where when you play certain tiles it triggers the placement of large feature tiles, which are relic-rich but need equipment to explore. The game looks great with some very nice graphic work, and it’s fun to play as a family game. As a gamer game, it’s missing some things that most folks would be looking for. There are a couple of expansions that were, IMO, rather unwisely excised from the standard game because it sounds like they would add some depth and options to the game. But overall, a good one if you want an old fashioned family game. Review here.

More Thunder Alley, which I completely love. It does get a little slow with more than four because, as BFkiller noted in the forums today, you’re looking at a board state that changes every turn. Your cars may be in a completely different situation by the time you get to play. This means your hand of cards suddenly has different value, which can cause a little AP. You really can’t plan to play a certain card ahead of time. With four players, there is more control and you can forecast more accurately. It’s still REALLY fun with six (we didn’t have a seventh) and it’s super competitive, but I would say to avoid that many if you don’t want a really wild and wooly tactical game.

I’ve got a couple of forlorn and forgotten FFG Euros on the way, Deadwood (recommended by Von Tush) and Black Gold, the reprint of a bona fide ERP candidate, Giganten. We’ll see how these pan out.

Missed a copy of Manhattan from Canada for $30…I backed off the bidding because the shipping would probably put it out of my “willing to pay” range.

For some reason I got really nostalgic about when I used to turn on the PS4 and wonder if there was ever going to be any good games on it. My PS+ had expired, so I re-upped it and picked up the recent Strider remake. I LOVED the Genesis Strider, I think I may have played it more than any other Genesis game. I remember buying it at Software Etc. and it was a big deal because it was the first 8 MEGABYTE cartridge and it was an absurd $59.99. But it was so freaking cool…Russian politicians forming up into a giant robot snake, mechanical gorillas, flashing swords, grappling hooks, etc. The new version is pretty fun- very fast-paced and smooth playing and there are some subtle callbacks to the original game. I’ve only played for about two hours but so far so good. Especially for free.

I also started up Ocarina of Time 3D. Last time I tried it, I couldn’t get into it again. This time I’m really into it, heading to Death Mountain this afternoon. It is a really great game- somewhat overrated by people that played it when they were little, I think, but there’s so much charm and warmth in it that it’s irresistible. I still like Wind Waker better though.

I started having dreams about World of Tanks: Blitz. I finally got my T-34, which rules, and the Hetzer, which is slow and stupid.

I am really hitting the pay-or-grind wall though…the tier V and up tanks are SO FREAKING EXPENSIVE. But with that said, the game is really well balanced and so far I’ve not really felt outgunned or overmatched. It’s actually kind of exciting to run into a higher tier tank with impenetrable armor and 1000+ HP. Bug out, or blast ‘em?

I got in the mood for some more turn-based tank action so I picked up one of those Hunted Cow hex-based wargames, the Eastfront 1941 one. It’s pretty fun, extremely simple. May put Battle Academy back on the iPad.

I finally watched the Phase IV DVD I bought something like six years ago.

I am completely obsessed with this movie. It is the only feature film that Saul Bass (see: just about every awesome credit sequence ever) directed and it makes me wish that he had done more. It has a very specific, very unique atmosphere that is chilling, mysterious and completely enveloping with the right sound design, music, visuals and a HUGE degree of telling rather than showing. The direction is unusually visual (well, not unusually for Bass), and the insect photography is inspired. The scoring is mostly electronic.

A vaguely explained cosmic event happens in some really kind of Lovecraftian diary entries delivered in narration. Macro photography of ants- which goes on for like eight minutes- explains that something about ants on earth has changed and they’ve become incredibly intelligent, building geometric structures and crop circles (fun note- this was the very first time that crop circles appeared ANYWHERE, and it was two years later that this supposed phenomena started happening IRL). Two scientists are dispatched to figure out what the hell is going on, stationed in a geodesic dome. What ensues is almost a psychological war between men and ants.

But there’s more to it than that. I won’t spoil the end, but it swings for fences at the same distance as 2001 or Solaris, but at a smaller scale. It isn’t just that ants got smart. It’s that the entire balance of nature has changed. There was a much more surreal, extended ending cut by the studio, you can see a phone camera recording of it from the one time it was screened a couple of years ago.

A really, really great film that embodies the best of 1970s science fiction cinema. It’s a damn shame that a lot of folks will have only seen this film through stupid ass MST3K.

Watched The Strain premiere. I dunno. There are some things I really like in it, and some things I really hate. The good things are obviously the vampires, the worms and the ersatz Van Helsing vampire hunter. There’s some fun, unexpectedly campy gross-out stuff. I like that it’s old-world gothic. But the characters- especially the CDC guy- are FUCKING HORRIBLE. Talk about having ZERO personality or compelling characteristics. It doesn’t help that we’re more or less introduced to him through a ten minute MARRIAGE COUNSELING session in a VAMPIRE SHOW. I do not fucking care one iota about marital squabbling in a SHOW ABOUT VAMPIRES. What a waste of screen time. The writing in general is almost embarrassingly bad, especially the Latino gang guys. Did Del Toro really write that? That is about the most stereotypical  “white people writing a minority” writing I’ve ever seen. But then there were some cool scenes like the morgue and the little girl at the end. I’ll keep watching, but the show is on thin ice.

I’ve also been watching the Star Trek animated series…I had never really seen much of it, I’ve been pretty surprised at how good it is. The shows are like shorter episodes. It helps a lot that the actual cast of the live action show does the voices. I also like that some of the episodes are able to go bigger in scale or show things that the live action show wasn’t able to due to limitations. Fun stuff.

I haven’t really listened to much of Peter Murphy’s solo work since…I dunno, 1995 or so? Not that what I’ve heard was bad, it just never really grabbed me beyond, obviously, that voice. But his new record, Lion, was produced and co-written by Youth (Killing Joke) who also plays on it so that got my attention. It was also apparently written and recorded in a week so I wanted to check it out.

It’s alright, it’s definitely the most aggressive thing he’s done since Bauhaus and the playing and production are really top notch. His voice is in extremely fine form and he’s going for the kind of yelps and histrionic straining he hasn’t done since Bauhaus. One track directly skewers his goth-god status and lyrics quote Bauhaus tracks- an interesting piece of self-deprecation. There’s a couple of standouts, like “The Ghost of Shokan Lake” and “Eliza” but as a whole it feels…unsurprisingly…like a record written and recorded in a week by old time post-punk guys. So it sounds slightly out of touch (read: like something from the mid-1990s) and at times plodding, looking for hooks to hang the singing and arrangements on. At its worst, it sounds not too far removed from Killing Joke’s mid-1990s stuff without the phony Middle Eastern tinges and less metal. At its best, it sounds like he’s doing the usual Bowie thing but with a renewed vigor. He’s still one of my favorite singers of all time, regardless.

I’ll never forget hearing that voice sing “Bela Lugosi’s Dead” for the first time, on a cassette tape played through this crappy Aiwa stereo that I had.