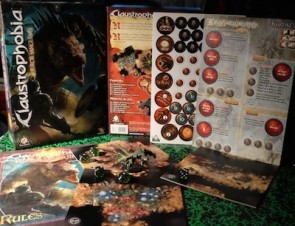 Got room for just one battlesaur?

You know, the funny thing about reviewing games is that a lot of times, what you wind up capturing in a review is not just opinions on a game or its design but also where you are as a player when you are playing it during a review period. I am not of the opinion that a review is somehow a final statement about a game- witness the times that I’ve changed my mind almost 180 degrees on things like Lord of the Rings and El Grande. Because games are so ephemeral and dependent on the shared act of effectively transmuting rules and structures of play into narrative and decision matrices, I don’t know if even the best games writer can ever hope to “permanently” nail down what a game is or what its best qualities are.

So I think it can happen- especially over a long period of time- that you can look back and really see where games may have been over or under rated- at least in terms of the longview. Claustrophobia got a good review from me when it came out in 2009, but I still think it may be the one case where I dramatically underrated a game because of where my personal expectations were at the time. I wanted variety and complexity at the time, and I felt like the game was lacking both even though I liked the design and setting. It wasn’t but a couple of years later- after I had traded my copy away- that I realized that the game was doing so much more with so much less than what other dungeon crawlers were offering.

Now, five years on, I would probably call Claustrophobia one of the best games of the past decade and it is a dungeoncrawler on par with Space Hulk and the D&DAS titles- in other words, one of the best of the best. It’s funny though, the game really has more in common with Sorcerer’s Cave or Mystic Wood than anything post-Heroquest.

So, here’s kind of a retro-view along with a review of Furor Sanguinis, the new expansion. Yes, if you have Claustrophobia you should get it. It’s awesome, albeit a little expensive.

Not much new happening on the tables around these parts. Copious amounts of Heroscape, played almost daily with the kids but that’s about it. Hellfire Club is on hiatus for a few weeks. Haven’t really solo’d much or had friends over. Haven’t even got the new X-Wing ships yet.  Doldrums. Hopefully Imperial Assault will come along and inject some gaming energy.

It’s obviously a must-have for Wii U owners and it is probably the best game in the series overall. The fighting mechanics are almost supernaturally well-designed. I would almost be willing to call it the best fighting game ever made…there’s so much depth in so little mechanics, and without the need for things like rote combo memorization, frame counting and all of that esoteric crap. A four player battle is very different than a two player battle, and all of the game modes offer so many different ways to enjoy the accessible mechanics- and that’s before you figure in customizing Mii fighters and designing stages.

The only disappointment is, ironically, the board game mode. It’s not as good as the quest mode in the 3DS version and it definitely is not a good substitute for Subspace Emissary, the solo adventure from Brawl. The mechanics are kind of weird, and it sort of shoves the fighting action to the side for this silly tabletop simulacrum with a goofy, simultaneous roll-and-move scheme. Would that an actual board game designer made this…

It’s a small thing though, because there’s just so much else to enjoy.

I also dusted off Destiny, starting over with a new character. I was pretty frustrated with my level 23 Warlock…I never get any Legendary stuff, so I rarely make any progress

Still a no on Binding of Isaac. Just do not like that game.

Sort of went bananas what with all the sales and so forth going- lots of new stuff.

Arcane Quest 2 is the game you want if you are looking for Heroquest IOS. There were some other attempts to do a Heroquest-like game, but this is the one. It’s REALLY like Heroquest, with some minor changes. Overall, it’s very good for $1.99- obviously not as polished and expensive-looking as WHQ, but I think it makes a fine alternative. Get it before GW gets litigious.

Banner Saga was half price, I’ve just played about 30 minutes of it but it looks awesome. It’s an SRPG with a REALLY cool animation style- very much like some forgotten 1980s animated movie. Some cool mechanics…will have to look into it more.

Trouble with Robots is decent but I’m already kind of getting tired of it. You have a very small deck of cards that summon various fantasy creatures and buffs to fight robots in real time. It’s one of those games that feel like a lot of watching.

Battlelore Command impresses at first, but it soon turns out to be a pretty badly designed app. It’s “mostly” Battlelore 2nd edition, but they’ve managed to clutter it up with bells and whistles to the point where I feel like it’s barely enjoyable. For example, why does the camera have to pan around to show the battles…it’s already disorienting enough with all of this janky-looking 3D terrain in the way of everything.  Units look terrible, card text is microscopic on the phone, and it just overall feels cluttered and poorly implemented. Simple things like not being able to save in the middle of a campaign game (really?) and limited interface options make it feel cheap. Gameplay wise, it also feels really out of whack in terms of balance. The Ulan Bukuckookucks or whatever the hell they are seem WAY more powerful  than the token humans. I dunno, I liked it at first through the tutorial, but after playing it more intently I think there were some iffy choices made in the execution.

Knightmare Tower is pretty good though, for a pick-up-and-play skill game. Wicked Lair is kind of a tower defense thing where you build dungeon levels and populate them with monsters, it seems like it might be worth a look.

Toy Story that Time Forgot was awesome, probably the best of the Toy Story shorts/specials. The Battlesaurs were great, what a fun satire of boys' action figures. Would have loved to see those guys team up with Combat Carl.

Still obsessed with the Riddick movies…an obsession that will probably come to a crashing halt next week when I get Guardians of the Galaxy.

Finally watched Riddick, last year’s entry…what a piece of trash! And I mean that in a very good way! It was total JUNK in the way that 1980s science fiction and fantasy movies often were-essentially exploitation movies with only slightly higher budgets than their grindhouse predecessors. It’s clearly a smaller scale film than Chronicles, in no small part due to it effectively being a Twohy/Diesel bankrolled production. It looks cheap- some of the FX shots are just atrocious. But I kind of didn’t mind, because the film had a ragged shamelessness that I really loved. It’s not afraid to be pulp, and it’s not trying to be anything other than a tough guy movie INNNN SPAAAAACE. The first part is great- Riddick surviving on a hostile planet, almost wordlessly. Totally a Conan thing, and with plenty of levity- like the giant monster turkey leg Riddick eats.

Then the mercenaries show up, a bunch of jerks including Katee Sackhoff. Riddick clowns them out, talks tough, and winds up helping them fight off the mud scorpion monster things.  Totally ridiculous, and if you take it too seriously it just looks like a bunch of nonsense. But if you take it like you would a sub-John Carpenter level genre film circa 1982, it works. This shit ain’t supposed to be on par with 2001.

Ironically, last night I watched The Black Stallion- a movie I had never seen before. Dang, it was really awesome. But…I kept thinking of how the boy and the Black on the island were a lot like Riddick and the dingo-dongo on the planet.

I don’t care what you think, but I have also been watching some Jem and the Holograms. I love Jem and the Holograms, I always have.  My friends in school back in ’86 didn’t understand since it was ostensibly a girls’ show, so I’m used to your ire. The one I watched last night was especially powerful. Riot, the lion-maned singer of the Stingers, went home to his folks to show his new record. His army dad got mad and threw it in the pool and his mom suddenly got sick from some unexplained illness.  Then he relates a touching story about he left the army to form the Stingers and his dad disowned him to Jem. So it was up to Jem to convince father and son to reconcile and save the mother’s life. HEAVY stuff.

In the other episode I watched, Minx tried to seduce Rio with synthesizer diagrams and Jem used Synergy to turn into a surfboard.

Rolling out the Christmas music, which of course means that it’s time for the Phil Spector Christmas Album.

That and a bunch of new romantic stuff- Ultravox and Japan in particular. Must be all of the hair and makeup from Jem rubbing off.

Discuss this article
Log in to comment
Posts in discussion: Barnestorming- Claustrophobia/Furor Sanguinis in Review, Smash, Riddick, Jem and the Holograms