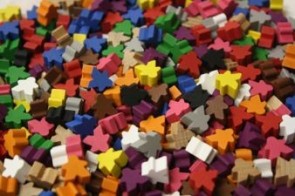 This week's companion piece is a list of my five favourite games in my least favourite genre. Yep, that's right, it's Worker Placement time. You can see the results of my ruminations over at Rollin' Dice.

Perhaps the most interesting thing I discovered while compiling the list is how badly lots of randomness fits into the mechanic. Normally, tons of dice or cards is a fine addition to any game and, indeed, some of my picks showcase how well they can work in Worker Placement. But raw chaos and aggression alongside heavy strategy just doesn't sit well for me. Too much chalk with too much cheese. Or perhaps too much milk with too many pickles.

Why am I back to compiling listcicles? Because it's been a long time since I was really excited by a board game new release. I can't even muster any enthusiasm for Warhammer Quest: Silver Tower, not when I've got Descent, DungeonQuest, Mage Knight, the Adventure System and lord knows how many other fantasy adventure games kicking around already. Instead, we're still have tons of fun with Automobiles and X-Wing. There will be a review of the latest wave coming soon, but other than that, I'm content with what I have.

Sometimes though, even when you're immersed in ennui, something can come along and jerk you out of your torpor. That happened recently when I got given a copy of Twilight Squabble via its designer, who lives near me. It's a tiny thing, just a small deck of cards and a few cubes, and it's got nothing to do with its Struggle namesake, except for a cold war theme. But there's a surprising amount crammed into that little box.

At first glance, it's a simple bluffing game. Each turn you get three cards valued at 1, 2 and 3. You play two face down, one on the "space race" and the other on "balance of power". Highest card wins, except you can use your third card to either counter an enemy card or buy bonus points to allocate the following round. There's also an Agent you can use to find out what card your opponent has played. After a few rounds, highest balance of power wins, with ties settled by the space race, unless one side has accumulated two much power and started a nuclear war for an instant loss.

On first play, it turns out to be surprisingly convoluted. You need to read and stick to the rules very closely, and there's a lot of mechanical elements which don't serve an immediately obvious purpose. Halfway through the first hand of this supposedly short game, with flip of the rulebook on every play, I was ready to give it up as rubbish. But once we got the hang of things and the game flowed, it proved both fast and fun.

The cleverness in the game is the way it marries bluff with probability. We encountered several points when, in spite of the hidden information element, there was a "right" and a "wrong" play and making a bad call had the potential to lose you the game. If you're ahead on the balance of power, for instance, failing to negate one of your own cards with your own cubes (which you can do) can mean instant armageddon.

I was also atrociously bad at it. So, if you fancy an unusually quick and deep bluffing game for two, or just a game you can beat me at if we ever meet, it's worth checking out.

wkover replied the topic: #228683 06 Jun 2016 17:40
Is randomness why Age of Empires III (now Empires: Age of Discovery) isn't on your list? That's my favorite WP game by far, even if it can have degenerate building strategies.

The randomness of the Discovery action turns some people off, I know.

And Dungeon Lords is at least thematically interesting, even if it's still just a worker placement game. Interesting enough to play occasionally, if not to purchase/keep.

Sevej replied the topic: #228687 06 Jun 2016 20:24
At first I enjoyed Agricola's decks, but now after Farmers of the Moor I find myself only using the improvements from the expansion. They keep things interesting without being too thinky.

I really need to play Lords of Waterdeep...

san il defanso replied the topic: #228767 09 Jun 2016 10:04
Your WP list is pretty solid overall, but after several years I've decided that I'm just not that into Alien Frontiers. First of all, in the half-dozen games I've played, it has always gone about 30-45 minutes too long. This is with all kinds of players, even fast ones. Secondly, I really feel like the winner isn't necessarily tied to the performance on the board. Pretty much everyone is within a point or so of each other until the game ends. Maybe a better way to put it is that I don't feel like I can really fail. No matter what I do the game is close and I sometimes win. I don't have as much experience as others do with it, but it just doesn't do much for me.

I like Lords of Waterdeep, but I did eventually let it go. First of all, it just doesn't get played too much. A light worker placement game isn't a design space that needs occupied for me. For casual gamers I will always have something that will be more appealing, and for more dedicated hobbyists there's always something more complex and interesting for them. Secondly, I know a lot of people who own it. So I flipped it for something else. Still a really good game though, especially with the expansion.

I'm glad you also recognize Agricola's quality. Not that everyone is going to dig how it plays, but it really does feel tied to its theme. I'm curious how the "Revised Edition" will pan out, though I never thought the "imbalance" of the cards was a deal breaker. Quite the opposite actually.

Have you played Argent: The Consortium yet? That's a terrific implementation of worker placement. It has such interaction and theme that it's hard to go back to how things were before. Just an outstanding game.

JEM replied the topic: #228773 09 Jun 2016 10:25
My experience with Alien Frontiers was pretty depressing. I was unable, for the entire game, to roll the doubles or whatever you needed to get additional dice except on the first turn, before which another player had stolen the resource I needed. I was told there were cards that could be acquired to help with the situation, but I was on the back foot for the entire game- even hunting down those cards would have been two-three turns effectively wasted.

Of course, with the end-game being so long there's a built in catch-up mechanism which suggests you can amble along at a leisurely pace while the leaders all fail to win, but the frustration with the randomness had already spoiled the game for me. I'll be happy to never see the game again. Still, I'd rather watch paint dry than play Lords of Waterdeep too. I think there's something about the smugly passive-aggressive nature of most WP games combined with the typically turn-order/mechanical/maths based screwage* that just irks me.

As great as Argent is, I think it may fall within that scope of random/confrontation elements that Matt was avoiding.

*There's something like a sine wave of action potential in turns orders in many of these games. Eg, starting as 2nd player in a typical clockwise rotation, if 1st player is up for grabs, means you're always going to be 2nd or 3rd if 1st and 4th are always alternating between them using actions to take 1st, which means you're never really in the hole, and never have to expend actions to get out of it.
Read More...