You Should Be Playing Warhammer: Champions 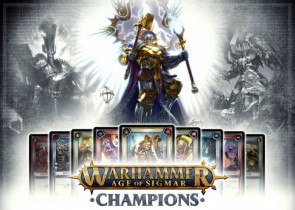 The digital version of Play Fusion's Warhammer: Champions card game is out now and if you aren't playing this card battler either on your device or your table you are sleeping on one of the best CCG designs I've seen in many years. I was sent all four of the Campaign decks and a box of boosters ahead of launch and I've been enjoying the game face to face and as part of the Beta release but now, with most of my cards scanned in to the app I'm eager to see how this game hits the larger market. As history shows, a CCG lives and dies by its player base and I'm hoping this game finds its audience because it is quite unique and sets itself apart from other games in its class in several ways.

The gameplay format looks familar at first glance. Decks consist of four Champion cards, each representing a hero or leader of your chosen faction. Each hero is set up in a lane with a face-down Blessing card, which you also select as part of the deckbuilding. On your turn, you play unit and spell cards into the lanes corresponding to the Champions, with each able to control only one card barring special abilities that allow, for example, Orruks to gather en masse. The goal of the game is to use these units and spells to knock the other player's life down to zero.

Pretty standard stuff, really. But it gets interesting. For one thing, you are never going to be "mana screwed" in this game or prevented from playing a card. Any card can be played on any turn with the only restriction being that some cards are keyed to Wizard or Warrior Champion types. There are no resources other than a two play limit on your turn and a restriction on . You can forgo one or two of these actions to draw, which is the only way to build a hand. So the decision to play, hold, or draw can be a tough one. For another, most unit and spell cards work on a kind of timer. Each turn, they rotate to the next corner and this may trigger damage, healing, or other effects. This means that some units may get stronger while others come in at peak level and taper off. Others may block damage on some corners while dealing damage on others. Powerful spells may take a couple of turns to spool up. This opens up a lot of variety in unit functions, especially when coupled with other abilities such as card removal, bonus draws, and forced discards. It also creates some very compelling timing puzzles as you work out the best time to play something or execute a counter before a card reaches its full potential.

On top of these crazy rotating unit and spell cards, the Champions also turn but it is a different mechanic. Each corner of a Champion card represents a Quest. This might mean playing a unit card, dealing damage, or using a one-shot ability card. When a Quest is fulfilled, the card turns and when the rotation comes full circle, the Champion's Blessing is unlocked. These tend to be very powerful cards specifically geared toward mid- to late- game utility. These Quests add another interesting layer to the card play, as you may find yourself trying to play the right cards to get to a blessing quickly or being forced to decide whether it is worthwhile to lock up a Champion's slot with a card that may delay further questing.

Most CCGs, in one way or another, are like Magic. More recently, it could also be said that most CCGs are like Hearthstone. But Champions isn't like either. The gameplay just isn't like these landmark titles at all. Units only deal direct damage, there is nothing of the standard fare creature face-offs and trade-offs that are part and parcel of those games. It is all about using these timers, manipulating them, and keeping pace with your opponent's ability to deal damage by mitigating it or outstripping it. Sure, you'll still run into situations where you just can't draw a situationally useful card, but the game feels more strategic on the table as opposed to in the deckbuilding process. The game is build on the Lightseekers chassis, an earlier Play Fusion design that has earned a small but dedicated player base.

I'm completely taken by this game and I love the ability to play it on a mobile device with my physical card collection scanned in an available for play there. The app is excellent with a high quality interface for gameplay and collection management and matchmaking so far has been quick and without any kind of fuss. It is free to play, so you can expect the usual booster purchases and daily/weekly missions to earn extra currency to buy things if you don't want to spend real money. On the table, I've found it especially pleasing that the game plays with the Campaign decks more or less like a standalone game. The friends I've introduced it to have felt satisfied with the preconstructed decks, and I think many players will find plenty of game there without ever buying a booster pack.

And above it all, it's Warhammer. This is the first licensed game to leverage the Age of Sigmar setting, and I'm very pleased to see Tzeentch Daemons battling it out with Idoneth Deepkin or Stormcast squaring off with Flesheater Courts. The illustrations are top notch, the graphic design is excellent, and the card quality is superb- the subtly embossed and textured card backs make this feel like a premium product befitting of its IP.

My code is JRP-VRZ-GP. If you get stuck in, add me to your list. Easy wins are guaranteed, because I'm just as bad at this game as I am at any other CCG.

Review materials provided by Play Fusion and Warhammer Community. We do not accept payment of any kind from publishers or designers for reviews or other coverage.

Hadik replied the topic: #281619 14 Sep 2018 14:34
Got a demo of this at the GW store and it looked cool. Unfortunately it is completely sold out everywhere. I will check out the ios version. Thanks for the tip.

Jexik replied the topic: #281627 14 Sep 2018 15:14
When you say Lightbringers, I think you mean Lightseekers? But yeah, the rotating cards things sounds very much like that game. It looked like a Skylanders or WoW game without the license.

stormseeker75 replied the topic: #281701 16 Sep 2018 09:21
If anyone is looking for singles, I have a bevy of cards for sale. I could probably even cobble together some starter decks if you guys wanted.