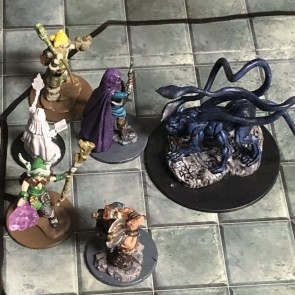 One Summer Can Change Everything

They were caught in the Black Spider’s Drowish web of deceit, lies, and trickery. Fighting their way through Wave Echo Cave (while relieving a Gazer of its duties and parlaying with a Wraith along the way), the party had finally reached the “boss fight” of the Lost Mines of Phandelver campaign. And, in fact, the end of River and Scarlett’s very first D&D adventure. So I wasn’t going to let them off easy, and I pulled out all of the stops to make it an epic fight to the finish.

When they reached the Black Spider’s room, they were shocked to find that the villain that had been built up for the entire campaign approached them apologetically, insisting that there had been a grave misunderstanding and that he had been working with the missing Rockseeker brothers in secret to clear out the mines and ready them to reopen. To augment this deception, I had a doppleganger (the concept of which I had already introduced earlier) appear with the Black Spider. And so the hapless party led the Black Spider right to the Forge of Spells, which they had already found. Of course, there the veil was lifted and battle was engaged.

It was a tremendous encounter that ended with the Black Spider casting Invisibility, attempting to escape the room. After a couple of wild swings near the door, it dawned on Ivy to cast Detect Magic…which was able to determine the location of the spider staff our villain was holding. Sprax finished him off with a swing of his Flame Blade. The kids cheered and there were hugs and high-fives. Daddy’s allergies must have been acting up or something.

I kind of couldn’t believe they made it to the end – I was afraid the entire campaign that they’d lose interest in it, or want to fall back to playing a bunch of board games instead of focusing on one game. I thought they might get bored with the story or not follow it. I suppose a lot of these feelings aren’t exclusive to gaming with children and are really just standard DM insecurities. These were also amplified, undoubtedly, by the fact that it had been over 15 years since the last time I ran any kind of roleplaying game.

I was also surprised that their enthusiasm to play didn’t end with the Black Spider. In fact, they were already excited not only for their next adventure (which I had already told them was going to be Storm King’s Thunder), they were already thinking ahead beyond that to a whole new campaign which they decided for themselves should be Tomb of Annihilation. They are already drawing up new characters (a Dragonborn Paladin and a Tabaxi Sorceress) for games we may not be playing until Christmastime.

But more immediately, I found myself trying to figure out how to link their adventures in and around Phandalin to the more northerly frontier adventures of Storm King’s Thunder. Scarlett had said that she wanted to do something involving horses, so I concocted a transitional story that would put them in Triboar, one of the three towns where the events of Storm King’s Thunder kick off in earnest. It’s a sordid tale where a drifter called Agatha Grool takes up stable work in the equestrian community and one of the ranchers falls in love with her. It turned out that she was actually a hag, and made a deal with the rancher to curse the livestock of the other ranches. But being a hag, she really just wanted to cause as much corruption and misery as possible so it wound up affecting all of the horses. So all of the horses have come down with an ailment called Black Fly Fever, which causes festering boils that erupt into maggots that quickly grow in to big, greasy black flies. My kids HATED this. They called me “disgusting” for coming up with it.

But it also motivated them and cast the situation in a dire and desperate light. So the Emerald Enclave called for the heroes of Phandalin to head to Triboar to take a look, and there they learned of some magic apples from a Gulthias Tree that would cure the horses. Essentially, I used some of the story and elements from The Sunless Citadel adventure, found in the Tales From the Yawning Portal compilation. It all just sort of fit together as an interlude, and it put them on a pretty Druid-y quest as the main antagonist is an outcast Druid himself.

So the stage is set to continue on, and I couldn’t be happier. Over the past several years, as the current board game industry and my interest in most of its products have drifted further and further apart, I’ve gone through a process of reconnecting with things that I effectively “lost” by focusing on the board games format during its ascendancy throughout the 2000s. It started with rekindling my interest in classic, pre-Princes of Florence Eurogames concurrent with my declining interest in the increasingly repetitive, redundant, and boring “Ameritrash” genre. Then I found myself back in Warhammer and miniature gaming, and reveled in attending events where nobody gave a shit what the BGG “Hotness” was, and everyone was there to play the same game. I found myself back at Magic: The Gathering, wholly enjoying casual play and regretting wasting so much time playing LCGs and other games that were to whatever degree “like” Magic.