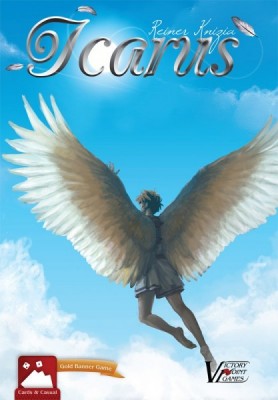 A new card game from Reiner Knizia will be winging its way to you this summer from Victory Point Games.

Now available for pre-order! Please note that any orders placed which include this game will not ship until the release date (est. 30 July).

A new card game from Reiner Knizia will be winging its way to you this summer. Dubbed Icarus, it is a game for three to seven players who must don their wax-fastened wings to see who can soar the highest without being caught flying too close to the sun.

Icarus players draw one card each from seven different-colored decks and must bid an amount of one of those colors which they believe is less than the sum of every player's card in that color. At some point bids, which must increase with each player, will reach so high that they are challenged! With a handy game mat and additional play variations included from the developers at Victory Point Games, we're sure that Icarus will find a happy landing among your gaming group!

How high can you fly?

Note: This game is currently only available in the boxed version.

What's In The Box?