The Tyranny of Choice 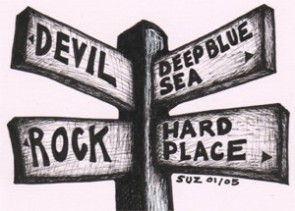 My little girl, age three, seems to be neither more or less interested in playing structured games than any other three year old. She likes to get my “grown up” game off the shelf and play with the pieces though - recently a couple of cavalry pieces from Battles of the Third Age became horsies and a board of Helms’ Deep became a fair. But I digress. Recently I played two games with her in consecutive days that made me think, very hard, about an aspect of game design which has become so sacrosanct as to be almost a religious commandment: the need for a game of any length to present the players with “meaningful choice” in order to be a good design.

We’ll return to gaming with a three-year old later. First we’re going to take a good look at the concept of “meaningful choice”. On the face of it, the need for this to be incorporated into a strategy game design seems stupidly obvious. The very word “strategy” game means that in order to fit in to that hallowed category the player must be able to make decisions about the play which, if good, boost his chances of winning or, if poor, reduce those chances. When I first heard this term, way back when, it seemed to patently obvious that I accepted it without question. In all my years of gaming since then I’ve treated it as the basic yardstick by which you judge a game. It doesn’t matter to me if a game is very random, or very complex, or very chaotic or takes a while to play. As long as there is some sizeable element of meaningful control by which the choices a player makes impact directly on his chances of winning then the game just about passes muster as a game I’ll play, even if I have to play it under duress.

As far as I can see this has always been the reason why games such as Talisman attract such a sizable amount of hate. I’m not a massive fan of the game. It irks me that however good a story the game can weave together I have pretty minimal control over what’s happening to my on-board proxy. I don’t hate the game myself - I’ll play it for the fun narrative - but I can understand exactly where the haters are coming from. Stick in some meaningful choice into the game - as designers have done in titles like Return of the Heroes and Prophecy and you’ll get a better game, right? Well, funnily enough I’ve played a number of those ”Talisman but with added meaningful choice” games and for the most part they’re fun but no, they’re not particularly better than the venerable old classic which clearly inspired them. There are lots of reasons why you might prefer one game over another - theme, length, mechanics - but in this case these are all pretty comparable to Talisman and I do like the idea of a fantasy adventure game. So why didn’t the addition of meaningful choice make it better?

On the flipside we have almost entirely non-random games like Dune in which virtually every decision smacks of meaningful choice. When I first read about Dune it seemed I had found gaming nirvana: here was a title that allowed me to do all my favourite things like plot, backstab and sweep across the board with huge armies of ululating warriors and yet had done away with such frivolities as dice and packed the often unreliable “dudes on a map” genre with a gargantuan helping of meaningful choice. It took me a long time between reading about the game and getting to play it, and when I finally did so I got a nasty shock. It’s a very good game indeed, but I found the sheer amount of hidden information in the game frustrating. There was no randomness in the mechanics but the paranoia-inducing manner in which the game feeds different tidbits of information about the game-state to individual players but allows no-one to know the whole story meant that none of the decisions I was making weren’t as meaningful as I’d hoped. I was guessing, operating in the dark. Here was a game in which the supposed panacea of adding more meaningful choice hadn’t actually managed to automatically elevate the game above its peers at the top of the diplomatic wargame genre.

These sorts of ideas had been slouching around in my head as they tend to do until one weekend when I played some games against my daughter. First of all we played a game called Crazy Chefs which is about her favourite game in the world. It’s a simple memory/set collection affair where you lay a bunch of ingredient tiles face down, mix them up and then select them one by one trying to collect the ingredients you need to make a dish. She loves the surprise of turning the tiles over. Then we played The Very Hungry Caterpillar Game which is one of the most lamentable games it has ever been my misfortune to encounter. You spin a spinner and move and that’s pretty much it only it managed to be worse than all the other childrens’ roll-and-move games you know because the presentation is shoddy, the rules unclear and there’s a nasty gotcha space at the end which will either traumatize your child or make the game pointless depending on how you interpret the rules. She played half a game of that and then got up and did something else instead. Even she thought it was boring.

And that’s when it hit me. We both like Crazy Chefs and I had a fun time playing it against her even though its clearly aimed at people one-tenth of my age. We both thought The Very Hungry Caterpillar Game was dull even though it too is clearly marketed at young children. What’s the difference? Choice. Not choice which is meaningful in any way, shape or form but simply choice. In Crazy Chefs we get a choice: we get to choose which tile to flip and even though the game is entirely random and the choice meaningless the act of making it alone involves us both in the game. We’re there. We’re chefs trying desperately to be the first to gather the food together to feed our hungry customers. In the other game, the name of which I can no longer be bothered even to cut and paste, there is no choice and we are merely observers of the course the arbitrary nature of the game forces us to take. This is boring, even for a three year old.

So the answer to the conundrum over meaningful choice is that it’s overrated. Choice alone is enough, just, to make a satisfying game so long as it’s combined with other ingredients such as variety, or a good story, or the simple pleasure of enjoying a game with your offspring. When viewed in this way a lot of seemingly mysterious opinions about games become clear. Why is it, for example, that gamers are generally very tolerant indeed of high randomness and lack of “meaningful choice” when it comes to short games but still find something like LCR appallingly dull, even though it offers no more strategy and takes no longer to play than any number of quick push-your-luck type games? Because it offers no choice and thus excludes you from the game. Why is it that out of two games which are effectively about telling stories, Tales of the Arabian Nights is adored and The Ungame is reviled? Because the former offers choice and the latter offers none. None of it is that simple of course - in the latter coupling we’re putting up a richly-themed game against a feeble attempt at cashing in on parents worrying about sibling rivalry but nevertheless I don’t doubt that the choice factor partly explains the vast gulf in opinions about these games. And of course it explains why people continue to play and love Talisman over any number of supposedly more modern clones that offer players more strategy: because the act of choice itself is all that really matters.

The reason for this is because “meaningful” can actually apply to a number of different aspects of game play. When the phrase is trotted out it is universally taken as meaning strategic choice, but an in-game choice can be meaningful in other ways. Let’s go back to Talisman again for an example. Imagine that I’m trying to reach the City space but I’m on the other side of the board in a position where one direction is slightly, but not a lot, nearer to the City than the other. When I roll and make a choice about what direction I want to move in, I’ll take the one which is nearer the City every time. In reality of course, given the random nature of movement in Talisman and, perhaps more importantly, the need to roll an exact number to hit the space I need, the choice is strategically empty: the point at which I reach my goal will almost certainly be determined by the dice, not by the direction in which I choose to go. But as a player I feel like I’ve made an important choice because the game is telling a story, and in that story the protagonist wishes to go to the City and so I have made the only choice I can which fits the tale that is emerging from the game. There is another important aspect here which is that the choice also carries the illusion of meaning: the shorter route does in fact increase my chances of reaching the City faster but by such a tiny margin as to be effectively meaningless. But because the focus of the game is on the fun and the narrative rather than the strategy, that choice takes on a greater significance than it actually has. Don’t underestimate this effect: in many multi-player conflict games which are full of apparently strategic choice your actions can be completely torpedoed when another player makes an unexpected decision and this can happen multiple times in a game such as the example I offered earlier of Dune.

Lest anyone be mistaken, let’s be clear: I’m not suggesting that strategic choice is a bad thing. Merely that it’s overrated and that if other aspects of a game design are good enough a simple act of choice is really quite enough to make a game very good indeed. It seems to me that the constant use of “meaningful choice” has become a tyranny, an unconscious, widely-accepted and rarely questioned driver toward creating ever more “strategic” games when the concept isn’t actually a pre-requisite for making a successful or entertaining game. It’s amazing how just having to make a choice is enough of a starting point to draw players into the game, make them feel like they’re involved in what’s going on rather than mere spectators. I’ve stopped being so bothered about “meaningful” choice and become, simply, pro-choice. Won’t you join me?

Matt is the founder of Fortress: Ameritrash. He is also a regular columnist for Board Game News.

Click here for more board game articles by Matt.