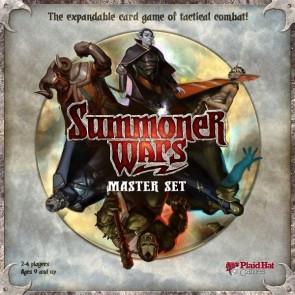 Hot on the heels of the re-aquisition of Plaid Hat Gamers, Colby Dauch announced the possiblility of a new edition of Summoner Wars. To celebrate, we are taking a look back at this game.

Summoner Wars: Master Set, a tabletop miniature game played with cards instead of mini figures, was originally released in 2011. It recieved our Reader's Choice Award for best 2-player game for 2011, and made Ken B.'s Top 5 Games of 2011 list.

But how do people feel about Summoner War's in 2020? Do you love it or hate it? Do you still play it?

Discuss this article
Log in to comment
Posts in discussion: Flashback Friday - Summoner Wars - Love It or Hate It?

ecargo replied the topic: #307741 06 Mar 2020 13:20
There is no reason that I should like this game given my typical gaming preferences, but I love Summoner Wars and own everything. I don't play it often, but that doesn't stop me from frequently staring fondly at my Master Set box on the shelf.

I have mixed feelings about the announcement that they are working on a 2.0. On the one hand, more stuff! On the other hand, clearly second editions render all my stuff THOROUGHLY UNPLAYABLE. /sarcasm

1) I got yelled at on the original Plaid Hat message boards (shortly after they were created) by Mr. Bistro for reasons unclear to me now.

2) SW was one of the few games where I actively enjoyed each new bit of content. Never had a problem buying the new decks because I knew they would be fun & interesting (and playtested well.) And they always were.

3) I would wager if 50% of the dim bulbs who willingly lay down 200 shekels for the latest Kickstarter bucket-o-minis game just spent $50 on a used lot of Summoner Wars stuff, they would get more enjoyment out of the SW stuff than the KS dreck, and it would scratch a similar itch.

4) I still think some of the art was kinda bad. No offense to the artist, if they are reading this.

5) If I recall, this was one of the first notable hobby games to do the special promo cards (mercenaries) that were only available under certain circumstances (like ordering direct from Plaid Hat.) I also think they were an early item when BGG first opened their storefront. Khan Queso FTW!

dysjunct replied the topic: #307746 06 Mar 2020 15:42
I really liked it at first but the strategy of attacking your own units soured me on it. Seemed really antithematic.

dysjunct wrote: I really liked it at first but the strategy of attacking your own units soured me on it. Seemed really antithematic.

Then don't allow it.

I really like Summoner Wars, even if my boy can make it last two hours.

dysjunct wrote: I really liked it at first but the strategy of attacking your own units soured me on it. Seemed really antithematic.

There were some quirks and general issues with turtling that showed up in high level play. Here's hoping that second edition retains the charm without some of the bugs.

One of my favorite games of all time, though I rarely play it now. I don't have many willing opponents live since I played so much in testing and on the app.

That ownership thing WILL change for 2nd edition as I'll actually be able to keep up for as long as I'd like. I'm more excited for this than any other recent announcement that I can remember.

drewcula replied the topic: #307765 07 Mar 2020 09:44
I bought in early, and was happy to support Colby and Co.
Ten factions, sleeved and summoned.
Shortly after that first big box release, I sold it all.
It wasn't getting played.

It's a clever game and I enjoyed my (limited) time with it. I may have tried to push it more with friends, but I didn't. Why? I think in large part it was because of the artwork. The illustrations are horrible. Digital drek.

DarthJoJo replied the topic: #307767 07 Mar 2020 11:21
My feelings are pretty well summed up by Dan Thurot’s recent discussion of the game (namely I loved it until I dabbled in online play and learned about killing your own units and dropped out of the game shortly before the Alliances box), but I have to push back against the dismissal of the art.

Are we talking about the same John Ariosa? The lead artist for Summoner Wars, Dungeon Run, City of Remnants, Mice and Mystics and a bunch of John Clowdus’ games? I love his work. In a time where the World of Warcraft aesthetic was still huge, his designs ran simpler and cleaner but with plenty of texture and personality.

I do think the art fell off around the Alliances box and looked half-done or leaned too much on glowing effects, but Ariosa’s work is solid.

I listened to the PHG podcast released today. They talk a bit about Summoner Wars Second Edition, which will start pre-orders on March 1st. The buzz I've seen from playtesters has been positive. I know they've got all new art (same artist as their Crystal Clans game I think...) Also on that day, it sounds like players will have access to two of the factions in a browser-based app which will have AI as an option. That seems like a smart choice given current conditions.

Vysetron replied the topic: #319303 17 Feb 2021 21:07
SW 2nd ed is the most excited I've been for a game in recent memory, and them launching the digital version alongside it is huge. Casting off Asmodee's shackles and buying their soul back, followed by Ashes coming back, followed by this? That's the Plaid Hat I fell in love with.
Read More...