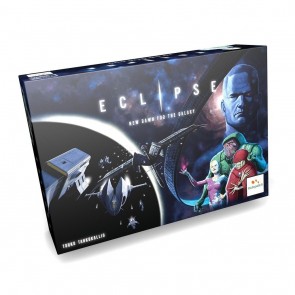 Eclipse designed by Touko Tahkokallio was, released in 2011.

It is a 4X game in which you must lead your civilization to prevail over the others. When it was initially released it was heralded as a streamlined and refined Twilight Imperium 3 "killer."

This game is amazing, it’s an innovative and highly evolved design that represents the very best of both American and European design concepts. So fucking what if there’s not some lame ass back story that tells you the history of the fish folks of Flingflarn or whatever. So what if there’s not piles of cards that tell you how to interact with other players. Tell your own stories and bring your own politics, and this game is just as bloody, ruthless, and violent as any classic DoaM game, but with a fraction of the bulk. It’s a bonus that the game also features an absolutely brilliant economic system that makes for lots of interesting decisions and tough choices. My Hellfire Club crew universally proclaimed TI3 dead after we played this.

On this site Eclipse was a divisive game with some people praising highly while others reviled it.

This was noted by Charlie Theel noted in his blog:

I know you're all groaning but Eclipse is one of my favorite games and I'm willing to stand by that until I die.

Which camp are you in. Love it or hate it? Do you still play it.

Discuss this article
Log in to comment
Posts in discussion: Flashback Friday - Eclipse - Love It or Hate It? Do You Still Play It?

charlest replied the topic: #300848 16 Aug 2019 12:47
One of my favorite games. Played close to 30 times over the years. Still remains a relevant piece of design work that's extremely clever in how it utilizes economic systems in a very easy and fluid manner that requires little to no math.

What I particularly appreciate is how easy it is to jump back into this game, especially for its weight. The player boards and user interface have all information intuitively displayed and it really leads you through its systems.

Really enjoyed my last play of this in May and am looking forward to the new edition.

Shellhead replied the topic: #300849 16 Aug 2019 13:11
Is Eclipse the game where both the winner and loser in a combat get to draw vp chits? If so, that is precisely why I will never even try Eclipse.

It resembles a participation trophy. A Euro way to keep a game artificially close.

It resembles a participation trophy. A Euro way to keep a game artificially close.

That is definitely true, however, psychologically it creates a huge incentive for combat and interaction. My plays of Eclipse have included much more combat than my games of TI3/4.

Michael Barnes replied the topic: #300854 16 Aug 2019 15:02
The point isn’t balance or a participation trophy. The point is that these kinds of games have a “Cold War” problem where combat is effectively discouraged in favor of build up. The risk of material loss too often outweighs the value of any gains. So you have people sitting on these big fleets unwilling to risk a major, potentially crippling defeat. Under the system, the risk is mitigated because you can still stay on track if you lose. The winner always gains more, regardless.

So the comments about this have always struck me as a little off...I’d much rather play a game with lots of small, impactful battles than one 6 hour one where players amass a mountain of forces and wait to see who blinks first.

RobertB replied the topic: #300855 16 Aug 2019 15:10
I'm with charlest on this. I've seen a lot more fighting in Eclipse than I have in TI3/4. A lot of my TI3 experience has been 4+ hours of everybody staring at each other until someone gets bored to tears and starts a fight with their neighbor just to use that pile of stuff that they built. I think those 'participation trophies' actually make you fight.

As far as the game itself, I like Eclipse a lot. Those missiles need to be fixed (and sort of are in the first expansion). And you can get hosed on your first few tile draws just like you are in ST: Ascendancy. But I'd play it again tonight if I could get a game going.

ETA: Mr. Barnes beat me to it.

Josh Look replied the topic: #300856 16 Aug 2019 16:08
Comparisons of Eclipse to TI are dumb and demonstrate a lack of understanding of what TI is, full stop. One is ultimately a negotiation game and one is ultimately an economic one.

The comparison originates in the Eclipse designer diaries, which shows that the designers of Eclipse also do not understand TI. They set out to address what they felt were “problems” with TI, not stopping consider why those systems were in place and how they contributed to the end result. What they delivered is a game that looks like TI on the table but doesn’t play anything like it.

And thank Crom that it doesn’t, because Eclipse sucks. It has a clever UI in its handling of its economy and a killer ship design system, but the game is dry, tedious, and offers nothing to get emotionally vested in. You’re competing against systems and mechanics in Eclipse more than anything else, while TI is a much more social, negotiation based game. It’s longer, but worth it.

More combat? Who cares, it’s still boring. I’ll take TI in that area as well, I’d much rather have it occur less often, plus it carries much more weight. Neither game has good combat.

I think I played Eclipse 15 times or so, so I *get* it. But I kept searching for what the buzz was all about, what I found is that it’s nothing but hype and drinking the Kool Aid. It fucking sucks.

Kevin Klemme replied the topic: #300861 16 Aug 2019 20:14
I thought Eclipse was terrific at first but quickly got bored with it--it seemed to play the same every time. Sold my copy long ago.

Msample replied the topic: #300898 18 Aug 2019 12:23
There are certainly some clever concepts in ECLIPSE and the physical system design is one of the best I've seen. But after repeat play we found there wasn't a ton of variety in game play style; at player counts over 4, one or two players invariably get hosed with crappy tile draws and are left without much production and fall behind . Sold it a few years ago. They have a new edition that funded a year ago on KS with some tweaks I guess, I'll be interested to see what changed . I suspect the same underlying issues will remain .

Matt Thrower replied the topic: #300905 19 Aug 2019 04:34
I really enjoyed my plays of the app version, but I sold my physical copy, unplayed because I never, ever get games like this to the table any more.

Yugblad replied the topic: #300907 19 Aug 2019 09:30
This is another one of those games where I'm the only one in our group that doesn't really enjoy it.
It's been a while, but I remember players getting hosed by early, craptastic system draws - wild swings that massively affect build-up, like you can get in Star Trek Ascendancy.

dysjunct wrote: Tried playing the app version and decided that I couldn't be bothered after about 10 minutes.

I've only ever tried the app version as well. I probably got through 3 or 4 games before I gave up. I can't recall a game with a more jarring disconnect between how cool it LOOKS, and how boring it is to actually play. Playing it in real life has to just be excruciatingly dull.

ChristopherMD replied the topic: #300920 19 Aug 2019 21:10
Put me down as a fan of this game. I must be because despite being such a shelf toad that I never bothered to punch Shadow of a Rift, I still haven't sold it. Even when prices were high before 2nd edition was announced. Its a fairly quick and harmless resource management game with a better setting than the Mediterranean or Bulgaria in 1237 or whatever. While not a perfect game it does check a lot of my boxes for space empire-building. In fact, I'm in the camp that likes any good space empire-builder so will gladly play Eclipse, Twilight Imperium, Space Empires 4X, Ascending Empires, and so on.
Read More...