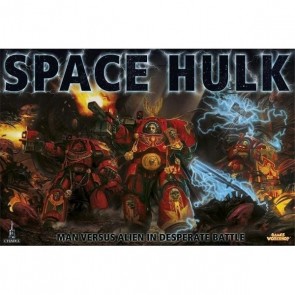 From the depths of space an ancient vessel drifts slowly towards the Imperium of Mankind - a space hulk. Within its confines, untold thousands of Genestealers slowly emerge from hibernation...

The first edition of Space Hulk was released by Games Workshop in 1989. A second edition, with new artwork amd minis, as well as more simplified rules, was released in 1996.

The release of the 3rd edition in 2009 was a momentous event, with the game selling out within a week of release despite its heftly, for the time, price tag of $100. This edition is probably best known for it's high production values, with unique, detailed minis specifically designed for Space Hulk and thick tiles. It's rule set were essentially the same as first edition with only one change regarding Terminators not losing overwatch status if they jam thier guns.

In 2014 the 4th edition of Space Hulk, which was essentially a re-release of the 3rd edition, sold out in 24 hours after pre-orders opened on teh Games Workshop website.

Were you able to get a copy of one of these editons? Do you still play it? Do you love it ot hate it? And is Space Hulk really responsible for introducing "Overwatch" into the board gamer's lexicon?

Discuss this article
Log in to comment
Posts in discussion: Flashback Friday - Space Hulk - Love It or hate It? Do You Still Play It?

I enjoy the game, but I think I'd rather play Deathwatch Overkill.

charlest replied the topic: #300602 09 Aug 2019 08:51
I'm a big fan of the game and how it evokes the feel of Aliens. However, I'd much rather play Claustrophobia at this time which is simply faster and more interesting.

Josh Look replied the topic: #300604 09 Aug 2019 09:41
It's still one of my absolute favorite games. Haven't played in a long while, but would do so in a heartbeat. Claustrophobia is also very good and abstracts things in some interesting ways, but it can't hit those moments of pure, visceral excitement that Space Hulk does.

Shellhead replied the topic: #300605 09 Aug 2019 10:13
Space Hulk 3rd is good but not great, and I haven't really gotten my money's worth from it yet. The minis are great, the cardboard tiles are fantastic, and the overall production values are great. The gameplay is very solid, and it plays at a brisk pace in a reasonable time frame. However, there are only 12 scenarios, and they have limited replay value because each represents a tactical puzzle to be solved. Once solved, repeat plays offer modest variation strictly due to good or bad die rolls. The space marines are much more challenging to play than the genestealers, to the point where there might as well have been some solitaire rules included to automate genestealer movement. Dollar for dollar, Death Angel delivers the same theme and action at a much more reasonable price point, and with much greater replay value.

I suspect I'll keep both in collection. The new Claustrophobia? Still on the fence. Earth Reborn? It's getting closer and closer to the sell pile.

fightcitymayor replied the topic: #300611 09 Aug 2019 11:11
I thought Incursion came close to being an improvement (Nazi zombies over Genestealers) but Space Hulk is still a worthwhile game. Amusing that GW's subsequent crush of boxed game products might be the biggest factor in it being knocked down the "all-time greatest games" list. It gets lost in the crush of whatever skirmish game GW sells that week, but it deserves a better fate.

ubarose wrote: We have 3rd Edition. The Genestealers fall over a lot. I need to glue some pennies to their bases to fix that. I heard the problem was fixed in 4th edition.

We used goldfish and it worked well.

But I love that Flashback Fridays are back!

Shellhead replied the topic: #300622 09 Aug 2019 13:44
One other problem with Space Hulk is that the setup time is lengthy compared to the play time. In theory, players are supposed to mitigate this and the imbalance between the sides by playing a scenario twice in a row, with players switching roles. But because each scenario is a tactical puzzle for the space marine player, it often feels like the space marine player in the second game has an unfair advantage.

Michael Barnes replied the topic: #300634 10 Aug 2019 11:12
Space Hulk is one of the ur-games. Countless games have come, gone, and are on Kickstarter that have tried to copy what it does to varying degrees of success. But none have bettered it. I played it just the other day with a friend and was once again blown away by its simplicity, atmosphere, and ingenuity. Why bother with most of the imitators.

Fun story. I had a girlfriend that left her previous boyfriend to be with me. This dude was a nightmare. One of those growly death metal dudes really into Morbid Angel and Cannibal Corpse. He harassed the shit out of us, all day at school and afterwards. One day we were in the hall at school and he came up bothering us. He called me a “red haired f####t” so I turned to my girlfriend and kissed her full on. Guy just started hammering me, tearing up my brand new Dead Kennedys shirt. I threw my arms up to show that I was not fighting and I didn’t get in trouble. So, I actually called the police on him and had him arrested. His mom offered me $200 to not press charges so I took that money and blew it at Oxford Games and Comics. It was on that day in 1992 that I bought Space Hulk.

I think it still holds up - the new GF9 ALIENS: Another Glorious Day in the Corps game certainly seems to think so - cloning it in many ways, but I doubt it'll better the old dog.

We didn't play the Deathwing expansion much, and the Genestealer box I detested. Kept the Campaigns expansion hardback for nostalgia, more than anything else.

Played the game again a few times in 2017 - the scenario where you have to defend a reactor room, and the marine player gets to set up his defenses before the aliens start. Terrific fun, and a thematic take on the colonial marines and Ripley defending the Hadley's Hope HQ and medlab.

Sevej replied the topic: #300721 13 Aug 2019 21:07
I enjoyed the single player iteration on the PC, but everytime I think about buying it, I decided I can't stand playing as the genestealers.