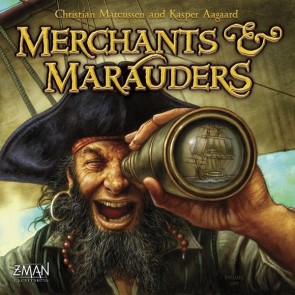 The smell of the salt breeze. The creak of rigging in the air. You’re in sight of the port of Tobago, when you see a ship off in the distance, on an intercept course. Word from the crows-nest is that the ship has run up the fleur-de-lis. The French Navy! You order the crew to man their stations and load the cannons. As the larger ship draws closer, volleys of fire are exchanged, shattering masts and shredding sails. All at once, grappling hooks sail from the enemy ship. They’re trying to board! As the enemy pours onto your ship, your crew fights to the last man. Will you survive long enough to protect your precious gold and valuable cargo?    - Nate Owens

Merchants & Marauders is considered by many to be the definitive pirate games. It was even among the games included in the article Top 5 Adventure Games here on TWBG. Some players, however, find the multiple systems of Merchants & Marauders cumbersome, and have sought out more recent titles such as Black Fleet for piratey fun.

What do you think? Love it or hate it? Do you still play Merchants & Marauders?

Discuss this article
Log in to comment
Posts in discussion: Flashback Friday - Merchants & Marauders - Love It or hate It? Do You Still Play It?

the_jake_1973 replied the topic: #299832 19 Jul 2019 10:10
Still hits the table frequently. The expansion added so much to the game that it is hard for me to justify pfaffing about with a different pirate game. The ship to ship combat was tough for some of my group to come to grips with, but it never fails to provide the drama that a player is looking for.

This game is tops in my group.

ubarose replied the topic: #299838 19 Jul 2019 10:41
I agree that the expansion really added a lot to the game. Although, we really haven't played it in a long time. The big hurtle for us is teaching it to new players. It feels like it takes almost as long to teach it as it does to play it.

ubarose wrote: I agree that the expansion really added a lot to the game. Although, we really haven't played it in a long time. The big hurtle for us is teaching it to new players. It feels like it takes almost as long to teach it as it does to play it.

Combined with being pretty unforgiving.

The caveat being that I have not played Xia with the expansion, which I hear fixes my few complaints and would probably boost it into here somewhere.

M&M is just too damn good. I really enjoy the high stakes ship to ship combat - and even find the heavier weight of it appropriate for the amount that occurs in the game. The two dimensions of pirate vs. merchant are well rounded. Ship upgrades and new ships are wonderful.

The game also has a very unique feeling of truly being alive. This occurs through the event deck + missions + rumors combo. I really love how nations can go to war and I was hoping for some similar presence of war in Outer Rim.

The expansion is great also, as already mentioned (I personally love the Spanish treasure ship which lets me replay Black Sails in my head).

The game offers you the choice to be a merchant or a pirate, but the captains really rope you into a playstyle. While any other game of this type also has captains with special powers that lend well to a playstyle, those other games tend to have other options for victory. M&M just has the two, and that illusion of choice has always bothered me. Sure, you could play against type but why?

The AI ships do not work. I’ve managed to play at least a dozen games of M&M at 4 players, not once have I seen them do anything other than be an obstacle you sail around.

The combat system is AWFUL. The rest of the game is pretty easy and intuitive, but here’s this bullshit, convoluted mess of a system that really does the game a huge disservice. Sure, it has lots of options and details, but none them work towards making the game fun. Completely unnecessary, could have been done much better.

It’s also really picky about player count. You need 4, full stop. Anything less is a noticeably more boring, dry experience. Other games of this type tend to play not as well with 4, so there’s that.

It’s pretty and it’s about pirates, but the gameplay is bland and uninspired, and this was true even when it came out.

Preferring M&M at this point feel like preferring the extended director's cut of the Lord of the Rings movies. Sure, it's an epic experience I guess, especially if you like watching people hike. Or sail in this case.

M&M is discussed on this site every couple months either by itself or using it as a benchmark to compare similar-type games to. It's never gone off the radar and probably never will. It is a masterpiece work among board games.

Michael Barnes replied the topic: #299882 19 Jul 2019 19:52
I’m in the pro-Black Fleet camp. It’s just the tighter, more concise game. Although M&M is definitely a good one, and it is the most comprehensive pirate game out there. It really does a lot, especially with the expansion.

Jackwraith replied the topic: #299893 20 Jul 2019 16:17
In semi-contrast, I'm in the pro-M&M camp. I get what people are saying about Black Fleet's tighter design and I agree with them. I enjoy it, too. But when I'm playing a game about being a pirate, I want the chrome that M&M brings. I want there to be those flavorful rules that may seem a little fussy but give your adventure game a storytelling experience. No one ever says "Remember that Black Fleet game where X happened and then Y happened and we were all like OMG?" People say that about games like Talisman and Runebound and M&M because that chrome is there to help create those memorable games. Josh's point about the captains enforcing a playstyle is valid, but if you want variety in approach, you can always pick different captains from game to game. It's also not ironclad. I've tread the middle line between pirate and merchant MANY times and won because I was an opportunist, which is exactly what a merchant/privateer/pirate often had to be in those days. That said, Gary's point about the unforgiving nature of combat is certainly true. There might have been a way to make things a bit easier to stay in the game.

I don't play it much anymore, but I will likely never part with it.

Legomancer replied the topic: #299913 22 Jul 2019 07:48
I like M&M but Black Fleet, Xia, and Western Legends have fired it, along with perennial fave Merchant of Venus. The combat is just so janky and lethal that the other games end up being more fun.

san il defanso replied the topic: #299948 22 Jul 2019 22:11
I still like it, but I haven't played in a few years. I do agree that Merchant of Venus is the better game, particularly from the standpoint of economic stuff. The big thing that M&M has going for it is all the little flavor touches. It's probably as close as well get to Sid Meier's Pirates in board game form.

I agree that the combat is a little too high-stakes and deadly. I've seen people recover from losing their ship to win, but the risk is probably too high, and the rules are probably too complicated.

Regarding being a somewhat bloated design, that's sort of true, but I reject the idea that every game needs to be as streamlined as it can be. Maybe that's true from a design standpoint, but experience counts for something, and I think the experience of Merchants & Marauders is top-shelf.

I'm not sure why I never got round to playing it. There just always seemed to be marginally more accessible or more interesting or more hyped games around to play instead.

I've now got Treasure Island, which is a totally different type of pirate game, but one that still fills the itch for rum and bones should it arise.
Read More...