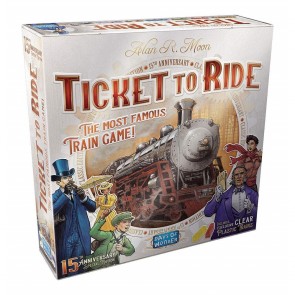 Ticket to Ride is celebrating it's 15th anniversary this year.

Ticket to Ride, by Alan Moon, was published by Days of Wonder in 2004. It won both the Spiel des Jahres and the Origins Award for Best Board Game of 2004. It went on to win numerous other awards, and by 2014 had sold over 3 million copies. Over the past 15 years, Days of Wonder has released six additional stand-alone Ticket to Ride variants (Europe, Marklin, Nordic Countries, Germany, 10th Anniversary, Rails & Sails) as well as seven map collection expansions. Its seventh version, the 15th Anniversary Edition, was just released this month.

For many board gamers, Ticket to Ride was their first introduction to modern board games. Was it yours? Do you have a favorite version, or a favorite map? Love it or hate it? Do you still play it?

Discuss this article
Log in to comment
Posts in discussion: Flashback Friday - Ticket to Ride - Love It or Hate It?

That being said, the timing here is funny because I just sold my copy this week. It sat on my shelf played only one time in the past 7 years. I was waiting until my daughter was older but recently picked up TTR: First Journey, which my wife actually enjoyed more than base TTR (due to it being faster). We will probably graduate to the new and quicker NY version eventually and I'll probably never see the standard game again.

Erik Twice replied the topic: #301248 30 Aug 2019 11:08
I actually played this game for the first time a couple months ago. It was pleasing. Nothing I would make an effort to play, but it was very relaxing.

Michael Barnes replied the topic: #301249 30 Aug 2019 12:00
I went through a period where I hated it- but I eventually realized that I was just sick of it. It got played quite a lot around 2004, and that was also when the the Ameritrash thing was really firing up and I was looking to play more Guerilla or Gunslinger than this kind of thing. I decried it as “Rummy with a board”...but that is actually what makes it such a smart game to begin with. Like Catan, it uses classic, basic mechanics to create a very accessible game.

I have played "Ticket to Ride: First Journey" with my spawn. It's a pretty good distillation of what TTR is. It's even shorter and lighter. The only difference is that you don't get a choice of tickets to draw. A good little game.

We own Ticket to Ride Europe, but probably haven't played our own copy in years. Not because we don't like it, but because we have a friend that owns Ticket to Ride EVERYTHING. So we play fairly often with her. In fact, back in April she hosted a Ticket to Ride marathon party - 12 hours of Ticket to Ride gaming. We stopped by and got a few games in, including my first game on the Pennsylvania map which adds a stock aspect to the game, NY, and Team Ticket to Ride. But I think my favorite is still the original version.

BillyBobThwarton replied the topic: #301259 30 Aug 2019 14:45
It’s never what I WANT to play, but I do quite enjoy playing the Nordic Countries and the Switzerland maps with both my wife and my 8 year old. I enjoy the tension of grabbing vital routes, the agony of not getting that one color you need, and the times when my wife will block a route out of spite (a side of her I rarely see outside of a board game).

Gary Sax replied the topic: #301261 30 Aug 2019 16:01
I get where you guys are coming from, I had an edgy cool guy thing on this game too, probably. But this is a game, even now that its buzz has disappated, that I do not enjoy. I would play a game Splendor 10/10 times over this. There's something about the set collection and nature of decisionmaking that's a real snooze for me.

The kids like it though, so what I have now done is cobbled together stuff that keeps me interested - stations, passsengers, a few house rules - and I don't mind it these days.

ecargo replied the topic: #301278 31 Aug 2019 15:48
I don't play it often, but every time I do, it's always enjoyable. I own almost all the maps / versions. Having the variety keeps it fresh and can also tailor what kind of experience to have (i.e., simpler or more complex).

boothwah replied the topic: #301279 31 Aug 2019 16:02
Own two versions. Bought during the golden days of preteens being in the house, after Cataan, and Carcassonne. The kids live it because if was their Monopoly, the mindless game they wasted rainy days with friends with.

I loathe it and will only play it to spend time with my girls. What a boring, dull game. I'd rather play a host of set collection card games with a standard deck.

Ah_Pook replied the topic: #301280 31 Aug 2019 16:05
I like TTR whenever I play it, but if it's my choice id rather play something else in that time frame. My wife and nieces/nephew really like TTR so I do play it with some regularity. My favorite map is the Pennsylvania one. The stocks are a fun twist.

Splendor, a game you can play at a funeral.

We had a good time, it plays pretty quick and it typically over before family bickering starts. We used the Big Cities cards so there was some pushing and shoving at the center of the board. My 16 year old typically wins and goes with the tried and true build as many 6 train routes as you can strategy. I always try for the tickets and more often than not move backwards on the points. But this time I had it, 6 routes completed- everyone else only had 2 at that most! Well right up to the point where my family pointed out that I never played a one route into Houston (this was one of those tickets you pull and are all confident that you already completed it when completing a different route)for a 8 point ticket. Putting me back to 1 point behind the 16 year old.

IT was a pleasant why to hang out with the family on a holiday Monday.
Read More...